Raiders fans, the draft will be here in a couple months. The most crucial and vital part of the team that needs to be improved from the draft is the Tackle position. Fortunately, this year's draft class possesses an impressive amount of talented Tackles. The top three that stick out are Eugene Monroe, Andre Smith, and Michael Oher. Who is right for the Oakland Raiders?

Eugene Monroe is by far one of the fastest linemen out there. A perfect fit for the difficult tackle position. This 6'6, 315 pound specimen has one of the best legs ever seen on a linemen. He won the Jacobs Blocking Award for his impressive blocking. He lacks strength, but his friskiness makes him a powerful force. Additionally, all linemen in college are significantly weaker than the linemen in the NFL. So, he will have to work on his strength just like the rest of the linemen in this year's draft. However, not every linemen in the NFL has feet like this kid. There is one downside to Eugene Monroe. This is he hasn't faced difficult opponents in his college career. We will never know how good he really is until he arrives in the NFL. However, I would like to mention he faced one of the best defensive linemen from last year, Chris Long, at practice everyday. So, he does possess some experience. However, given time, he will turn into a force. 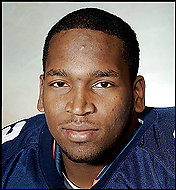 Andre Smith is probably the most impressive tackle from this year's draft. He is 6'4 and a big 330 pounds. He was a finalist for the Lombardi Award, an award given to the best offensive or defensive linemen or linebackers of the year. Unfortunately, he missed receiving the award by a couple votes. He is very impressive with his run blocking. He is the best, in my opinion, in this year's draft. Something the Raiders need to get McFadden, Bush, or Fargas going. He played his college career in the SEC, so he did go against difficult defensive opponents. He has a lot of power and enough speed to be very successful player in the NFL. All the scouts have this kid, Number 1, on their board. He is definitely the most prepared for the NFL than the other tackles. His strength is already at the NFL level and in a couple more years, he can only get better. The only issue with this kid is he missed the Sugar Bowl this year, against a good Utah team. This would've been a great test for the senior prospect, but he was suspended for this game.  It wasn't a serious issue as said by the coach, Nick Saban, but it is something to keep in mind. Other than that, he is the best tackle in the draft. Getting him will secure the tackle position for years to come.

Next to Andre Smith, he is the second best tackle in the draft. This 6'5, 325 pound giant is a great blocker. In fact, he was considered one of the best from his freshmen year in college. He moved around everywhere on the line so he is familiar with a variety of blocking schemes. Additionally, this means he is both fast and powerful. He played in the SEC so everyone knows he faces tough defenses. He was supposed to come to the draft last year, but decided to stay back. Now, he is more than ready for the draft. Some even say he might be better than Andre Smith. He was named First Team Freshman All-SEC a couple years back and he has gotten better ever since. This talent can insure the Raiders at the tackle position for numerous years to come. The only bad thing about this kid is he is the oldest from the rest of the pack coming into the draft. However, he is still 22.

Who Should The Raiders Grab?