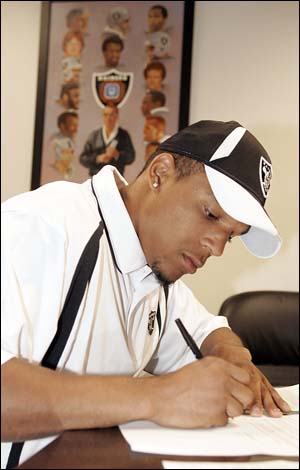 Greetings Silver and Black Pride community! I am pleased to bring to all of you the 8th installment in the series, Talkin' With Tyvon, from Raiders starting strong safety Tyvon Branch.

Following the big upset win this past Sunday over the Philadelphia Eagles, Tyvon, clearly encouraged by the way his team performed along with the intensity that accompanied it, has returned to our Community to answer your questions.

Hello Raider Fans! It was a great win for us this past week. The Eagles had a lot of weapons, and I think we did a great job of slowing down their attack. I think our confidence is growing, and we look forward to playing the Jets this weekend. We are watching a lot of film and our confident in our ability. I think our intensity was where it needed to be, and we look forward to bringing it out again this week.

SABP: Congratulations Tyvon on a great win against the Eagles. It seems the team played an inspired and passionate game against the Eagles, the complete opposite from the previous week against the Giants, where afterward, LB Antonio Pierce said playing the Raiders was like "playing a scrimmage". Did the Pierce comments play any part in firing-up and motivating the team to really bring it Sunday?

TB: Things like that are a motivator to a point. We are all proffessionals, but if that is how he felt after the game, then we need to step it up. No one likes to be talked down upon, and that gave us some spark to get after it last weekend. Now we have to carry it over.

SABP: Everyone was surprised, especially the Eagles, about the defense which the Raiders threw at them Sunday. There were frequent blitzes, mixing in the Cover 2 and zone blitzes. First of all, was that defense fun for you? Secondly, will we be seeing more of that kind of defense from the Raiders throughout the season?

TB: That defense was fun. As a defender it is always good to be able to switch it up and run around a little more. I think it keeps the intensity up. We are definitely keeping our options open, and will tailor our defense to the team we are playing each week.

SABP: When the Raiders took the lead in the game, did the defense recall the many previous games where the team let up a bit and became less aggressive but now this time played a full 60 minutes of aggressive football?

TB: You know that is interesting because one thing we talk about out there is just keeping up the intensity and not letting the past repeat itself.

SABP: I noticed that you were not exclusively covering Celek the TE on Sunday and actually rolled over and covered the Eagles wide receivers on a few occasions. Was that a result of what the Eagles were running or the new defensive scheme employed by John Marshall?

TB: It was a mix of both. We saw some things on film and changed things up. Also, what we had been doing has not been super successful, so it is important to always give different looks.

SABP: The reeling Jets are coming to town with their rookie quarterback. Does the team now feel they can build off of the Eagles game and play the same level on a consistent basis for the rest of the season?

TB: Building off a win is something we always look to do. Each week we just try to get one game better. Consistency has been a bit of a problem, and we look to keep that going.

Thanks Tyvon and looking forward to another win Sunday against the Jets.