Share All sharing options for: Previewing the Enemy: Denver Broncos 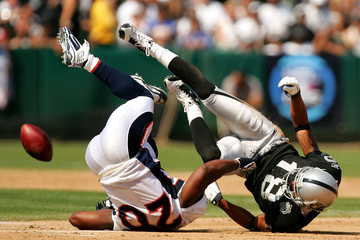 Earlier this season, Denver won a topsy-turvy 23-3 game in Oakland. [via www4.pictures.zimbio.com]

Unfortunately for us loyal fans of the silver and black, the season isn't over quite yet. With Bruce Gradkowski out, our already slim chances just became even slimmer. Coming off of a blowout loss at the hands of the Washington Redskins, we next face our hated rival in the Denver Broncos. Denver's real season hasn't even yet started. Sitting at 8-5 and atop the AFC Wild Card, the Broncos in great position to grab a playoff spot. I'll admit that I did in no way see this coming from this Denver squad. They've definitely proven a lot of people wrong as they continue their final push into the playoffs. A familiar opponent to us, let's see what we're up against this Sunday.

Wow, the Broncos have really cooled off after a great 6-0 start. Just 2-5 in their last seven games, the Broncos still have good wins against teams like the Cowboys, Patriots, Chargers and Giants. They're no slouch.

Let's take a look at the Bronco offense first. 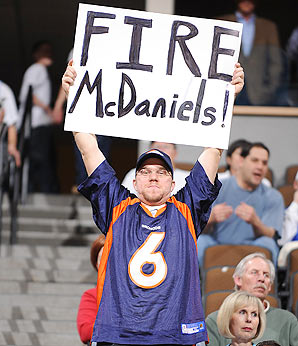 I bet this guy feels like an idiot now. [via stfusports.files.wordpress.com]

Head coach Josh McDaniels is pretty close to being an offensive genius. A disciple of Bill Belichick's, the 33-year-old McDaniels really knows how to run a team at least offensively. There was controversey before the season started, especially revolving around star wide receiver Brandon Marshall. Still, he's around and there aren't any qualms circling around him. In the offseason, the team waved goodbye to Jay Cutler. It may have been the best thing they've done after all.

Kyle Orton, QB: No, he doesn't have the big arm that Jay Cutler does. No, it's not a problem at all. Coming over from the Chicago Bears in an offseason trade that sent Cutler packing to Chicago, Orton has flourished in Josh McDaniels' system. Orton is completing a career-high 63 percent of his passes and will break a career-high in touchdowns and yards before the season concludes. He's a smart quarterback. He doesn't make mistakes. He can make the play, too. What more do you want?

Knowshon Moreno, HB: A rookie from Georgia, Knowshon Moreno didn't immediately step into the starting role. Lately, he has been getting the bulk of the carries. Moreno has carried it an average of 18.2 times over the past five weeks for an average of 82.8 yards. He has also scored three times during that span. Moreno has pretty much taken over the feature back role, although he won't catch many passes out of the backfield.

Correll Buckhalter, HB: Buckhalter was brought over in free agency from the Philadelphia Eagles and has done a pretty good job this season despite not getting the bulk of the carries. Overall, Buckhalter has posted a 5.3 yards per carry average and has been very reliable carrying the football. Like Moreno, though, Buckhalter isn't a threat out of the backfield to catch the ball having no more than three grabs in a single game in two months. 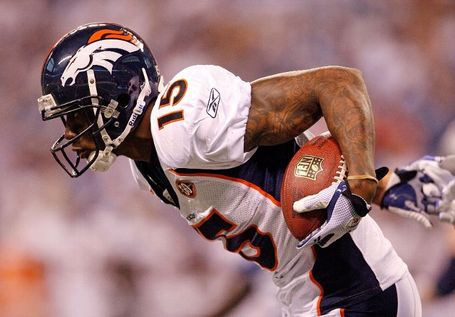 Brandon Marshall, WR: What more can be said about Marshall that hasn't already been said? At one point, we didn't even think he'd be a Denver Bronco. Now, he's tearing up the league. Amongst AFC pass-catchers, Marshall is tied for the conference lead in touchdowns (9), is third in receptions (86) and is seventh in yards (1,008). He is probably headed to a Pro Bowl. In case you missed it, last week against the Colts, Marshall had an NFL record 21 grabs for 200 yards and a pair of touchdowns. It'll be fun to see him matched up against Nnamdi Asomugha.

Jabar Gaffney, WR: Josh McDaniels brought Gaffney over from New England to play in his system in Denver. Gaffney is averaging about 39 yards per game when he does catch a pass as he was shutout in Week 10 and Week 13 each. Still, Gaffney must be accounted for along with the rest of the weapons that go unmentioned during this preview, such as Brandon Stokley. At any given week, one of those these weapons can step up and hurt you.

Eddie Royal, WR: More dangerous in the return game, Raiders fans know all about this speedy little man from Virginia Tech. Last year on Monday night, Royal had a huge coming out party in the opening game. After a great 2008 campaign, this season has been bit of a disappoint for Royal; however, he still makes an impact. As previously mentioned, Royal is a threat in the return game -- both kicks and punts. Not quite as dangerous as someone like Joshua Cribbs of the Cleveland Browns, just ask the Chargers about Royal's prowess.

Daniel Graham, TE: Yet another former Patriot is calling Denver home. With Tony scheffler's status in doubt this Sunday, Graham becomes even more keyed-in on in the passing game. Graham isn't Orton's favorite target or anything, but last week, Fred Davis hurt us with his two touchdown receptions. With all of the guys Orton has to throw to, limit as many of them as you can. Stopping Graham isn't high on the priorities or anything, but just don't let the people who shouldn't beat you hurt you. 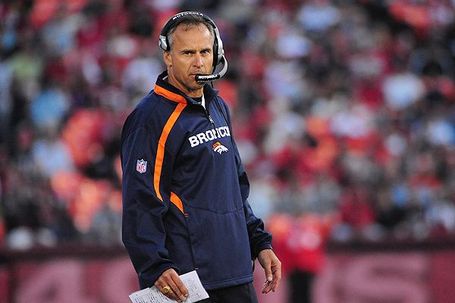 Man, where do I begin with this defense? Last year, they were outright terrible. Ex-49er head coach Mike Nolan steps in, implements a 3-4 defense with the right personnel and viola. Some no-name defensive linemen Kenny Peterson, Ryan McBean and Ronald Fields have stepped in and played well. At the linebacking core, D.J. Williams and Andra Davis are very solid in the middle. Elvis Dumervil, playing the outside linebacker spot and even defensive end, he has become a sack machine. He leads the entire NFL in sacks with 15. With all of that said, the rushing defense is still just a tad above average despite improvement -- dramatic improvement. The secondary is where the defense shines with the pass defense. The team gets great rush on the quarterback and the defensive backs are very skilled. Veterans Brian Dawkins at safety and Champ Bailey at cornerback lead the defense.

Conclusion: Well, it's quiet simple: Justin Fargas, Darren McFadden and all the rest of you running backs need to be ready to carry the load. With Bruce Gradkowski out and Zach Miller's status in question, it only makes sense to pound the rock. Denver's rush defense is ranked 14th, significantly worse than their pass defense which is only worse than the Jets'. JaMarcus Russell or Charlie Frye -- we're all collectively praying for McDonald's instead of Fasto Burger which can be seen on That '70s Show -- will have a tough time. The young wide receivers are up against a tough secondary and it's just setting up for disaster, really. Again, we're going to have to establish some sort of ground game. Use 'em often and use 'em all with the exception of Gary Russell as he should be used in the flat. I don't know what else to tell you. We could be in for a long day. This could easily turn into a 41-6 rout.

Feel free to leave your predictions or even your own thoughts and ideas about the Denver Broncos and how we can earn a win our fourth win of the season on Sunday.