Strengths and Weaknesses: A Look Ahead to 2010

Share All sharing options for: Strengths and Weaknesses: A Look Ahead to 2010

Well Raiders fans, 2009 is drawing to a close and what a bizarre season it was.

A dismal start with a great stretch of impressive wins to provide hope for what appeared to be a step back in the rebuilding process for the Raiders. Instead, there were many things that happened that could affect the Raiders future greatly.

So let's delve into what we can look forward to next year in what I think will be a good year for the Raiders. 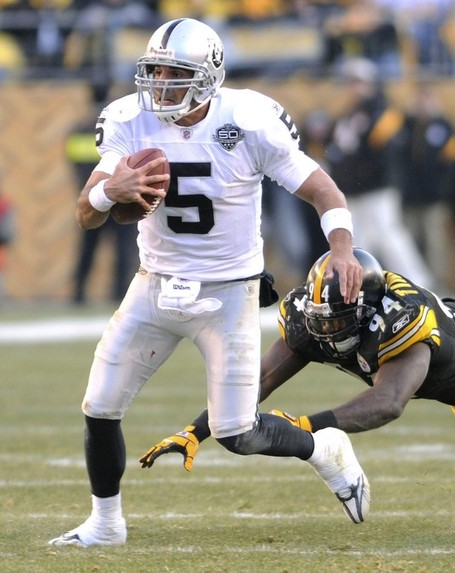 With a young and very inconsistent receiving corps around him, Grad was able to make some truly fantastic plays; with either his arm or his feet. Mobile both in and out of the pocket, he's the perfect QB to play behind a struggling O-Line because of how amazing he is at evading pressure. Dare I say it's on par with Roethlisberger, except we actually have a better line.

He brought two things Russell never could and I doubt ever will, leadership and hard work. He led his men on the field, and he led them off the field. He told them where to be, what to do, and what not to do. He commanded respect and he sure got it. I've never heard such high praise from Raiders players about a Raiders QB.

Grad also has one distinct feature to his game that makes this offense work. Great short-to-mid range accuracy. Davis wants to go deep, but when the deep routes aren't open you can trust Bruce to hit a receiver underneath.

But one has to wonder, will Davis make Russell the starter once more? If Cable is fired (which I honestly think he won't be if he beats Cleveland and/or Baltimore), then that answer is yes. If Russell once again is the starter and Grad for some reason does not return next year, then the Raiders will be starting all over again.

If Grad stays and competes for the starting job and earns it (keyword is earns), then the Raiders are on their way.

Now what of the pieces around Gradkowski, the inconsistency at receiver, the misshapen right side of the O-Line, a suddenly mediocre ground attack?

While this is definitely our biggest weakness, I hold out a lot of hope for the position. In the final weeks of the year we've seen players like Louis Murphy, Chaz Schillens, and Johnnie Lee Higgins making some good plays. And then there's more youth with Nick Miller and Heyward-Bey.

Bey was needless to say a disappointment this year, but i think that his struggles this year will only inspire him more. Bey has the attitude of a guy who won't take his ineptitude lying down. We often forget that Darrius was regarded as a hard-worker. If Grad stays we can expect him to make sure DHB works his problems out and that they get their timing down.

We can't really add anything to receiver other than maybe a veteran presence. We need to remember that this is an extremely raw unit that needs to develop and I think will develop with a leader at QB.

I think it's no secret though that Murphy and Schilens are well on their way to becoming legitimate threats at receiver. Murphy has really caught on late this year and Schillens is picking up where he left off last year despite missing most of the year due to injury.

As for Higgins, I'm not sure what to make of him. Several injuries have limited his playing time and seem to have thrown him off his game. If he can manage a healthy offseason and be healthy early on next year, I think he could refind his ability and become a good slot option.

There's a lot of what-if's with this group, and their success is directly tied to who will be our QB next year.

Right Side of O-Line

Cornell Green and an aging Cooper Carlisle......not exactly the makings of a sturdy right side of the line. Or a disciplined one as they frequently are called for penalties. No doubt there time is up in Oakland. But who is there to replace them?

While I'm sure many of you would like early draft choices to remedy the O-Line, I think rounding off the defense is a more pressing matter while this inconsistent offense grows. There are though some good free agent possibilities.

But before we get there, why not consider Langston Walker for RG? Filling in for Gallery, he's been great in the run game at LG and isn't horrible in pass protection. And I've heard no complaints about penalties about him. I think Walker could be a good option at RG if we can't get anyone else. At the very least he should be kept for competition/backup.

Now then, as for RT, I'd like to see us bring in Willie Colon as a FA from Pittsburgh. He's been a good pass protector (or as good as one can be in Pittsburgh) and it's conceivable that may not resign him if they're looking for a better run blocker for Mendenhall. Colon isn't great in the running game, but he's not bad either. He's just average. But for pass protection, I think there's few better that we could get. An added bonus, he's not as penalty-prone as Green.

Another option at RG is Logan Mankins from New England who seems to be a popular choice for future RG. I'm not sure how he would fare with the ZBS but he's a great all-around offensive lineman on par with, if not better than, Gallery. And with so many FA in New England, there might not be room for them to resign him. If there's one problem I have with him it's that he probably will not only command a ton of money, but I see him struggling in our scheme.

However we go about it, fixing up the RG and RT positions are key to improving the run game and pass attack.

As for the strange dropoff in the running game, you can blame the misuse of a great back in Michael Bush along with the defense stacking the box and inconsistent run blocking. If the rest of the offense gets built up and Bush is actually used then this ground attack will get back to normal.

Despite all the weaknesses of the offense, comes the shining future of the Raiders. The defense. I bring you an image montage of the greatest moments of the defense of 09. 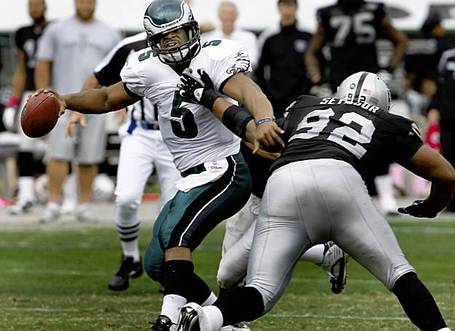 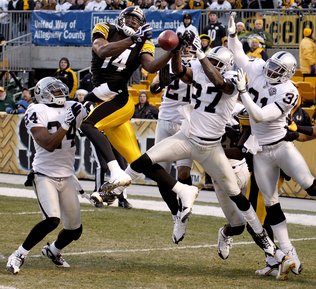 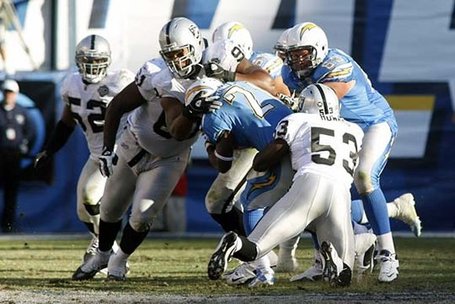 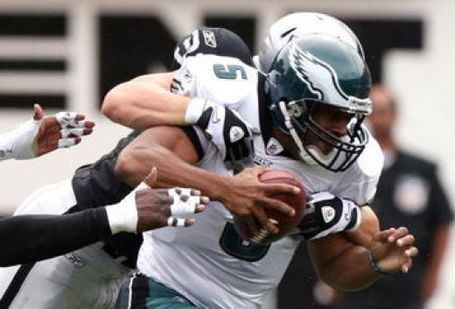 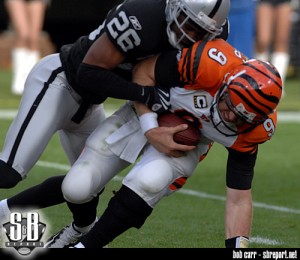 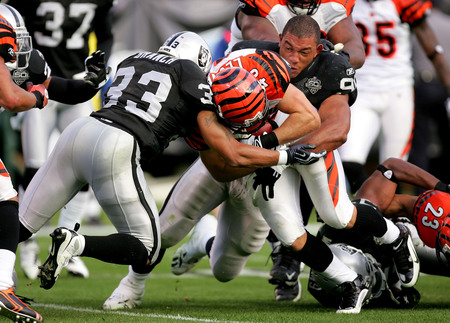 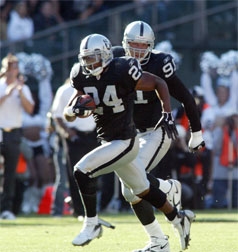 When this defense really played motivated football, they were a fantastic unit. Creating turnovers, making stops in the redzone, forcing critical field goals, so on and so forth. There are definitely a few pieces missing here and there, but as an overall unit this a good D.

So what's lacking? (other than offense to give these guys a break) Well the team is still getting gouged on big runs up the middle. But you have to expect that when all three of your DT's (Kelly, Warren, and Bryant) are all pass rushers. There's nobody who commands two blockers, nobody who eats up gaps in the like he eats up breakfast, we need a NT desperately.

This is where the draft comes in. Though we're out of position for Suh, I like our chances to land Gerald McCoy or Terrance Cody. Either one is a big guy who not only takes up blockers and closes gaps, but also has some ability to penetrate into the backfield. My preference here is McCoy because he also has good pass rush. Either way I think this is a key weakness that needs to be addressed.

But there also needs to be a certain degree of blame put on the linebackers. While we all clamor for Morrison to start at OLB instead of MLB, I can't see it happening after so many years at MLB. He has actually looked better in the middle the past couple games. The real problem though now is SLB. Whether it be Ricky Brown, Jon Alston, Sam Williams, it doesn't matter. Nobody on roster is competent enough to man the spot.

Options for improvement? Well I have an interesting theory that i think could work. If we were to not draft a DT in the first and instead draft a Brandon Spikes or Rolando McClain, we could do as Cincy did with Maualuga and move them to OLB. Both are great run stoppers and would be a nice fit to play the strongside. If it worked with Maualuga, I could foresee it being a huge success with Spikes or McClain.

And the secondary? Well the long-time weakness of safety appears to be cured. Huff is finally becoming a decent safety, maybe better than decent. His coverage skills are better than ever and he's finally a pretty sure tackler.

Though I wonder if Mitchell might be able to usurp Huff from the starting FS spot if he can put together a full training camp and preseason. Mitchell has shown some promise in his very limited time this year and I wonder how good he could be.

One spot that is locked down though is SS where Branch has shined. Branch is incredibly aggressive in the running game, plays tight coverage, and if he ever slips he can pop the receiver for an incompletion.

The rest of the secondary outside the obvious Nnamdi is sketchy. Chris Johnson is very inconsistent, great one play, horrible the next. And Routt is much the same. The point here is that we either need another corner to move CJ to nickel and Routt to dime, or one to play behind CJ and push Routt to dime.

I'd like to see a good free agent corner like a Marlin Jackson (unlikely but I can dream) or an Anthony Henry come in but this would probably best be solved with a late draft pick where Al can flash his sleeper pick magic.

So after getting this all together here is our strengths and weaknesses, and needs in order of priority:

Overall, if we get about 4 of our 6 needs taken care of, this team could be a 10-6 team (if we keep Grad and Cable) But if you account for injuries and the improvement and decline of other teams I'd say 7-9 is more realistic.

Finally I'd like to say I hope all my fellow Silver and Black Priders had a very Merry Christmas, a happy Hanukah, and a crazy Kwanza.