Share All sharing options for: Take Your Pick: Quarterback Edition 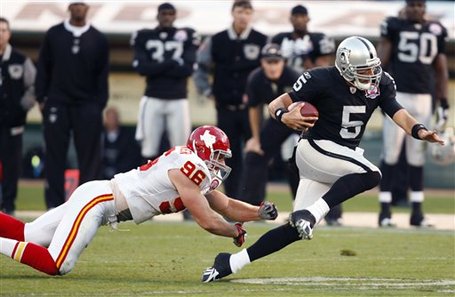 Stability at the quarterback position has been lacking without Bruce Gradkowski. [via cdn1.sbnation.com]

Since Bruce Gradkowski's MCL injuries, the questions concerning the quarterback position have been about who will be the starting quarterback: Charlie Frye or JaMarcus Russell? Yes, J.P. Losman is also on the roster; however, you'd think that the guy hasn't been around long enough to really get to know the plays. Does that stop you from wanting him as the quarterback this Sunday? After Russell led the comeback to lead the Oakland Raiders over the Denver Broncos a few Sunday's ago and after Frye's porous performance against the lowly Browns, there is a question that has to be asked in my opinion. Who is the starting quarterback for the final game of the 2009-2010 season: Charlie Frye, J.P. Losman or JaMarcus Russell?

Cast your vote on the poll after hitting the jump.

Really, the best cases for each quarterback are arguments against the others. 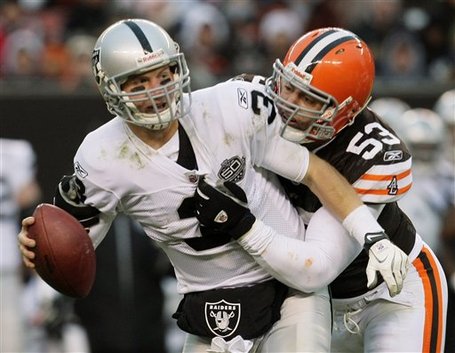 Charlie Frye was roughed up this past Sunday by the Cleveland Browns. [via cdn3.sbnation.com]

Charlie Frye's name really started to surface at a high rate once Bruce Gradkowski went down with those MCL injuries. After JaMarcus Russell's struggles against the Washington Redskins, most of us wanted to see Charlie Frye under center for the game against the Broncos. Since it wasn't Russell, we were at least content with Frye back there. Now, in light of Frye's performance against the Browns this past Sunday, is Frye really the best quarterback? Obviously, he didn't really prove his worth. Well, maybe he did prove it. He proved that he really isn't anything more than a backup at best. 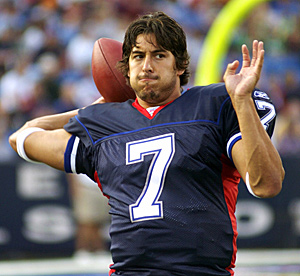 Formerly of the Buffalo Bills, J.P. Losman is back in the National Football League. [via www.thestencil.com]

Recently signed, J.P. Losman is sitting as the third quarterback on the depth chart. Signed on December 15, Losman went 0-for-1 appearing in a game against the Broncos due to injuries suffered by both Charlie Frye and JaMarcus Russell before him. We really didn't get a good look at Losman since he played one snap. Since Losman has only been with the team for about two weeks, how much of the playbook does he really know? Does that matter? The ineptitude surrounding him might make him the quarterback by default. 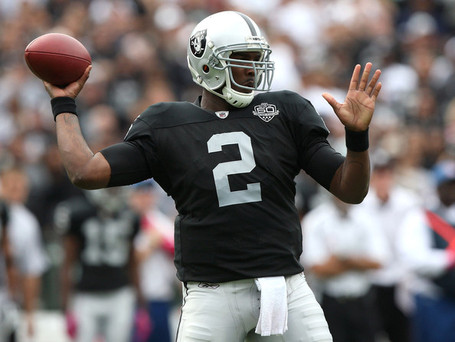 That's one man that certainly doesn't need an introduction. [via www3.pictures.zimbio.com]

Now, we're onto the conundrum that is JaMarcus Russell. I'll spare you the details of this season concerning Russell. Of the healthy quarterbacks, Russell is the hottest having gone 5-for-11 with a game-winning drive against the Broncos. We know how highly unsuccessful he was before that, but in 40 percent of our wins this season it has been Russell leading a comeback drive on the road. This revolving quarterback thing might have it seeing calling Russell's name next. If JaMarcus is in fact the starting quarterback this Sunday, it would only be natural if he had a good game to really throw a wrench into next year's quarterback situation, right? Personally and honestly, I'd give Russell my vote.