Share All sharing options for: Previewing the Enemy: Baltimore Ravens 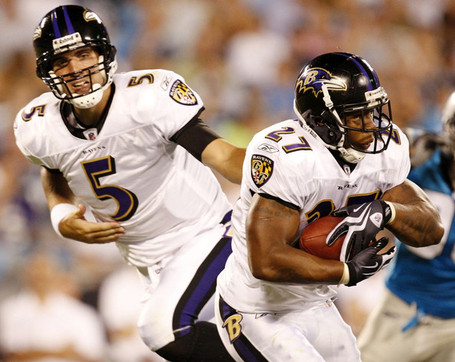 The future is now with those couple of second-year youngsters pictured. [via www2.pictures.zimbio.com]

This is it, folks. Sixteen short weeks later, the NFL season is coming to a close for most teams. Unfortunately, one of those teams are our Oakland Raiders (5-10) as we will be missing out on the playoffs for the seventh consecutive season. For the Baltimore Ravens (8-7) on the other hand, they're hoping that their real season hasn't even started yet. Needing one more win to clinch a postseason berth, Baltimore looks to squeak in with a win over the Raiders in Oakland this Sunday.

Despite this being the home finale, expect another local (75-mile radius) blackout.

Man, this team is steady. Their losses have come to teams that have respective records of 10-5, 10-5, 11-4, 10-5, 14-1, 10-5 and 8-7. They've really beaten everyone they "should have beaten" and do own some good wins against the Chargers, Broncos and Steelers. Four of their seven losses have been by three points or less. If you ask me, this is a team that's better than their record indicates.

Let's take a look at the Raven offense first. 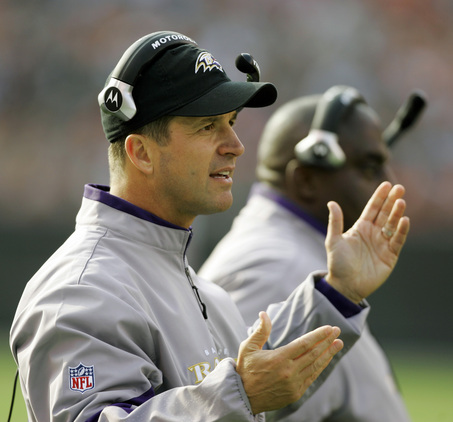 I like this Harbaugh (John) better than the one in Palo Alto (Jim). [via blog.pennlive.com]

Historically, the Ravens are known for their great defensive teams. Heck, they won a Super Bowl with Trent Dilfer as their quarterback. The defense is still there, yes; however, over the past two seasons with John Harbaugh as the head coach along with young talent that you'll see as you read on, the offense has become pretty potent and yet still on the rise. Harbaugh has done a great job as the head coach of this team. As a rookie coach last year, he guided the 11-5 Ravens into the playoffs. In his second year, he's closing in on another playoff berth.

Joe Flacco, QB: A rookie from little-known Delaware last year, Flacco has improved steadily improved in his second year as we expected. The completion percentage, yards and touchdowns are all up as he grows more comfortably in the offense. A big guy with a strong arm, Flacco can really sling it down the field in the vertical passing game. Over the past five weeks, Flacco has thrown at least one touchdown pass in each game with nine in total. In case you didn't know it yet, this young stud is the real deal.

Ray Rice, HB: Another second year player progressing nicely is the man from Rutgers by the name of Ray Rice. Last year, Rice was one of the three running backs used heavily by the Ravens in rotation. This year, Rice is the feature back and has actually gotten stronger as the year has gone on. Three weeks ago, Rice rushed for 166 yards against the Lions. This past week, Rice ran for 141 yards against the Steelers. Not only does he run, Rice has caught 74 passes out of the backfield. Maybe there is a vulnerability in his game, though, with three fumbles in the past four weeks.

Willis McGahee, HB: McGahee has had to deal with not predominantly being the feature back over the past few years. McClain was the guy last year and Rice is the guy this year in terms of leading the team in rushing; however, McGahee is the team leader with 11 total touchdowns combined on the ground and receiving. He has scored at least two touchdowns in four games this season. In 108 total touches (93 attempts and 15 receptions), the former "Tha U" product has fumbled just once.

Le'Ron McClain, FB: Last year, McClain was one of the three backs used in the previously mentioned rotation with Rice and Willis McGahee. This year, McClain isn't really involved in the running game with the ball. He is instead paving the way as a fullback and earned a Pro Bowl honor for just that. After getting just a tick over 900 yards on the ground last year, he'll end up with somewhere around with just 200 yards. He hasn't declined, but rather McClain has embraced a new role as a blocking fullback.

Derrick Mason, WR: Most people didn't even think that Mason would be playing football this season. After the tragic death of former teammate Steve McNair, Mason abruptly retired. Rethinking that decision and coming back has been beneficial to the Ravens. Mason provides a sturdy target as a 13-year veteran of the league. His seven touchdowns this season are the most he's recorded since joining Baltimore in 2005-2006. Over the last three games, Mason is averaging 6 catches for 86 yards to go along with a pair of touchdowns in total.

Mark Clayton, WR: Mark Clayton isn't a baby anymore. This is fifth year in the league since being taken 22nd overall out of the University of Oklahoma. The problem is, Clayton's productivity hasn't lived up to it. After a pretty decent sophomore season, Clayton's reception total has declined in each successive season. Clayton is on his pace for his worst season since his rookie campaign. Injuries may be part of the blame as he has missed the past three games, but in his last four games played, he has only one catch in three of those four games.

Todd Heap, TE: This year, Heap is back on the map. His 51 receptions, 556 yards and 6 touchdowns are the most he's had since his 2006-2007 season. In his last two games, Heap has recorded two touchdowns in each. (Yes, he's on my fantasy team. Thank you for asking.) He's obviously been a big threat and definitely someone that Flacco is comforting throwing to in basically any situation. 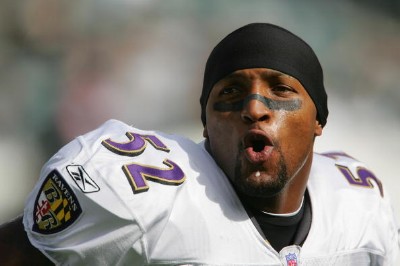 The man is still the best at what he does. [via blogs.dallasobserver.com]

The heart and soul of this defense is still Ray Lewis. That goes without saying, but I said it anyway. To the New York Jets went middle linebacker Bart Scott and defensive coordinator Rex Ryan. It doesn't matter. Outside linebacker Terrell Suggs and free safety Ed Reed have missed a combined seven games with injuries. It doesn't matter. Still no-name players Chris Carr (excluding these parts) and Tavares Gooden are starting. It doesn't matter. This 3-4 defense is still elite thanks to a great coaching staff, Pro Bowl nose tackle Haloti Ngata and oh yeah, that guy that wears the number 52. Defensive coordinator Greg Mattison deserves a lot of credit along with John Harbaugh.

Conclusion: Gulp. Everyone likes to finish the season strong. After a poor start, the Raiders can finish the season 4-3 in their last seven games with a win; however, the task will be anything but easy. Keep in mind that the Ravens, who need a win to secure a playoff spot, will be giving it their all. There is some hope for us since we have beaten the Eagles, Bengals, Steelers and Broncos. The game plan is what is usually is. Running the ball goes without saying. If we want to be able to pull off the upset, we must use Michael Bush and Darren McFadden -- or at least one of the two -- effectively to take the pressure off of Charlie Frye. Defensively, don't let Ray Rice go off. If he has a great game, it's over. I'd rather force the young Joe Flacco to beat us. This is easier said than done, of course.

Feel free to leave your predictions or even your own thoughts and ideas about the Baltimore Ravens and how we can inadvertently knock them out of the playoffs.

Have a happy new year and be safe ringing it in, guys. May the year 2010 bring you happiness.