Share All sharing options for: Previewing the Enemy: Washington Redskins 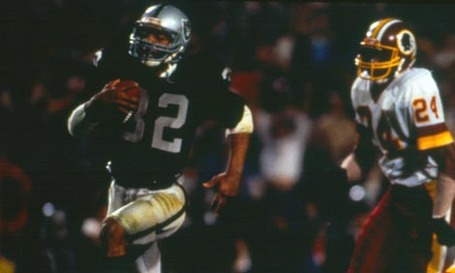 It's a Super Bowl XVIII rematch! [via prod.static.raiders.clubs.nfl.com]

Alright, it's not quite a rematch from Super Bowl XVIII when the Raiders smashed the Redskins en route to their third Super Bowl title in franchise history. Nonetheless, this Sunday, the Oakland Raiders (4-8) will look to put together a winning streak as the Washington Redskins (3-9) will be coming to town. Don't let that 3-9 record fool you. This Washington team is better than their record and it clearly showed after taking Dallas, Philadelphia and New Orleans to the wire. They don't lay down and will play hard. With the team 2-1 with Bruce Gradkowski starting, the Raiders look to come away with another hard-earned victory as they did last week against the Pittsburgh Steelers as 15-point underdogs.

Well, this team is certainly interesting. Sitting at 3-9, this team could easily be 6-6 or even better. We will have to bring our "A" game, of course, if we want to secure a victory on our home field this Sunday. 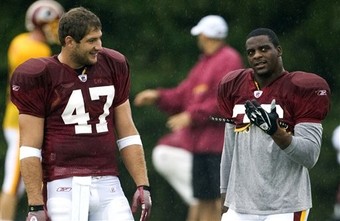 With stars Chris Cooley and Clinton Portis out, others must step up for the Redskins. [via cache.daylife.com]

If you recall, the Redskins offense was the subject of some controversy or what not concerning head coach Jim Zorn. Well, he gave up his play-calling duties to assistant Sherman Lewis. Since then, the offense has performed better. Who is the leader of this Redskins offense? I really don't know to be honest with you. Let's look a little bit into their personnel.

Jason Campbell, QB: Many people questioned Campbell's status as the quarterback this season. He was even benched in favor of veteran Todd Collins earlier. To me, Campbell is actually a pretty solid quarterback. He isn't going to set the world on fire or anything, but he can still hurt you. Campbell is completing 66 percent of his passes this season even if they are "dinks and dunks" most of the time. With 15 turnovers and 15 touchdown passes, Campbell's ratio isn't all that great. He has been sacked three or more times in five games. Obviously, getting some pressure on him would be nice.

Rock Cartwright, HB: Rock is solid, just like a rock. (Ha, get it?) If you want him to be the running back, he can. If you want him to be the fullback, he can. He'll even run back kicks and run down there on punt returns. He is a threat out of the backfield to catch passes. A somewhat physical runner, Cartwright doesn't really stand out in terms of either his speed or his strength. Cartwright has stepped up for the injured Clinton Portis (concussion), who just put on injured reserve. Also on injured reserve is Portis' backup Ladell Betts, so the Redskins are thin at running back.

Quinton Ganther, HB: Ganther, just in his second year out of Utah, is someone I just don't know too much about. Essentially moving up from fourth on the depth chart to splitting time with Cartwright, Ganther was mildly successful against the Saints last Sunday with 46 yards on just 8 carries. The week before that against the Eagles, Ganther had 32 yards on just 5 carries. We may see more of him against the Raiders with him averaging 5.8 yards per carry over the past few weeks.

Santana Moss, WR: The pint-sized and speedy Moss is Washington's leader in receptions (49), yards (642) and touchdowns (3). He is what you would call the team's go-to-guy, but really the Redskins have a lot of guys they go to. Still, Moss provides that veteran presence and can't be overlooked. Maybe this would be one of the few times where I wouldn't mind Nnamdi Asomugha moving around from receiver to receiver, which he will at least a little bit. 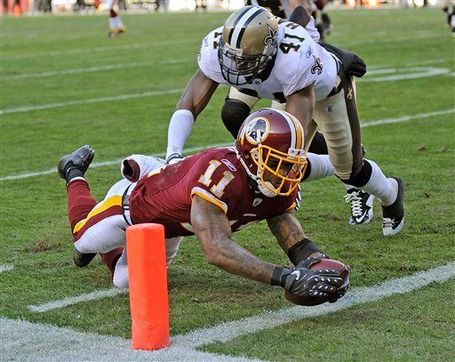 Devin Thomas, WR: The second-year receiver out of Michigan State, Thomas is a young man seemingly improving with each game of late. He has even been prominent in the kick return game of the past two weeks. Still, he has shined brightly in the passing game over the course of those two same weeks. After a decent game against the Eagles, he broke out for 7 receptions, 100 yards and a pair of touchdowns last week against the Saints.

Antwaan Randle El, WR: The ex-Steeler is still in Washington. Randle El, who is very durable having missed only one game in his eight-year career, he is a dependable target for Campbell despite only averaging 3.3 receptions per game. I believe this is more in part to the number of targets the Redskins like to use. The team isn't confined to both Moss and Rande El as you will see here in a minute in this preview.

Fred Davis, TE: After Campbell's favorite target Chris Cooley went down for the year, someone had to step up. Unknown at the time to Washington, it'd be his replacement. Fred Davis. Since October 26, Davis is averaging 7.5 catches and 45.7 yards with finding the end zone three times, including two times in his last three games. As most tight ends are, he is a threat in the red zone and Campbell has no problem looking his way. 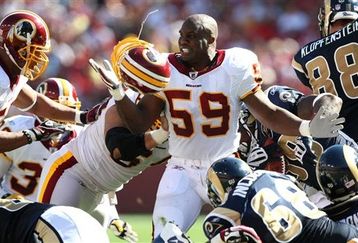 Defensive coordinator Greg Blache and his Washington Redskins actually have a pretty solid group defensively operating out of the 4-3. You may not think so because of their 3-9 record, but I'm sure people don't think highly of our defense since we're just 4-8. Anyway, the Redskins are particularly strong against the pass. Safety Reed Doughty has quietly had a good year and young LaRon Landry is solid at his spot as well. A pretty solid group of cornerbacks are headed by veteran Fred Smoot, who is in his ninth year out of Mississippi State. The leader of the defense is the man in the middle, London Fletcher, who leads the team with 109 tackles. Brian Orakpo, the 13th overall pick in the 2009 draft, plays on the outside along with veteran Rocky McIntosh. Defensive tackle Albert Haynesworth has been in and out of the lineup with injuries this season. He signed a monster contract in the offseason, but the Redskins' defense is only ranked 24th against the rush. His presence is desperately needed for Washington. Haynesworth is listed as questionable as of right now. At right defensive end, Andre Carter has nine sacks and deserves some Pro Bowl recognition for his great play. Again, this is a very solid defense and will do everything it can to keep their offense in this game late on the road.

Conclusion: The thing that sticks out defensively about the Redskins is their 24th-ranked rush defense. With Haynesworth questionable, he probably won't be playing on every down. Justin Fargas, Michael Bush and Darren McFadden should have success as long as head coach Tom Cable keeps giving them the rock. I believe of the first 28 plays against the Steelers, 18 of them were rushes. That is a similar ratio that I hope to see this week considering how strong Washington's pass defense is. Speaking of the pass, the breakout of Louis Murphy was something else, especially with Darrius Heyward-Bey out. It's nice to see someone step up at the receiver spot. Chaz Schilens even found the end zone for the first time in 2009 and Todd Watkins caught a key pass in the final drive. Johnnie Lee Higgins came through for us as well. Wide receivers against Pittsburgh caught 12 balls for 248 yards, both of which I'm sure were season-highs for our club. We're definitely going to need that against the Redskins' formidable pass defense against the previously mentioned Smoot and also Carlos Rogers and ex-Raider DeAngelo Hall. This may be a good test for Bruce Gradkowski as well, even though he did perform well against two really good defenses already in Cincinnati and Pittsburgh. I think we're ready for this.

Feel free to leave your predictions or even your own thoughts and ideas about the Pittsburgh Steelers and how we can earn a win our fourth win of the season on Sunday.