Mario Henderson and the Offensive Line

Share All sharing options for: Mario Henderson and the Offensive Line

The Raiders are still not done and look to address the void left at center from the departure of Jake Grove. The Raiders are still in discussions with former Buffalo center Luke Preston and will probably sign him this week. That would give the Raiders three centers on their roster in Preston, John Wade and Chris Morris, with Preston and Morris also being able to play guard.

The signing of Khalif Barnes to a, "show me what you've got" one year contract, makes the Raiders strategy for the present and long-term future of their offensive line interesting. Erik Pears looks to be the right tackle replacing Cornell Green who will serve as backup. On the surface, Erik Pears, was a starter in Denver, is young, athletic and seemingly could be the starting right tackle for the next several years, especially as he develops under the tutelage of Cable and Jim Michalczik.

Whereas, Khalif Barnes was signed as a left tackle. The contract the Barnes signed dictates that he must prove in 2009 that he is capable of thriving in the Raider ZBS/power blocking system. If for whatveer reason that Pears does not work out at RT, then Barnes is capable of moving there. If Barnes plays well in 2009, then the Raiders can re-sign him before he hits free agency. If Barnes sucks then they just let him walk.

Or, if Mario Henderson continues his tremendous progress and nails down the left tackle position for the next 10 years. 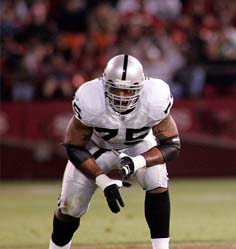 At 6-7, 300 lbs Mario performed better than expected when he was called on to do so. Henderson did not allow any sacks and was not penalized for holding or false starts, something that has killed far too many Raiders drives. Bringing in Barnes adds competition and will keep Henderson motivated as he confirmed yesterday to SFGate.com:

As for Henderson, his confidence is bolstered by the fact the Raiders didn't go out and throw a long-term contract at a left tackle. On his part, Henderson stayed in Alameda when the season ended and has worked out continually at the team facility.

"I just want to be consistent so they can depend on me and not worry about it," Henderson said. "I showed I can do it if given a chance. That's pretty much all I needed, a chance to show them what I can do.

"I just want to come out here and show them I can still do it."

I love the fact that he has been working out at the team facility since the season ended. We should only expect that Mario will continue to improve and that he has not yet reached his potential. Many in this community have insisted that the Raiders need an upgrade at left tackle and should use their first round pick to draft one. I don't share that opinion as I believe that Henderson has already shown that he can play left tackle and through his dedication, will only continue to get better through time.

The Raiders have done well to address their needs and depth this off season along the offensive line, though they may still draft a center and tackle, I do not believe it will be with the No. 7 pick.

What are your thoughts about Mario Henderson and the offensive line?