The Silver & Black Pride 2008 Player Achievement Awards continues its series as we move to part V - Special Teams Player of the Year.

The S&BP Community decided overwhelmingly its choice for the 2008 Offensive Player of the Year with 65% of the vote you chose: Zach Miller.

In the 3 different units of a football team, it can be easily stated the on the 2008 Raiders their Special Teams unit was by far the strength of the team. Certainly, the Raiders 2008 Special Teams kept them in most games, if not outright winning some of them. 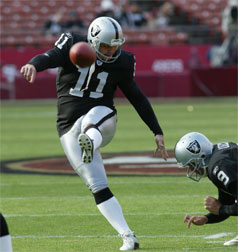 Sebastian Janikowski, better known as SeaBass kicked his way to 97 points, while the entire rest of the Raiders team scored just 228 points. Janikowski's cannon leg allowed him to kick a Raider record 57 yard field goal this season as well as many clutch kicks. While his kickoffs would often eliminate the opposing teams return game as Jano would kick the ball out of the end zone or put such a hang time on the ball that the Raiders coverage unit would be in place to pin the returner deep. 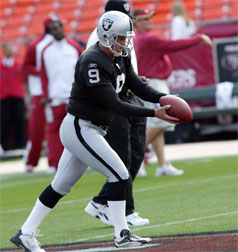 All-Pro Shane Lechler has proven to be a "special" weapon for his team, not just a punter, but someone who effects the game with his incredible skills. Lechler's booming punts, hang time and coffin corner kicks has allowed an amazing 33 of his 90 punts to be downed inside the 20 yard line. Without question, the Raiders Special Teams would not be special with Mr. Lechler. 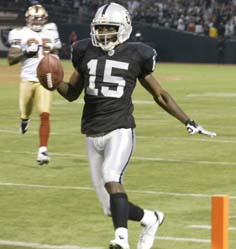 In 2008, JLH started the season handling duties as both kick and punt returner as he and the team looked for his true niche. Johnnie was more tentative as a kick returner and eventually relinquished his role there, but as a punt returner, he took to that role and shined averaging 13 yards a return and 3 touchdowns. JLH is a star in the making and soon teams will have no choice but to punt far away from him.

Justin Miller came to the Raiders in mid-season as a waiver claim after being let go by the Jets. Miller immediately invigorated the kick return game as he was a threat every time he touched the ball. With his unique way of fielding the ball with his two hands over his head, his elite speed, fearlessness and elusiveness, Miller averaged 24.8 yards a return and two touch downs and gave the Raiders an impact player in the return game that they have lacked for years.

Silver & Black Pride Community, it's time to choose your 2008 Special Teams Player of the Year.

Up next: Most Valuable Player