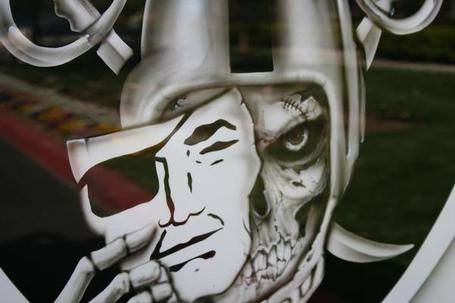 Greetings all, Weekly Raider Issue #7 is here. Today we feature none other than the Raiders QB JaMarcus Russell. You'll also get my thoughts on the upcoming position battle at safety for the Raiders, and of course the featured fan. So kick back, relax, and enjoy some Raiders goodness. 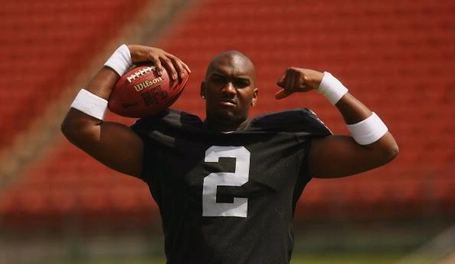 The Raiders 6-6 260 lbs man beast of a QB, JaMarcus Russell will be looking to capitalize on the success of his last two games of the 08 season. But in order to do this, he has fix his greatest weakness, inconsistency.

Russell is like any other QB, he has his good games and he has his bad games, but for him it's either a great game or terrible game. No middle, no median. To me, this season for Russell will be about solidifying a consistency point. Where instead of great game, terrible game, great, terrible, so on and so forth; he'll have good game, okay game, good game, bad game, okay game, great game, good game, etc. I mean just look at his game log last year.

One big reason for this inconsistency is the enormous amount of sacks (31) with as much as 4-6 in one game. However, the O-Line looks much improved thus year. For one, Harris is out and Henderson is in. Harris was terrible guarding Russell's blindside. Whether it was allowing a sack, getting a penalty, or letting the pressure get to Russell, harris was a flat-out failure. But now we have Mario Henderson, who gave up 0 sacks and committed 0 penalties when he was guarding Russell those last couple of good games. There's also Khalif Barnes who should be the starter at right tackle, creating what should be a very solid tackle duo. And with the great guards and centers in the middle, Russell shouldn't have to worry about defensive tackles very often.

He also had some low pass completion and pass attempt numbers. Mainly due to the fact of an abysmal receiving corps which didn't get the proper lineup in until about Week 15. This year we should have the right receivers starting from the get-go with Schilens and Higgins coming off great finishes to the season. There's also the new additions of rookies Heyward-Bey and Murphy to give Russell even more downfield and big play threats. Also, I look for Walker to have a good year now that he's back and healthy thanks to surgery on his knee. Then of course there's the receiving talents of Miller and backs like Bush and McFadden will se more play time and more time in the passing game.

My expectations for Russell aren't major since this is still a run heavy team. But I definitely expect a lot of improvement when passing situations come up. Expect around 18 to maybe 20 touchdowns, 7-10 interceptions, 2800 passing yards, and probably about 25 sacks if not fewer.

The battle for the starting safety spots will probably be the fiercest position battle in this year's training camp, and arguably the most important. With the cornerbacks very solid this year, the safeties have to step it up big time to keep that Raiders passing defense in it's usual top-10 spot. So let's look at who competing for the spot.

With Eugene, you get a good cover safety who showed some good tackling late in the year when he started. I doubt this will change and I think he'll be the starting FS because he's the best cover man of the group.

Huff has one more year before solidifying that bust status. I'm far from waht you'd call a Huff fan, but I think he'll get every possible chance to prove himself. However, I don't think it'll be good enough. He's a good cover SS, but a miserable tackler; and as a FS he can do neither. Everyone says it was ryan's scheme, but I don't buy it. Schemes don't affect your ability to tackle. He'll be a good backup SS option

Branch is the picture of what being a Raiders safety means. Branch is fast, so fast he's probably the backup kick returner. He's also a sure tackler, something Oakalnd has lacked at safety since Rod Woodson. I like what he can bring to the table this year, we just have to hope injuries won't be a problem for him, though I doubt they will be. Branch to me should be the starting SS.

Then there's the second round pick, Mike Mitchell. To summarize him, he's Tyvon branch, but a harder hitter. He has that amazing speed that Branch possesses, but man can he lay a wallop. Which could prove to be very useful in the future for popping the ball out of a receiver's hands. To me, Mitchell is a young LaRon Landry. However I think his hammy issues will keep as a backup at the start of the season. Though he may very well be starting alongside Branch later in the season. 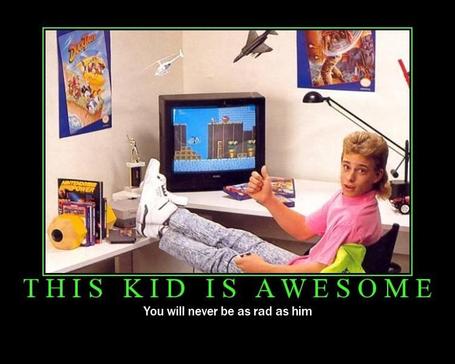