Hello Raiders faithful and welcome to the 5th. issue pf the Weekly Raider. As always, there's plenty of great stuff in here to read. We're only a couple weeks away from training camp so you'll not only get your weekly raider and featured fan, but plenty of my thoughts going into training camp. Hope you enjoy! 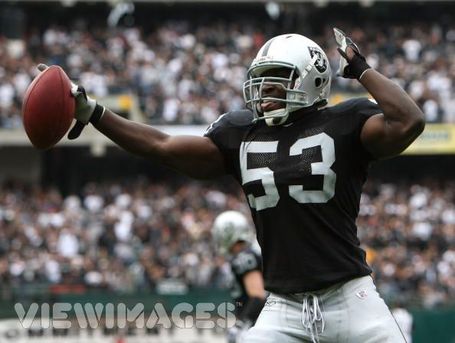 Not too along ago, The Weekly Raider featured the other member the Law Firm, Kirk Morrison. This week, we put the dynamic Thomas Howard under the microscope. And no, i'm not talking about the Duke of Norfolk.

Drafted in 06, Howard would have a fairly good rookie showing with 84 tackles, 4.5 for loss, and 2 passes defended. The Raiders love speed as everyone knows, but this speed prospect showed early on that he was one of, if not the, fastest linebackers in the NFL. Able to shoot through the line to make stops or chase down guys from behind. And that's just in the running game. Howard could cover anything form speed backs, to tight ends, to even receivers. Tell him to cover it, and he'll do so very well.

However, also like Morrison, Howard would slump in 08. With 80 tackles and only 2.5 for loss and only 1 interception. However his pass defense number would still be good with 5 passes defended. Howard was still a force in the passing game to be sure, but it seems that like Nnamdi, he too was avoided. With teams able to throw on the safeties, Hall, and even CJ in the early going, there was no need to risk a pick-six by throwing to #53.

But, I have high hopes for Howard this year. Though the safety spot is still very iffy this year, Chris Johnson has become a dangerous cornerback, so some attention may be taken away for the Law Firm of Howard and Morrison (I'm still waiting for the cop show). It also appears that Alston may be getting the SLB spot, which would add yet another force in the pass defense to the linebackers. Howard still needs to work on his run stopping and I look forward to see if he'll get to use that speed to blitz this year. Which I fail to see why he wouldn't.

My expectations for Howard, continue to expect tackle numbers in the 80's, but I see at least 6 for loss this year. Though I don't think he'll have another 6 interception season, I believe 4 interceptions seems about right for him and I think you'll see one turn into a pick-six. I look forward to see what Howard will bring to the table this year as arguably our best playmaker on defense.

Training camp is almost here and I couldn't be any more excited. Look for a lot of competition this year. Whether it be a minor competition of third string QB, or one as major as the starting running back or starting strongside linebacker. To me there's a only a few guaranteed starting spots.

Everything else is wide-open. Who knows how well O'Neal will play coming back this year (if he even does, whih he should), will Alston keep playing at his OTA level, who going to start at what offensive tackle spots, and many more questions. The top three things I'm going to be watching in training camp: the backup tight end battle, the starting strongside linebacker battle, and the battle for the starting safeties. The reason that the wide receiver competition wasn't on my list is because I know that two of four people will start this year. Any combination of Schilens, Higgins, Walker, and Murphy.

Wait? The rookie Louis Murphy? Indeed. Cable has credited him as the best rookie among the entire group. And I don't blame him. The same speed as DHB, better hands from what I've read, and most importantly, no major hammy issues. If DHB wants a shot to even be our #3 receiver, he has to get his hamstrings to stop giving him troubles. Only then can he get his hands to the level of Murphy's. I'm hoping he went to Russell's passing camp, because he has a lot of work to do.

My predicted roster/depth chart by the end of training camp ( / are used to separate first, second, and third string) :

DE's (I'm not good with right and left): Ellis/Richardson/Scott/Burgess or Gunheim

SS: Huff/Mitchell (yes I think Huff will see a chance to start early on)

So what are your thoughts on training camp? 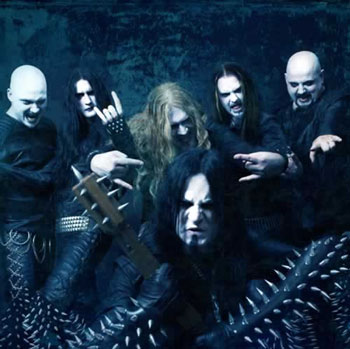 Author's Note: For those who don't know, this is the Norwegian Melodic Black Metal band Dimmu Borgir. Dimmu Borgir is Norwegian for Dark Fortress or Dark City. They're one of my favorite bands.