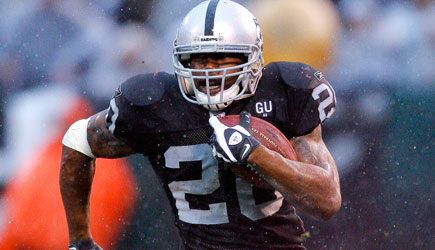 What's at stake: It's a preseason game, so nothing as far as the standings are concerned, but for the 27 players which are on the active roster now that are vying for a spot on the final 53, much is at stake. Since the first roster cutdown to 75 players is not until September 1st, this game will be all about what is new and what has changed with our Oakland Raiders.

What to look for: Coach Cable has stated that the Raiders starters will play for one quarter in this first game. With that in mind, we should look for how the new regime of defensive coaches, led by Defensive Coordinator John Marshall, have implemented their attention to fundamentals. Dallas will bring its own vaunted running game with Marion Barber and Felix Jones and it will be the first look at how the Raiders DT's face the Dallas line and those backs. Marshall has emphasized discipline, but apparently Tommy Kelly hasn't received the memo, at least based on the reports from practice having Kelly jump off sides more often than the entire rest of the defensive unit. We will start seeing if Kelly is going to be part of the problem or part of the solution. Burgess is gone, there are new and improved DE's in the mix and  Marshall likes using his linebackers to blitz, let's see if some pressure can be brought to Romo. And of course, the rookies to watch: Matt Shaugnessy, Slade Norris, David Nixon, Jerome Boyd and Desmond Bryant will all get the chance to prove their value to the team.

On offense, it will all start with JaMarcus Russell, as we will see if with another offseason under his belt, heavily emphasized on learning the fundamentals of the game from new QB coach, Paul Hackett, if Russell can bring this game action. We should be looking for improvements in footwork, ball handling, read and accuracy from Russell. With Garcia out, the competition will really be for the 3rd spot between Gradkowski and Frye. We will start to see how the Raiders will deploy the running back rotation of Fargas, McFadden and Bush as well as the impact of Lorenzo Neal in the lineup. Lastly, coach Cable states that rookie Darrius Heyward-Bey will not start but will play a lot in this game. DHB and Louis Murphy should have an impact on the overall offense of the Raiders and we will get our first look tonight.

To get a preview of the Dallas Cowboys new players added and departed go here.

To read what the Cowboys fans have to say about their team and this game go to Blogging The Boys.

Alright Raider Nation! The wait is finally over and the best time of the whole year is about to start....RAIDERS FOOTBALL!