Working Toward The 53-Man Roster: The Offensive Line

Share All sharing options for: Working Toward The 53-Man Roster: The Offensive Line

In our last episode of "Working Toward the 53-Man Roster" we discussed the defensive line. Today we'll discuss the big guys on the other side of the ball, the offensive line. Make the jump to read the article.

When Lane Kiffin was made the head coach prior to the 2007 season, he brought along with him offensive line coach Tom Cable, who had previously been coaching for the Atlanta Falcons. Cable intended to install a zone-blocking scheme, something Raiders fans had all been familiar with as we had watched the Denver Broncos run all over the Raiders in previous years with a similar scheme (the Raiders aren’t nearly as dirty as those Broncos lineman were though, my goodness).

Cable’s zone-blocking scheme, along with a few personnel changes – particularly ’s move from tackle to guard, transformed the Oakland Raiders into a running powerhouse. However, even though the Raiders have been a top 10 rushing team the past two years Cable’s tutelage, pass protection has still been an issue.

Last season the Raiders kept 10 offensive lineman on their 53-man roster. I see the Raiders keeping 9-10 on this year’s roster, depending on how many wide receivers, defensive lineman, or linebackers they are intent on keeping. Here is a breakdown of the depth chart by position. 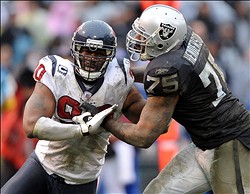 Mario Henderson was drafted in the 3rd round of the 2007 NFL Draft out of . Only a one year starter in college, Henderson was a raw talent that needed a lot of work before being ready to play at the NFL level. was obviously an Al Davis pick, because Lane Kiffin was eating his hat trying to explain the pick and took every opportunity he had to pan ’s future in the NFL. Through two years of learning the position and finally getting an opportunity to play last season, made the most of his opportunity. After making a few spot starts for the injured Kwame Harris, later took over left tackle for Harris in Week 15. In 3 games did not give up a sack nor took a penalty, two things that can be directly attributed to the Raiders winning their last two games of the 2008 season.

now has the starting left tackle position locked up for the foreseeable future. We can only hope ’s success the last 3 weeks of 2008 will carry over and give JaMarcus Russell those precious few seconds more to throw the ball and get the passing offense on track in 2009. 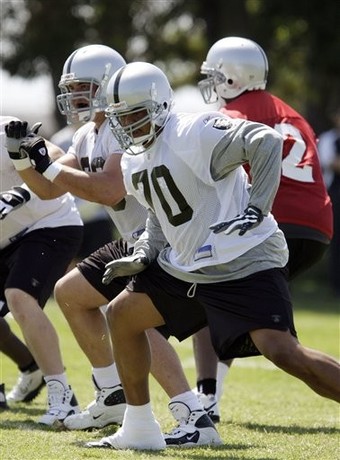 In the offseason the Raiders signed free agent Khalif Barnes to compete with for the left tackle position. A second round pick in the 2005 NFL Draft, Barnes had spent the first four years of his career with the Jacksonville Jaguars, starting in 57 of 60 games for the Jags with varying degrees of success. Barnes can struggle with pass protection at times, but as a run blocker there are few offensive tackles better. As evidence, the Jaguars averaged over 6 yards per carry when running behind Barnes, second best in the league in 2008.

While many Raiders fans hoped Barnes would shift over to right tackle to displace incumbent starter Cornell Green, Barnes was given the opportunity to challenge Mario Henderson for the left tackle job. Barnes also told the media that he had not played right tackle since his college days at the and would not be particularly comfortable making the transition. Unfortunately for Barnes and the Raiders, Barnes suffered a fractured ankle in training camp and is out for 6-8 weeks. Perhaps Barnes can use his rehab time to get more acclimated with right tackle again. If not, Barnes looks to be primary backup for both tackle positions.

Wand is a journeyman left tackle who has played with the Tennessee Titans, Houston Texans, and Oakland Raiders. Wand had been released by the Raiders, but Barnes’ injury brought him back on August 5th. Wand got most of his playing time with the Texans, making 18 starts in 45 games. Wand will need to show significant versatility in practice and the rest of preseason if he wants to earn a spot on the 53-man roster. As it stands now, he’s a long shot. 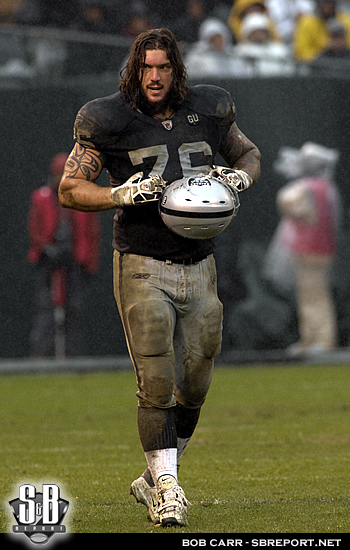 Gallery’s career with the Raiders has been well documented. Drafted #2 overall in the 2004 NFL Draft (over Larry Fitzgerald, Philip Rivers, Sean Taylor, Ben Roethlisburger, etc.) due to his "safe pick" status, Gallery struggled in his first 3 seasons with the Raiders, shifting from right tackle to left tackle, then back to right tackle. Finally, in 2007, Tom Cable stopped the bleeding by moving Gallery to left guard in his zone blocking scheme. Since then Gallery has been an absolute mauler, and should reasonably have been in the Pro Bowl in 2008 had the Raiders strung together a few more wins. Gallery recently had an emergency appendectomy, but once healthy he will once again anchor the Raiders offensive line, and if the Raiders succeed, expect Gallery to make his first Pro Bowl. 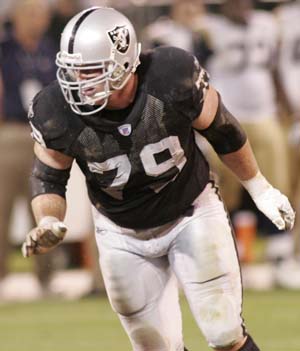 Paul "McNasty" McQuistan, a 3rd round pick in the 2006 Draft, has been a primary backup for the Raiders since being drafted. McQuistan showed signs of being able to hold down the right tackle spot late in 2007 when Cornell Green was injured, but in 2008 Tom Cable and Lane Kiffin stated McQuistan was the primary backup at both LT and LG. When Kwame Harris was injured opening night against , McQuistan went in for him at LT and almost immediately tore his , ending his season. McQuistan is a fair backup, but has yet to live up to his 3rd round draft status. I didn’t catch which side of the ball he played on against , but his versatility should mean he has a roster spot come September. 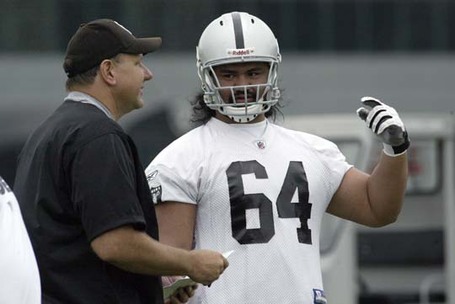 When the Raiders allowed Jake Grove to leave via free agency, many of us assumed the Raiders would address the glaring need through the draft. Instead, the Raiders traded their 6th round draft pick to the Miami Dolphins for Samson Satele, who interestingly enough had just lost his starting job to Jake Grove. The Dolphins were willing to let Satele go because they felt he was not well suited for the Dolphins’ power blocking scheme, and he had struggled against some of the larger nose tackles in the East. The Raiders easily got the better end of the deal though. Satele has been significantly healthier in his young career than Grove ever was, and Satele is perfectly suited for Cable’s zone blocking scheme. Even in this week’s preseason game Satele seemed to hold his own against nose tackle Jay Ratliff. Fantastic deal by the Raiders to bring in Satele. 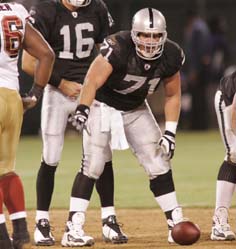 The Raiders signed John Wade prior to the 2008 season to be the primary backup center. Due to injury to Jake Grove, Wade started 4 games for the Raiders and performed admirably, especially in the win against . Lack of versatility is a problem though, as Wade has little experience at either guard position. Chris Morris may push Wade for a roster spot. 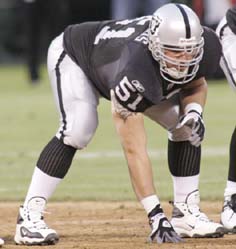 Morris was drafted in the 7th round of the 2006 NFL Draft. Since then, he has played 31 games, making one start at RG vs. last season. Morris’ versatility practically guarantees him a roster spot, as he can play center as well as both guard positions. If Wade and Morris are fighting for one roster spot, Morris should win. 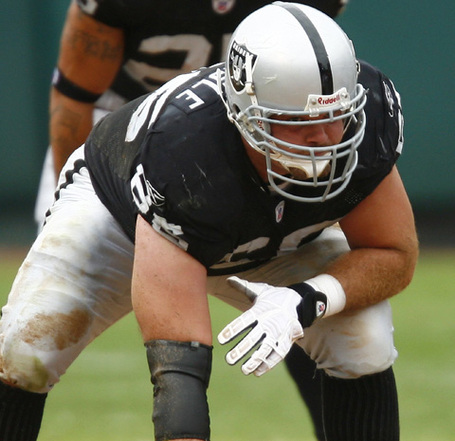 If the Denver Broncos were the kings of the zone blocking scheme earlier this decade, then why not bring in someone who was a part of that? The Raiders signed in 2007, after he had spent 7 years in ’s ZBS. was arguably the Raiders’ best offensive lineman in 2007. Last year however, slipped a bit, particularly with his pass protection. Still, played well enough that the Raiders gave him a new 5-year contract (probably really 2-3 years). is entrenched at the right guard position so long as he’s healthy. 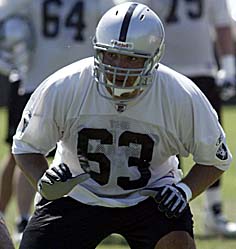 , a alum, was drafted by the Redskins in the 5th round of the 2004 NFL Draft. He played in only two games for the Redskins before being released. He spent 2005 on the Vikings’ practice squad, and then was signed to the Raiders’ practice squad in 2006. was added to the active roster for the last game of 2007. In 2008 was put on injured reserve with a leg injury. can play both guard and tackle on the right side, so his versatility could earn him a spot on the 53-man roster, but there are others with more NFL experience in front of him, particularly Marcus Johnson and Erik Pears.

Johnson was selected by the Vikings in the 2nd round of the 2005 NFL Draft and played both right guard and right tackle for the Vikings, making 18 starts in 47 games. The Raiders signed Johnson as a free agent early in the 2009 offseason. Johnson will need to outplay and Pears for a backup role on the Raiders’ offensive line.

Jonathan Compas is a rookie undrafted free agent from my alma mater UC Davis (Go Aggies!). Like many of the others hoping for a backup role, Compas can play both right guard and right tackle. Still, there are a lot of people in front of him. 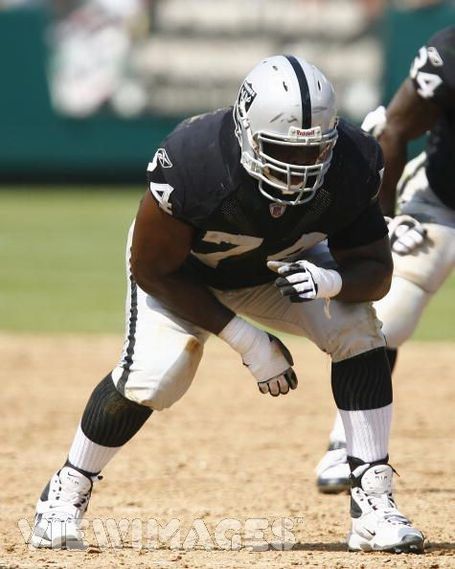 Cornell "Cornbread" Green was originally signed by the Raiders before the 2007 season to be a backup tackle. Somehow, he found his way into the starting lineup and except for the time he was injured, has started every game at right tackle. While Green is above average in run blocking, in 26 starts for the Raiders Green has allowed 14.5 sacks for 86 yards and committed 16 penalties for 90 yards. Green was also arrested for aggravated domestic battery earlier this year, something I thought was going to bring an end to his tenure with the Raiders, but apparently not. Green still has a hold on the starting right tackle job, but preseason will be telling to see if he can protect JaMarcus Russell any better this year.

Like Cooper Carlisle, the Raiders brought in another former Bronco with experience in the zone blocking scheme to compete for a spot on the offensive line. Of all the candidates for backup roles, Pears has the most starting experience, having started 16 games at right tackle and 10 games at left tackle for the Broncos during his tenure there. Unfortunately, reports out of training camp indicated Pears wasn’t distinguishing himself from the other candidates. As stated above, he’ll need to outplay several of these other candidates for a roster spot.

James Marten was drafted by the Dallas Cowboys in the 3rd round of the 2007 NFL Draft and made their 53-man roster but never dressed for a game. He was released after the 2007 season and the Raiders signed him as a free agent. Marten made the 53-man roster last season and dressed for Week 3 against the Bills, but was otherwise inactive. Marten is listed on the Raiders depth chart at right tackle, but played both left tackle and guard at .

Your thoughts on the Raiders' 2009 offensive line S&BP?