Share All sharing options for: Working Toward the 53-Man Roster: QB/Special Teams

Today on, "Working Toward the 53-Man Roster" I give the Raiders quarterbacks and special teams. With the 31st. pass offense last year, Oakland will be looking for Russell to step up his game this year. Lechler will be looking for yet another Pro Bowl year at punter and Jano is going to be itching to boom a 53-yarder. But who will be the Raiders backup QB's? Can Nick Miller unseat Justin Miller at kick returner? My thoughts on these and more, after the jump

As previously stated, the Raiders were a terrible 31st. ranked pass offense. In the previous post I covered the new receiving options, but now we'll take a look at who will be throwing to those receivers. Andrew Walter and Tuiasosopo were cut, and Jeff Garcia, Bruce Gradkowski, and Charlie Frye were added to the mix. The Raiders are only expected to keep 3 quarterbacks (after all we're not Tampa Bay), and with Russell's job secure, who of these three quarterbacks will take the other two spots? 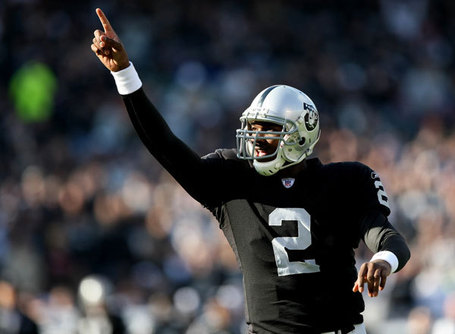 Russell's first full season was anything but great. Russell struggled a lot with his accuracy and mobility in the pocket which lead to a lot of three-and-out's. Though many argue he had a bad receiving corps and bad O-Line. While I agree with those people, Russell does have a lot of work to getting more consistent with his accuracy.

Just when it seemed Russell had a true #1 receiver to work with, Schilens broke a bone in his foot and will most likely be out for a couple games this year. However, Russell still has a lot of targets to work with. But the big thing is that he'll have what appears to be a good O-Line this year. Henderson's building off a stellar showing last year and Satele brings a more athletic option at center than Grove. Though the line still needs to work on its penalty problems.

In camp so far, Russell is still pretty inconsistent, but has been making a lot of good plays. Weaving passes between defenders and lobbing perfect rainbow arc passes. But it seems we can still expect a lot of dumping off to players underneath as Russell continues to struggle with the accuracy of his deep throws. You can expect Cable to keep calling deep pass plays for Russell in preseason to work on his timing on said throws.

I know it was only on one play, but Russell is actually pretty nimble and a quick-decision maker. With everyone covered and McFadden walling off a pass rusher, Russell took off and showed some speed running for 18 yards, avoiding Dallas defenders along the way. If he can make those kinds of good decisions all year long, I'd be very satisfied with JaMarcus this year.

While many have called for Garcia to start, I very highly doubt it'll happen. Cable's already stated that it's Russell's job. Barring injury, I don't see garcia starting a game this year. 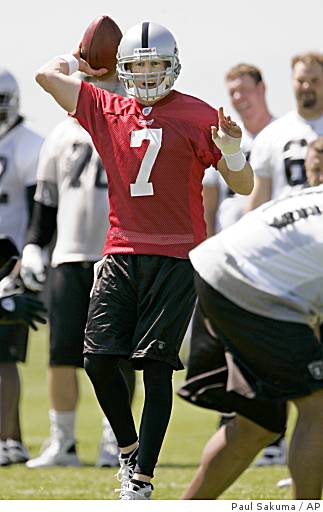 I've been scratching my head on the Jeff Garcia deal since he was signed and I still can't find a way that this a good move. For one, the Raiders are going to be much more of a downfield passing team this year with DHB, Higgins, Murphy, etc. Garcia struggles making those deep throws and is much more of a west coast offense QB. Kinda bad to have your backup not fit your scheme.

Secondly, Garcia was brought in to mentor Russell. Instead, all we've seen is Garcia trying to dethrone Russell as the starting QB. Actually, this was his primary reason for being here.

Thirdly, Garcia makes a lot of questionable decisions. Mainly, he never stays in the pocket. As soon as he gets the ball in his hands, he almost always rolls out of the pocket. The Raiders O-Line looks to actually be able to maintain a pocket this year, but you can probably still expect Garcia to roll out causing more harm than good.

The one good thing I can take from this move, the Raiders will still be doing dumpoffs a lot this year. With Garcia's short and medium range accuracy, it makes him a viable backup in those situations. But Garcia can't just dink-and-dunk with all these deep threats available. Hence why I disagree with a lot of people who believe him to be the one who should be starting for Oakland.

Garcia will most likely be the primary backup because of his great accuracy on short throws and his ability to win games. 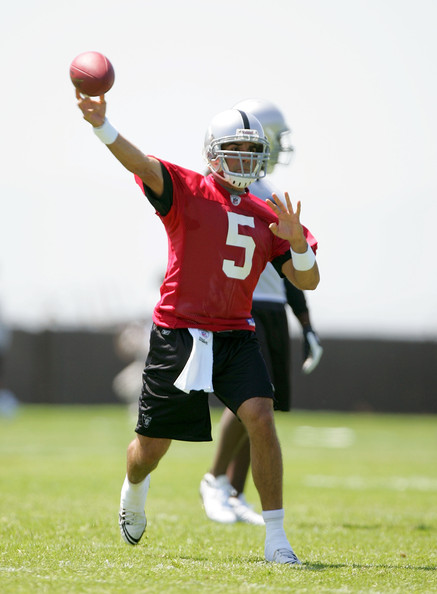 I honestly couldn't tell you much about Gradkowski, but I can tell you he's been making some really good plays in camp. He's also got a better deep ball than Garcia, Gradkowski struggles with his medium range passes.

Gradkowski hasn't exactly had a great career, though when he's had to be a starter for an extended period of time, he hasn't been too shabby. In his rookie 06 year, he completed 177 of his 328 throws for 1661 yards wth 9 touchdowns and 9 interceptions in 13 games. Not exactly great, but not bad for what should be our third-string QB, if not second string.

If Gradkowski has good showings throughout the rest of camp, i have no doubt in my mind that Bruce can take over the backup spot behind Russell. 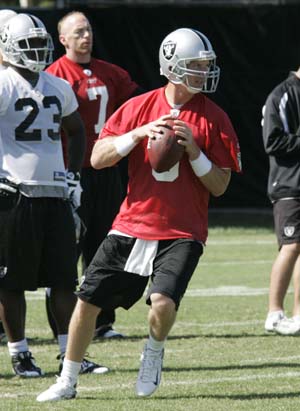 Frye to me is going to be the odd-man out. While he's fairly strong armed, he makes a lot of bad decisions. 25 interceptions in 23 games, several of which he only saw limited time in. He hasn't been very good in camp and is pretty far behind Gradkowski and Garcia. I like Frye, but I doubt he makes the roster.

A bright spot for Oakland last year was it's special teams unit which saw new life after many below average years. The return game was incredible, Lechler was amazing as always, Jano can still kick field goals from 55+ yards out, and special teams ace Ekejiuba was a Pro Bowl alternate. 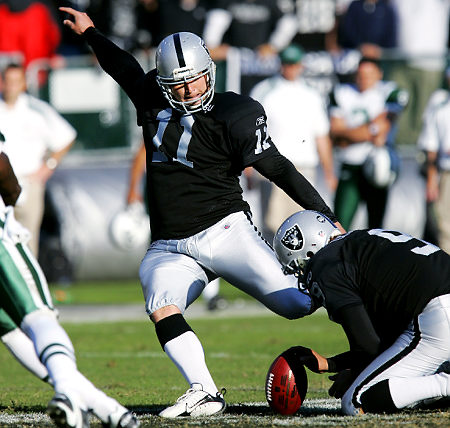 Oakland's record-breaking kicker, Janikowski has the strongest leg in all of football. Easily pounding kicks 55+ yards with ease and booming kickoffs for touchbacks, his only flaw his accuracy. Jano's not horrible, but his kicks often slice too far left or right quite a bit of the time. It's a problem that's not gone away over the years, but he's definitely working on it. If Seabass can refine his accuracy a little bit more, he could be a Pro Bowl kicker. 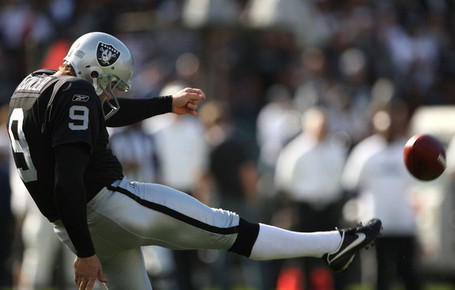 What can be said about Lechler that hasn't already been said? He's basically the greatest punter in raiders history, if not NFL history. He holds the NFL record for best average yards per punt with 46.8 yards per punt. You can expect Lechler to continue going out every Sunday and blasting punts inside the opposing team's 20's like he has year in and year out. 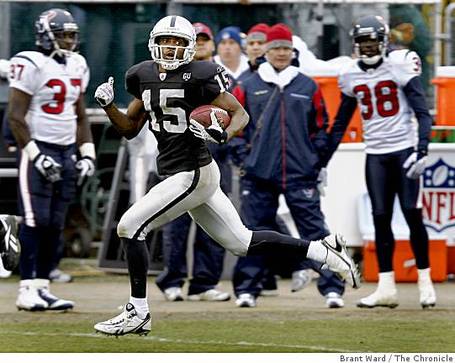 A speedy receiver, a fantastic dancer, and one of the best return threats in the NFL, Johnnie Lee "Blue-Suede Shoes" Higgins does it all. Higgins turned 44 punt returns into 570 yards and an amazing 3 touchdowns. His touchdown returns were a big reason for wins against Denver and Houston last year. I expect Higgins to continue being a game-changing return threat this year as we should see similar numbers from him if he stays healthy. 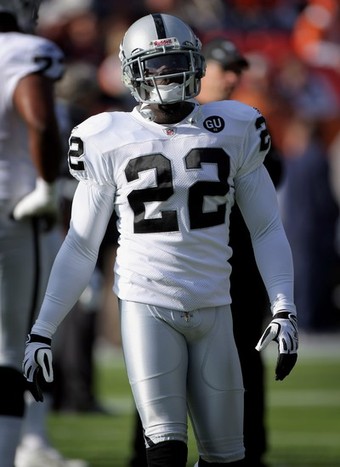 While Justin isn't a great corner, he is a great kick returner that brought new life to Oakland's special teams. Oakland hadn't returned a kickoff for a touchdown in years, Justin Miller did it twice last year. Returning 32 kickoffs for 794 yards and the aforementioned 2 touchdowns, Miller might be being challenged by another Miller. Nick Miller that is. Justin's going to have to prove he's still the top kick return man in Oakland, or face losing his starting spot. Definitely something to keep track of until the regular season starts. But I expect Justin to keep his starting role. 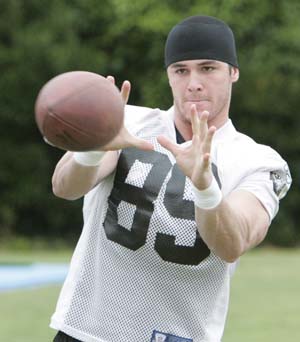 There's some genuine competition here for the job of kick returner. Nick has been getting chances throughout camp and early on in preseason. Nick is definitely as fast as Justin, but does he have the moves that Justin has to create some big plays on kickoffs? If he does, we could see a different Miller returning kicks on Monday Night.