Working Toward The 53-Man Roster: Linebackers

Share All sharing options for: Working Toward The 53-Man Roster: Linebackers

In this installment of Working Toward the 53-Man Roster, we’ll discuss the Raiders linebacker ranks. The Raiders only have 10 linebackers on their 80-man training camp roster, and kept 7 on the 53-man roster last season, so most of the players discussed today will end up making the final roster. The bigger question for the Raiders seems to be which 3 linebackers will make up the starting rotation. Continue reading after the jump.

While the tandem of Morrison and Howard make up one of the best coverage linebacker corps in the NFL, Raiders linebackers take a lot of heat from us fans regarding the run defense. A good deal of that blame, however, has to be placed back on the defensive line for poor gap responsibilities. It’s hard for guys like Morrison and Howard to make tackles when they have to engage an offensive lineman first. Here is a breakdown of the Raiders linebackers based on the unofficial depth chart. 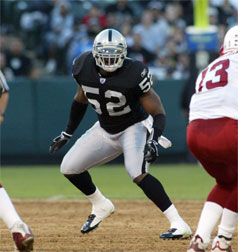 Many of us consider Justin Fargas to be "Mr. Raider", but many would argue that the title should go to Kirk Morrison (or Nnamdi Asomugha). Few NFL players get the opportunity to play for the team they grew up rooting for – so count Morrison as one of the lucky few. Drafted in the 3rd round of the 2005 NFL Draft out of , Morrison was plugged into the starting lineup immediately, playing at strong-side linebacker in 2005. Since then, Morrison has been holding down the position and has not missed a single game due to injury. Morrison is one of the better pass defending middle linebackers in the league, and Morrison has racked up over 100 tackles in each of his first four years, but astute Raider fans have begun to realize that many of Morrison’s tackles come too far away from the line of scrimmage for our liking. Morrison is in the last year of his existing contract and is being pushed by Ricky Brown for playing time at the position.

Morrison dislocated his left elbow during the first defensive stand against the 49ers last weekend, but Coach Cable has stated that Morrison should be ready to go for Opening Night against the Chargers. If for some reason he’s not ready to go, Ricky Brown should start at . 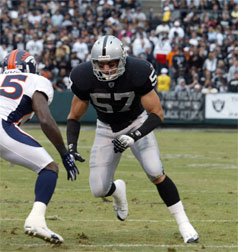 Ricky Brown joined the Raiders as an undrafted rookie free agent in 2006. After training joined the Raiders’ practice squad before being signed to the active roster in Week 4 of the 2006 season. Brown spent most of the 2006 and 2007 seasons on special teams, playing as a LB only toward the end of the 2007 season. In 2008, however, Brown was given an opportunity to unseast Sam Williams at strong-side linebacker, and won the starting job in training camp. Brown played in 7 games, starting 6, before suffering a groin injury and being inactive the remainder of the ’08 season.

A restricted free agent after the ’08 season, the Raiders re-signed Brown to a one year, $1.545M contract, and have been testing his versatility during the offseason. The Raiders have had Brown split time at both the and linebacker positions to see where he is best suited. Coach Cable said it was to create competition at certain positions and to push the incumbent starters, while Coach Marshall indicated the idea was to ensure that there were suitable backups in case of injury. If Morrison’s injured elbow keeps him out of Opening Night, look for Brown to start at middle linebacker for at least the first week. Isaiah Ekejiuba 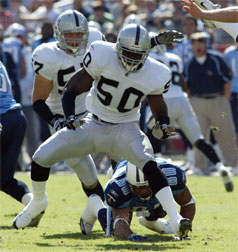 Isaiah "Zeke" Ekejiuba initially entered the NFL as an undrafted rookie free agent with the Arizona Cardinals in 2005. The Cardinals cut Zeke before the regular season, and the Raiders signed him to their practice squad, then signed him to the active roster in Week 8 of the ’05 season. In 4 seasons with the Raiders Ekejiuba has seen very little time at linebacker, but has been a special teams standout, so much so in fact that the Raiders made him one of the highest paid special teamers that don’t kick the ball in the NFL. Ekejiuba has been working hard on his skills as a linebacker, but is still the 3rd string , and is unlikely to see much playing time except as an injury replacement. Ekejiuba is currently suffering from a shoulder stinger injury, and his status for Opening Night is unclear.

With injuries to both Morrison and Ekejiuba, the Raiders needed more depth at middle linebacker for the last two weeks of the preseason. To resolve the issue, the Raiders signed former first round draft pick Napoleon Harris to a contract yesterday. Harris has played in 100 games, making 73 starts, and amassed 281 tackles. He played for the Minnesota Vikings last season at middle linebacker when starter E.J. Henderson suffered an injury. Harris is a long shot to make the final 53-man roster unless he can show some versatility by playing multiple LB positions. 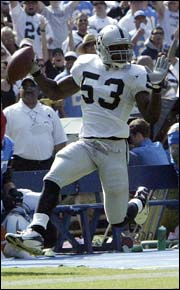 The Raiders drafted Thomas Howard in the 2nd round of the 2006 NFL Draft after his impressive college career at UTEP. Howard stepped into the starting rotation immediately at weak-side linebacker and instantly became a playmaker, collecting 110 tackles in ’06. In 2007 Howard established himself as one of the best cover linebackers in the game, amassing 7 interceptions (2 for TDs). Last year opposing QBs got wise to Howard and seemed to work around him, though he still collected 97 tackles and an interception. Like Morrison, Howard is one of the best cover linebackers in the game, but struggles at time stopping the run. Under new defensive coordinator John Marshall, look for the speedy Howard to blitz more often. 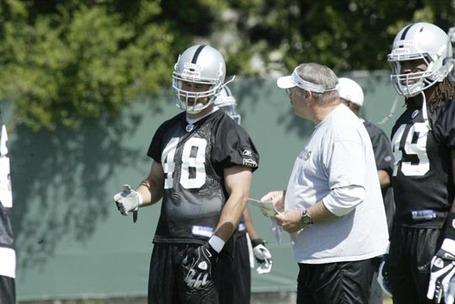 David Nixon is a rookie undrafted free agent from BYU. At 6’3", 225lbs, Nixon is a bit undersized for an NFL linebacker, but what he lacks in size he seems to make up for with speed and tenacity. Still, Nixon is a huge long-shot to make the final roster. 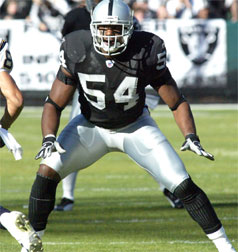 The Raiders drafted Sam Williams in the 3rd round of the 2003 NFL Draft, and ever since has seemed to take the brunt of fans’ anger regarding Al Davis’ drafting habits and "scholarship program." Williams has been injury-prone during his 6 year career, and has generally struggled at strong-side linebacker. Still, Williams make a fairly nice contribution on special teams and actually made strides at last season in limited time, collecting an interception and a fumble recovery. Like every year, Williams seems to be on the roster bubble, but may stick around for one more year, much to the chagrin of the scholarship haters.

The two players discussed above are listed as the primary backups to Thomas Howard at weak-side linebacker. It’s no wonder then that the Raiders felt they needed to go out and bring in a LB with a better skill set for the position and much more experience. The Raiders kicked the tires on both and Derrick Brooks and decided on , signing him last Sunday.

A 3rd round draft pick by in 2001, started at both strong-side and weak-side LB for the Dolphins for 3 years before signing a 5-year deal with the Houston Texans prior to the 2004 season. In 4 years with the Texans Greenwood was able to amass over 100 tackles each season. played both inside linebacker in the 3-4 defense and weak-side linebacker in the 4-3 defense for .

Brown was already discussed in the middle linebacker section. If and when Morrison returns to the lineup, expect Brown to shift back over to starting strong-side linebacker. 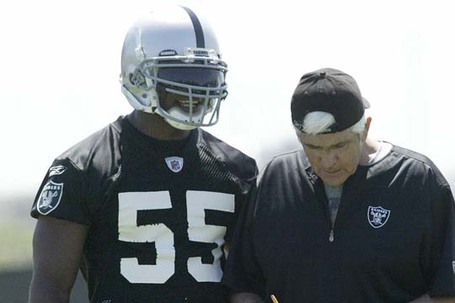 Jon Alston was drafted in the 3rd round of the 2006 NFL Draft by the St. Louis Rams. In 2007 Alston was signed to the Raiders’ practice squad before being signed to the active roster in Week 4 of the ’07 season. Alston played sparingly at OLB in 2007, mostly making his contribution on special teams. In 2008 Alston saw his playing time go up, making 4 starts at OLB as well as becoming a stand-out special teams player. Coming into the 2009 season Alston has put on almost 10 pounds in an effort to win a starting position at strong-side linebacker. That is unlikely to happen, but Alston’s roster spot is safe because he can play both OLB positions and makes a significant contribution on special teams. 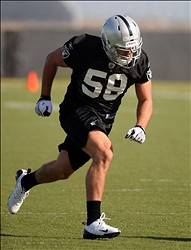 The Raiders drafted Slade Norris in the 4th round of the 2009 NFL Draft out of , where Norris spent time at safety, linebacker, and defensive end. While Norris struggled against the 49ers last weekend, he has generally impressed this preseason and should provide depth at both OLB positions and on special teams.

Your thoughts regarding the Oakland Raiders' linebackers Silver & Black Pride?