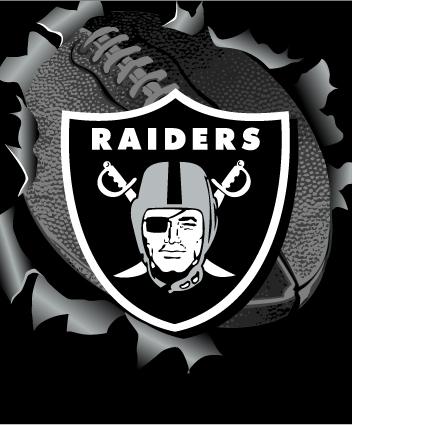 It's that time of week, Tuesday, August 4th. Which can only mean it's time for your weekly raider reading fix, the Weekly Raider. Yet another stirring training camp hopeful's profile, my NFC season predictions, and of course the featured fan. Enjoy! 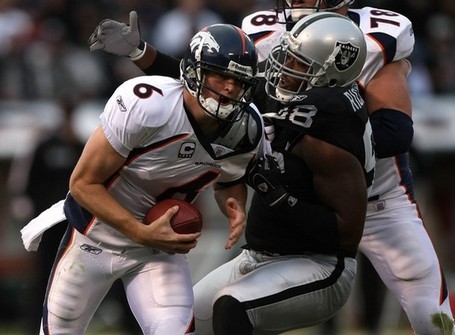 I don't care how much Tom Cable has stated that these early camp lineup isn't necessarily the final depth chart, but Richardson has seen little if any time with the first team, and sometimes hasn't even been with the second team. Instead we've seen DE's Scott and Ellis on the first team as it appears Cable wants to see what he's got in Scott and of course Ellis is probably the best DE we have.

Call me overly cautious, but could the Raiders be moving their two-year starter to the bench? I pray that they aren't. Not only is Richardson my favorite defensive end, but he's also, in my opinion, the closest thing to a base end the Raiders have not named Greg Ellis. Richardson has clearly been the best run stopper of the group, and he's even been developing a solid pass rush getting 3 sacks last year. Good for an end who was drafted to play the run.

The one wild card in determining his role as a starter or just a mere rotation end, how good has Scott gotten in the course of one offseason. If he's pushing our run stopping specialist to the second team in training camp, my guess is pretty darn good. However, I have a hard time visualizing a once rookie nickel end turning into a starting base end in one year. But maybe it's in Oakland's plans.

Hear me out on this, we all know Oakland doesn't blitz. Even if we're amazing at in camp, the Raiders don't blitz. Does this mean that Oakland is looking to get an elite pass rush from their front-four to compensate for the lack of blitzing, even at the cost of run defense on the D-Line? Sounds crazy, but is it? Look at the roster, even with Burgess pretty much guaranteed to be out of Oakland, the Raiders have Ellis, Scott, and Gunheim, three pass rush ends (Ellis is more of a base end but the pass rush is is specialty) and then there's the enigma of Shaughnessy, who I've heard can be a pass rusher in the NFL. But take Shaugnessy out of the equation and we have three pass rush ends, and Richardson not seeing much time even with the second team. I realize this is a crazy theory, but I'm just spit balling.

In my opinion, Richardson has to do something to catch Cable's eye, and get Cable to give him more action in camp. I think Richardson and Scott are our future defensive end tandem, but unless Richardson does something to put himself ahead of Scott and hold off the project defensive end Gunehim, Jay's playing time might suffer.

Author's note: To clarify, Richardson's job is safe barring the unforeseen hand of fate. And this may be all for nothing with Cable just seeing what the other ends can do. Once again, I'm basically spit balling

Last issue I gave you my predictions for the AFC teams' seasons. Now I present my NFC predictions.

1. Giants (12-4)- They get back Umenyiora to an already amazing pass rush. A top-5 defense in my opinion. Amazing running game and the best O-Line in the NFL in my opinion. The only weakness is a young and inexperienced receiving corps.

2. Eagles (10-6) WC- The NFC East is all about pressure, and the Eagles are no different. Amazing blitz patterns, a great D-Line, and one of the finest secondaries in football gives Philly a top-10 D. McNabb has plenty of weapons this year and maybe even a running game with McCoy taking some pressure off the wily veteran Westbrook.

3. Redskins (8-8)- Portis is getting old but still appears to be a good back in the league. Plenty of receiver options for Campbell, who's on the hot seat this year with Washington having been in the hunt for Cutler. An already top-10 D just got better with the additions of Haynesworth and Orakpo plus another year of development for a very young unit. if the offense was more competent, this could be a very dangerous team.

4. Cowboys (7-9)- Missing the playoffs last year, the Cowboys failed to improve at all. Great O-Line, great running backs, poor receiver talent behind Roy Williams and Witten for a struggling QB in Romo. Yet another great defense with some very young talent in a tough NFC East, but it's not good enough to win games for this weakening offense. In a division that's only getting better, the Cowboys are getting worse.

1. Vikings (12-4)- Despite the bad QB situation, the Vikings have the formula for a Super Bowl football team. Arguably the best running game in football, dangerous receivers, great O-Line, top-10 defense and one that absolutely demolishes the run; the only flaw is a questionable secondary and poor QB play.

2. Bears (9-7)- Does Cutler make this a winning team, in my opinion, yes. Though the receiving corps is weak at best, Olsen and Clark are an amazing TE combo. Forte, Jones, and the other Adrian Peterson form a very tough running game to run behind a great run blocking O-Line. Though the defense is slowing down, it's still the Bears biggest strength. Great d-Line, top-5 linebacker unit, and a physical secondary creates a nightmare scenario for any opposing offenses. Next year, with hopefully new receivers, the Bears could be back as a serious threat.

3. Packers (7-9)- Forgive me for not being a buyer of this team, but I don't see the big deal. A weak O-Line that saw no real improvement, a major scheme change on defense which puts a top-10 defensive end in Kampman at oLB for the first time in his career, and an aging secondary makes me very skeptical of a team in a young and physical division. They'll have a very hard time against teams like Minnesota and Chicago. But Rodgers proved he a great QB, Grant is still a top-notch back, and the receiving and linebacker corps are outstanding.

4. Lions (3-13)- What sticks out to me about Detroit's offseason not named Stafford, a top-10 linebacking corps, and a once top-10 receiving corps reduced to Calvin Johnson and the wash-out vets of the NFL. This offense actually took a step backwards in my opinion. The receiving corps is basically made up of Calvin Johnson and Dennis Northcutt. The last being an inept receiver for his former team. Culpepper and Stafford will have limited weapons outside of rookie TE Ingram and Johnson. Though Kevin Smith looks to be one of the up-and-coming backs of the league. The defense still sucks outside of that elite group of linebackers, and the O-Line is still abysmal.

1. Panthers (12-4)- Noticing the trend of 12-4 division winners? This is a weakining division with a once playoff contender in Tampa now no more, New Orleans not getting noticeably better, where Atlanta is the only real threat. Carolina has a very tough D, but the offense is the real story. Though Delhomme throws a lot of INT's, Smith and Muhammed make up a very good receiving duo to go along with the top-5 running back duo of Williams and Stewart. Don't forget about that talented O-Line with Otah and Gross making a great tackle tandem.

2. Falcons (10-6) WC- Atlanta is now officially one of the best offenses in football. Top-5 running gane, the best TE in football, top-10 receiver in Roddy White, and top-5 running back in Turner. This is without mentioning franchise QB Ryan and speedster running back Jerious Norwood. And all with a young and talented O-Line. The one problem with Atlanta, that defense is terrible outside of John Abraham at defensive end. That defense keeps them out of the Super Bowl. Look for a lot of additions on that side of the ball next offseason.

3. Saints (6-10)- Call me what you may, but I think the Saints will be taking a big step back this year. Great passing game, but Bush can't run the ball as well as he should and Pierre Thomas is average at best. The defense is horrid in the running game and the passing game. And you can't tell me that bringing in aging veteran washouts will make this defense any better. As long as teams hone in n that passing game, the Saints will be struggling big time this year.

4. Buccaneers (4-12)- Where the defense fades away, the offense begins to rise in Tampa. Freeman will have plenty of weapons to work with in Winslow, Bryant, and running backs Derrick Ward and Earnest Graham. All this behind a very young and very good O-Line which specializes in pass blocking. The defense still has a decent secondary, but outside of Barrett Ruud and Greg White, the front seven is terrible. Look for teams to devastate Tampa with their running games. And with two potentially top-5 running games in the division, this team is in big trouble.

1. Cardinals (10-6)- Until Seattles' O-Line, and running game even out this amazing passing game and potentially good running game, Arizona is top dog in the division. The Cards defense is also no laughing matter. Littered with great players like Berry, Dockett, Wilson, and Dansby, young talents like Hayes and Rodgers-Cromartie are just icing on the cake.

2. Seahawks (8-8)- Injuries kept the Seahawks from winning the division three times in a row. but a healthy Seattle team is a very dangerous team. Hasselbeck is still a good QB, Houshmandzadeh makes an already good receiving corps great, and that defense is loaded with players like Hill, Tatupu, Kerney, and Trufant mixed in with young talent. The O-line and the running game are still very questionable, but Seattle is back to being a good team.

3. 49ers (7-9)- No significant improvements to the team. QB situation is still abysmal, the O-Line is still weak, the receiving corps is still questionable, the running game is still good, the defense is still good. No real difference from 08 to 09 in my eyes.

4. Rams (5-11)- St. Louis is definitely getting much better. A once weak O-Line is now possibly one of the better in the league. The defense is young but talented. Plus they still have Steven Jackson who's still a top-10 running back despite very bad O-Line play in years past. I can guarantee Jackson will have a great year this year. The receiving corps lost it's two legends in Holt and Bruce, and is now young and thin on depth. Not good for an ever-struggling Marc Bulger. Weak receiving corps and youth on defense really holds this team back.

Next week you'll get my AFC playoff bracket and playoff predictions. 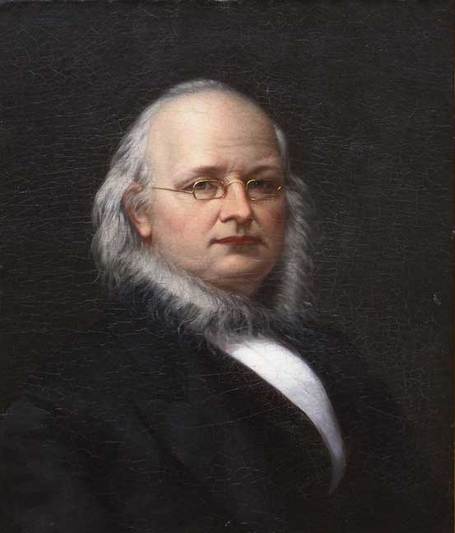