Working Toward The 53-Man Roster: The Defensive Line

Share All sharing options for: Working Toward The 53-Man Roster: The Defensive Line

With the first preseason game quickly approaching, the battle between 80 men vying for 53 spots on the Oakland Raiders final roster is intensifying. While many of the 53 spots are nearly guaranteed to our feature players, certain positions such as wide receiver, offensive line, defensive line, and secondary still have a few roster spots that are up for grabs with several players making their case for the spot on the roster during training camp and the preseason games. Over the next month leading up to the season opener we’ll discuss position groups and who we’d like to see make the 53-man roster in those position groups.

The defensive end position has gone through a good bit of turnover from last season. Both of the starters at DE in the second half of the season, Derrick Burgess and Kalimba Edwards, are no longer with the team. 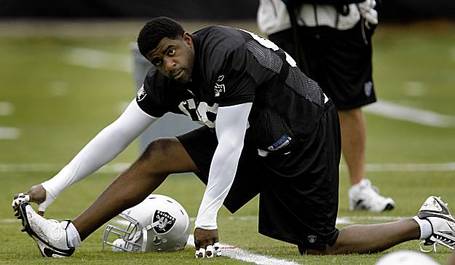 For those of you who may be unfamiliar with Greg Ellis, he was drafted 8th overall in the 1998 NFL Draft by the Dallas Cowboys (much to the chagrin of Randy Moss). In 2006 Ellis suffered a season-ending torn Achilles tendon. Through vigorous rehabilitation Ellis came back in Week 4 of the 2007, and in 13 games racked up 12.5 sacks on his way to both the Comeback Player of the Year Award and his first Pro Bowl appearance. Ellis’ playing time decreased with the addition of DeMarcus Ware and Anthony Spencer to the Cowboys, along with the transition from a base 4-3 to a base 3-4. While listed at 265 pounds, Ellis’ playing weight is probably closer to 280 pounds, and he was not able to make the transition to OLB. As a result, despite starting all 16 games and tallying 8 sacks in 2008, the Cowboys decided to release Ellis in favor of Ware and Spencer (Ellis’ request for a contract extension assisted in his departure as well).

Ellis has been penciled in to replace Burgess at left defensive end. Like Burgess, Ellis’ run stopping at the left end may be a bit of a question mark, but he’s a bit bigger than Burgess so it may be an improvement. Ellis should also be able to provide nearly the same pass rush as Burgess. So long as he can stay healthy, I think we will all be pleased with Greg Ellis at left defensive end. 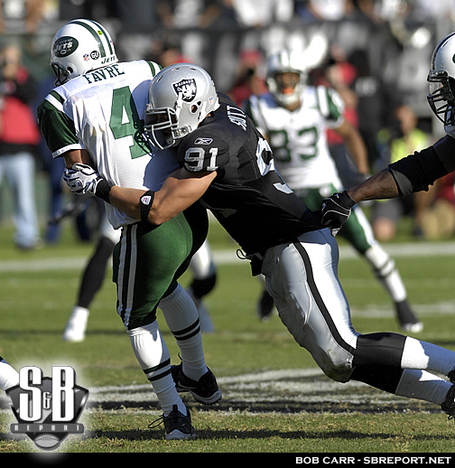 By now we all know the story of Trevor Scott. The product was converted from tight end to defensive end in the middle of his college career and made the most of it. In just two seasons at DE in college, Scott racked up 19 sacks. As a rookie last season, Scott got work as a situational pass rusher and recorded 5 sacks, with his best performance coming against Brett Favre and the New York Jets.

In the offseason Scott worked diligently on his strength and conditioning as well as his technique in order to crack the starting lineup for the defensive line, and for now it appears that his efforts are being rewarded. Scott is penciled in as the starting right defensive end. This will be a position to take note of during preseason to determine whether Scott can wreak havoc on opposing QBs as well as be stout at the point of attack against the run. If he is unable to hold his own against the run, the Raiders will need to look to Richardson or Shaughnessy as a base end and continue to use Scott as a nickel pass-rushing specialist. 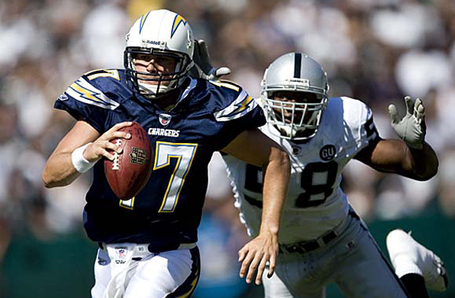 The Raiders drafted Jay Richardson in the 5th round of the 2007 NFL Draft. He proceeded to beat out 3rd round pick Quentin Moses for a spot on the 53 man roster, and played in rotation in 2007. In 2008 was penciled in as the starter at right defensive end. didn’t get a lot of opportunities to play at that position however, as he shifted to left defensive end when Derrick Burgess suffered a triceps injury and missed six games. Working in rotation with Burgess and Trevor Scott, managed 3 sacks, including a safety sack on ’s Chad Pennington.

With Greg Ellis entrenched at left defensive end, Richardson and Scott are fighting for the starting role at right defensive end. Scott has the upper hand with his superior pass rush abilities. Furthermore, recently informed the media that he is still recovering from offseason knee surgery. So long as Scott proves he can handle himself against the run I expect to come off the bench to spell Ellis at left defensive end. 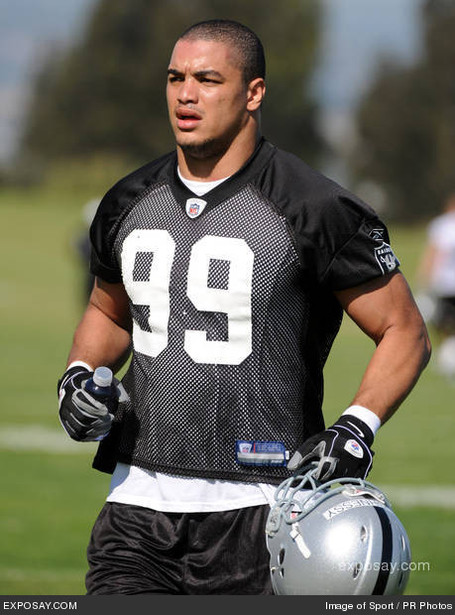 Much as the media labeled Darrius Heyward-Bey and Mike Mitchell as "reaches" in the draft, I actually labeled Shaughnessy as our biggest reach of our draft class. After reading some of the scouting reports on him I calmed down a little bit though. Every indication is that Shaughnessy is a high-motor guy who may not be the most talented but will work extremely hard to get the job done. Like , Shaughnessy is a more of a base defensive end, so it will be interesting to see if he can provide some pass rush. If he can and plays against the run better than Scott, he may actually find himself as the starter at right defensive end. If Shaughnessy gets outplayed by Gunheim or Gray he could be waived, but the Raiders cannot make a habit out of drafting 3rd round players that cannot crack the 53 man roster. 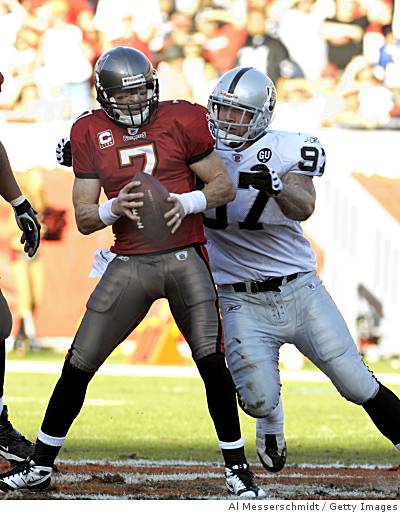 Gunheim signed as an UDFA last preseason and showed enough promise to earn a spot on the Raiders practice squad before getting signed to the active roster in November. His claim to fame is the sack of Jeff Garcia that ended the 2008 season with a win against . I’ve heard significantly less about Gunheim during this year’s training camp than I did last season, and Gunheim only has more people in front of him now. I consider him a long shot to make the squad this season. 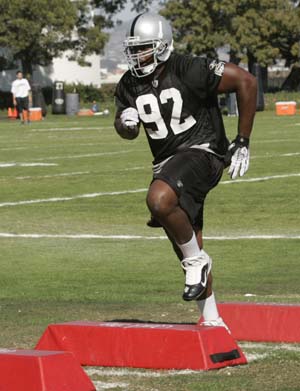 Like Gunheim, Gray signed as an UDFA in 2008 and spent the year on the Raiders practice squad. Again, he’s got a lot of people in front of him, and we haven’t heard enough about his play in training camp to think he’s going to make the 53 man squad.

The defensive tackles for the Raiders take a lot of grief from the Raider Nation, some of it deserved and some probably not. We all understand that they are a talented group, but inconsistency seems to follow them wherever they go. Unlike the defensive ends, the group at defensive tackle is fairly set, with likely only one roster change from last year. 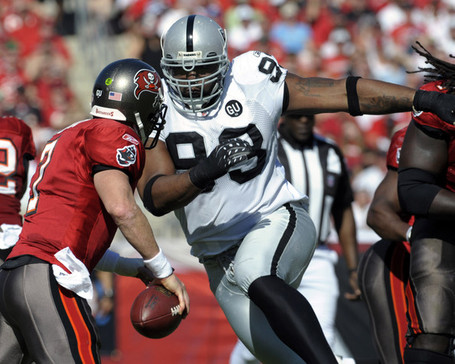 Kelly joined the Raiders as an undrafted free agent in 2004. By 2008, he was one of the highest paid defensive tackles in the game, despite inconsistent play. Kelly has Ed Jasper and Warren Sapp to thank for his enormous contract, as both had high praise for him as a 3-technique defensive tackle. We all understand that Kelly may not be the best UT in the game, but he was the best UT in the 2008 free agent class and we absolutely needed to keep him around, so Al Davis did what he had to. Kelly had a fair 2008, collecting 4.5 sacks and 55 tackles. His presence in games varied from average to unstoppable. Raider Nation hopes to see more of the latter in 2009. Kelly once again will be the starting under-tackle on the defensive line. 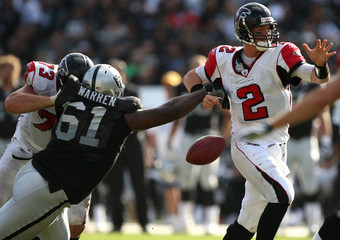 The Raiders made a rare trade with the Denver Broncos for Gerard "Big Money" before the 2007 season. Much like Kelly, is exceedingly talented, but is very inconsistent in his play, and goes from being mediocre at times to being absolutely dominant at others. has the starting nose tackle job locked up though, so we can only hope for more consistency in his play in 2009. 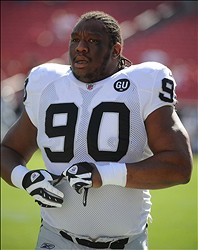 Terdell Sands – you either love him or hate him. Most fans expect a man with such an impressive stature to simply man-handle his opponent and win all individual battles. Unfortunately, Sands’ inconsistent play displays that he gets just as good as he gives at times. Part of our displeasure with Sands is his hefty contract that he simply hasn’t lived up to yet. Many fans call for him to be cut from the team, especially after allegedly punching Pro Bowl punter Shane Lechler in the face. Still, Sands is the closest thing to a true nose tackle the Raiders have, and he does flash dominance at times (see last year’s game vs. where he sacked Philip Rivers twice in dramatic fashion).

Reports indicate that Sands has reported to camp in significantly better shape than in previous years. Also, an interesting article including an interview with Sands surfaced earlier this offseason which indicated that Sands understood he needed to step his game up this year. Sands has a roster spot locked up, and we can only hope he can do more to stuff the line of scrimmage in the run game and demand double coverage in passing situations. 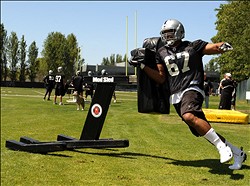 Desmond Bryant is my official dark horse candidate for the final roster spot designated for the defensive line. The Raiders love versatility from their backups, and at 6’5", 290 lbs with sub-5 second speed, Bryant has the size and speed to be useful both as a UT and as a DE. Many have questioned his meager numbers playing for Harvard in Ivy League football, but one article I read stated that Bryant was consistently double and even triple-teamed by opposing offensive lines. One training camp report I read stated that Bryant was man-handling Paul McQuistan in drills, and may be impressing coaches Marshall and Board. I’ll be very interested to see how much time Bryant gets during the preseason to prove he can play at the NFL level. 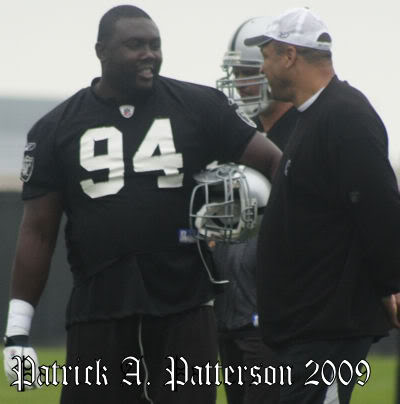 The Raiders do love to collect former first round draft picks. Joseph was drafted by the New York Giants in 2003 and spent 5 years with them before signing with the Raiders before the 2008 season. Joseph did not make the 53 man roster initially last season, but was finally added to the roster in early November once the Raiders finally realized that they could not go through games with only 3 defensive tackles on the active roster. All indications are that Joseph is a fine athlete but is a perennial underachiever. I would not be too surprised if Joseph ended up as the Raiders 4th defensive tackle, but I would prefer the more versatile Bryant to make the team over Joseph. The upcoming month will determine the winner of this roster battle.

The Raiders signed Boschetti as a free agent this offseason. He had previously been on the Redskins’ practice squad, and Coach Cable touted Boschetti’s work ethic and high motor as a motivating force for the rest of the defensive line. Cable also stated that Boschetti was getting work at both DT and DE, showing the versatility required for a backup. Unfortunately, Boschetti’s only mention from training camp reports was when Darren McFadden knocked him on his ass during a pass protection drill. If the Raiders are looking for versatility they should look to Bryant rather than Boschetti. Don’t expect him to make the 53 man roster.

So Silver and Black Pride Nation, what are your thoughts on the Raiders’ 2009 defensive line lineup?