I didn't pick a single one of you guys to advance, but congratulations! [via l.yimg.com]

The NFL playoffs are unlike any other system in professional playoff sports. In other sports, there are best-of series consisting of three, five or seven games. In the NFL, it's a true "win or go home" sort of a thing. There are no second chances. There are no home games and road games as it is just one or the other and you have to perform no matter what the situation. 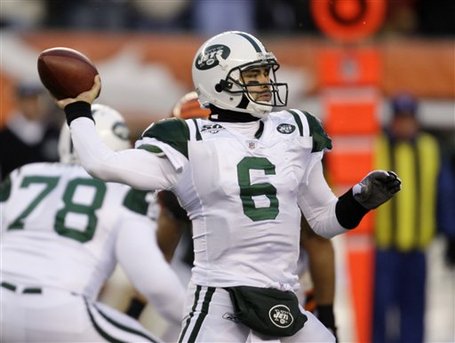 To kick off the weekend, the Cincinnati Bengals hosted the New York Jets. It was the first of three Week 17 rematches. Many felt that the Jets didn't belong since they won their last two games against two teams that rested. A good an even battle in the first half, New York started to pull away from Cincinnati in the third quarter after Thomas Jones' touchdown. Sanchez only had to throw 15 passes and made basically every single one count. The Jets executed their game plan to perfection, really. They won the time of possession, ran the ball successfully and didn't have to have Sanchez throw the ball to win. In the end, it was 24-14 in their favor. Rookie Shonn Greene out of Iowa had 135 yards on just 21 carries, picking up the slack for the usual starter Jones. The offensive line has three Pro Bowl players on it on the left side with left tackle D'Brickashaw Ferguson, left guard Alan Faneca and center Nick Mangold. Those guys controlled the Bengals' defensive line. Not only did the Bengals not a get a sack on Sanchez, they only managed to hit that rookie twice. He only dropped back 15 times, sure, but keep in mind of the holes they opened up for Greene. In the passing game, Dustin Keller had 99 receiving yards; Jerricho Cotchery, the number two receiver, caught half of Sanchez' completions; and Braylon Edwards had a big drop in the end zone which you probably saw. Next Sunday afternoon on CBS, the fifth-seeded Jets are taking on the second-seeded San Diego Chargers. 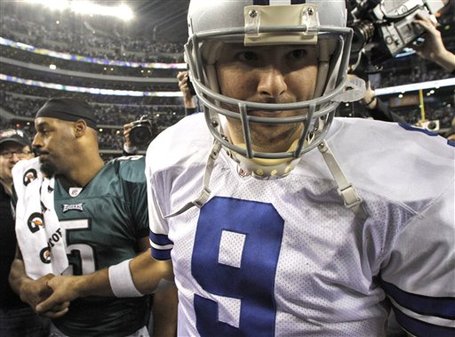 For the third time this season, Tony Romo led his team over Donovan McNabb and his. [via cdn3.sbnation.com]

The second game on Saturday wasn't as competitive as the first one. The Dallas Cowboys and the Philadelphia Eagles -- NFC East rivals -- just played last week. Unfortunately for Philadelphia, it was another embarrassing loss. After a scoreless first quarter, the teams combined for 34 points in the second quarter. Dallas, though, put up 27 of those 34 points. Touchdowns by tight end John Phillips, running back Tashard Choice and wide receiver MIles Austin including a pair of field goals from Shaun Suisham had driven the Eagles to the brink of elimination at halftime. McNabb never got going. Only 19-for-37 and a late meaningless touchdown, the Cowboys' defensive line decimated the opposition. DeMarcus Ware and Anthony Spencer particularly shined as the pair combined for three sacks and three tackles for losses. The loss of center Jamaal Jackson on the Eagles' offensive line proved to be significant. As you may have guessed, the Cowboys totally controlled the game and the 34-14 final score proved that. They ran 16 more offensive plays, had 10 more first downs and actually had a ground game working for them. Philadelphia ran it just 13 times while Dallas didn't even need Marion Barber to crack nearly 200 yards from an attack led by Felix Jones. The lone bright spot for the Eagles' offense was rookie Jeremy Maclin, who had a touchdown grab in the midst of a postseason record 146 yards for a rookie wide receiver. Next Saturday morning on Fox, the third-seeded Cowboys take on the second-seeded Minnesota Vikings. 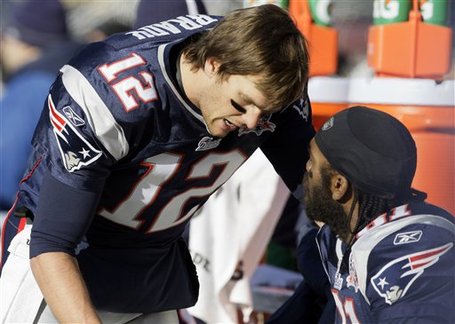 Tom Brady entered today's game 8-0 at home in the playoffs. [via cdn1.sbnation.com]

Uh, wow. It appears that Sunday started off the way Saturday had ended in terms of the blowout fashion. A horrendous start by the New England Patriots had them out of position all game against the Baltimore Ravens. On the first play from scrimmage, Ray Rice went 83 yards to the house. On New England's first possession, Terrell Suggs recovered a Brady fumble and Baltimore went in to take a 14-0 lead. An interception by Chris Carr led to Rice's second touchdown of the quarter, and the Ravens eventually had a 24-0 lead after the first quarter. How could the Patriots recover from this deficit? Well, they couldn't. After an eventful first quarter, the rest of the game was pretty systematic. The Patriots had managed some points before the half, but a 24-7 deficit had the Ravens in control. The second touchdown grab by Julian Edelman was as close as the Patriots were going to get. Willis McGahee's own second touchdown run of the game had sealed New England's fate as Baltimore came out on top as a 33-14 winner. Tom Brady uncharacteristically turned it over four times. As for the Ravens and their offense, Joe Flacco was just 4-for-10; however, when your team carries it 52 times for 234 yards, you can overcome something like that especially with a marvelous defense that is still captained by the likes of Ray Lewis and Ed Reed. Up next for the Ravens, a rematch against the top-seeded Indianapolis Colts on Saturday night. 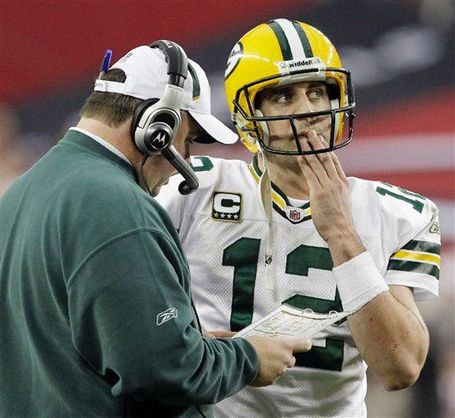 It was a shocking loss for Mike McCarthy, Aaron Rodgers and their entire team. [via a.espncdn.com]

Depending on who you were rooting for, we had ourselves another auspicious start. Little did we know that it would turn into the best game of the weekend. The Arizona Cardinals and the Green Bay Packers had met in Phoenix during the preseason, the regular season and now the postseason. Let's pick this one up -- their third meeting overall -- later on in the game. Down 24-10 at the half, the Packers didn't quit even when the Cardinals took a 31-10 lead. Answering back with touchdown receptions by Jordy Nelson and Greg Jennings from Aaron Rodgers, Green Bay was right back in it. Arizona countered, but so did Green Bay as the Cardinals held onto a 38-31 lead early in the fourth quarter. Finally a defensive stop, the Packers marched down the field and tied the game at 38 with under 11 minutes to play. Just under five minutes to play, Kurt Warner tossed his fifth score of the game with this one going to Steve Breaston. There was absolutely no defense being played in case you haven't figured it out. Shockingly, the Packers drove all the way down the field and Aaron Rodgers threw for another touchdown pass. Now with just under two minutes to play and the Cardinals having three timeouts, Arizona seemed like in pretty good position to win the game; however, Neil Rackers missed a 34-yard field goal try and we were headed for overtime. Green Bay, more specifically their do-it-all cornerback Charles Woodson, called tails and won the toss. The Packers had the ball. Brace yourself: 1,043 total yards, 90 points and 62 first downs later in a 45-45 game, it was a defensive touchdown that ended it all. Karlos Dansby corralled a ball that was sort of kicked by Rodgers and ran it in for a touchdown. The fourth-seeded Cardinals will next play at the top-seeded New Orleans Saints on Sunday night.

After a wild ending to the wild-card weekend, we'll see what the divisional round brings us. Some of it dub the second round as the most exciting round in all of the NFL, so the expectation will be there. There are definitely some interesting games and I'm sure we're all looking forward to it.