Share All sharing options for: NFL Playoffs: Divisional Round Review

This is the NFL's version of the final four. [via l.yimg.com] 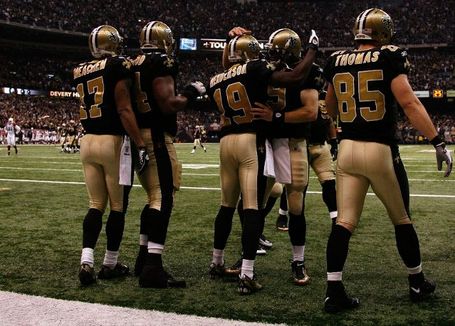 "Momentum? What's that, again?" [via a.espncdn.com]

Starting off the divisional round, we had the fourth-seeded Arizona Cardinals taking on the top-seeded New Orleans Saints. Right off the bat, boom, we had two touchdowns inside of the first six minutes thanks to Tim Hightower and a high-powered Saints offense led by Drew Brees. New Orleans, however, wasn't done scoring in the first quarter yet. The injured Jeremy Shockey caught a 17-yard touchdown pass and then an amazing 46-yard run by Reggie Bush took us back to his days at Southern California. That run also took the Saints to a 21-7 lead before the first quarter had even concluded. After a Beanie Wells touchdown, a flea flicker touchdown reception by Devery Henderson put New Orleans up by a 28-14 score. From there, it was more of the same for the Saints. Earlier, they had forced a fumble and the defense stepped up to stop the Cardinals' attack. Just past midway through the third quarter, an 83-yard punt return by Reggie Bush was the icing on the cake. The Cardinals, who had lost Antrel Rolle and Dominique Rodgers-Cromartie to injury during the game and Geno Hayes and Anquan Boldin before the game, couldn't nearly match up the Saints as New Orleans cruised to a 45-14 blowout victory. A visit from the Pope and the site of a Republican National Convention, the Louisiana Superdome has now earned the right to host its first NFC title game. The second-seeded Minnesota Vikings are coming to town for the NFC title. 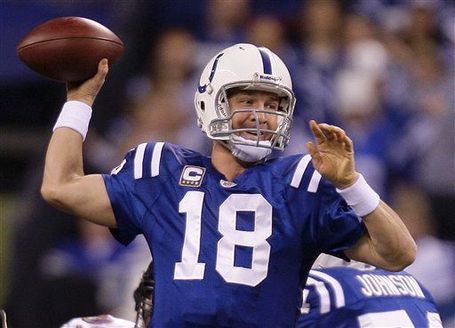 Although facing a great defense, it was just another day at the office for Peyton Manning's boys. [via a.espncdn.com]

Hoping for a more competitive game for the second game on Saturday, the top-seeded Indianapolis Colts hosted the sixth-seeded Baltimore Ravens. Like the Saints, the Colts entered the playoffs on a losing streak. Indianapolis, as you already know, rested its players for the final two games. Showing not really any signs of rustiness, the Colts jumped out to a 3-0 lead in the first quarter. Late in the quarter, the Ravens tied the game to make it 3-3 with a field goal of their own. It was a defensive battle, or at least it was until late in the second quarter. A Peyton Manning touchdown strike to rookie Austin Collie was followed up by another touchdown pass from Manning, with this one going to Pro Bowl wide receiver Reggie Wayne. Just like that, the Colts had taken a 17-3 lead into the half with all of the momentum. The Ravens offense was the story of this game, though, not the Colts offense. Baltimore couldn't put any points on the board. Their running game managed only 33 yards between stellar rushers Ray Rice, Le'Ron McClain and Willis McGahee. Joe Flacco, who started 4-for-4, turned cold and finished with an abysmal 48.4 quarterback rating. Amassing only 12 first downs all game, the Ravens managed only a total of three points. Another field goal, which proved to be nothing but icing, gave the Colts a 20-3 lead and Indianapolis would win that game by that very score. Next up, the Colts are hosting the fifth-seeded New York Jets for the AFC title. 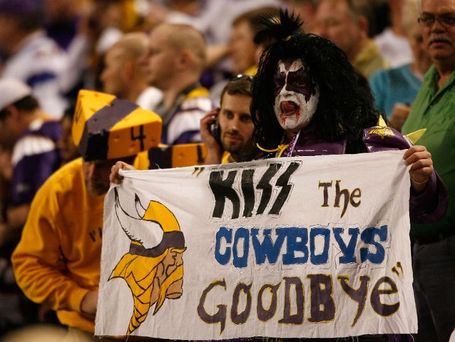 The loyal Viking faithful have been waiting a long time for this. [via a.espncdn.com]

To begin the Sunday slate, the second-seeded Minnesota Vikings were playing host to the third-seeded Dallas Cowboys. Yet again in the NFC, it was a battle of division winners. The Vikings drew first blood as we headed toward the end of the first quarter. A 49-yard touchdown strike from Brett Favre to Sidney Rice put Minnesota ahead of Dallas, 7-0. Shaun Suisham, though, cut the lead as his 33-yard field goal brought the Cowboys closer. Unfortunately for Dallas, they were never that close again. Another Sidney Rice score and a Ryan Longwell field goal had put the Vikings ahead at halftime by a 17-3 score. For the fifth consecutive playoff game dating back to last Sunday, a team had a two-touchdown lead at the break. The teams had traded punts back and forth and Tony Romo had already fumbled three times in this game; however, this time, it wasn't a Romo fumble. An interception by Ben Leber lead to more Minnesota points, this time a 20-3 advantage. For the icing on the cake, a beautiful Brett Favre pass to Sidney Rice for the third time on the day had put the game out of the reach for the Cowboys. Coming in 3-7 in his last 10 playoff starts and 0-3 all-time against the Cowboys in the postseason, Favre is over that. A dominating 34-3 shellacking over Dallas has set Minnesota up with a date at the Louisiana Superdome next week against the top-seeded New Orleans Saints for the NFC title. 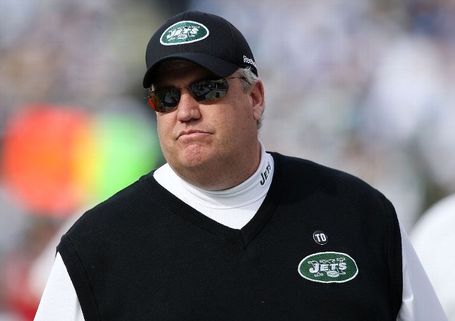 Rex Ryan and his team is the lowest seed standing. [via a.espncdn.com]

Wrapping up the divisional round of the playoffs, it was the fifth-seeded New York Jets taking on the second-seeded San Diego Chargers. Despite this first half being incredibly low-scoring, it was the most competitive. The trend of blowouts stopped here. As for the Jets, they couldn't get anything going offensively. With six drives in the first half, all six ended in punts. Their running game was relatively average and rookie quarterback Mark Sanchez couldn't get anything going. Still, you have to give credit to that San Diego defense. The lone Chargers score was a 13-yard grab by Kris Wilson from Philip Rivers which came early in the second quarter. Nate Kaeding, who is absurdly getting the nod over Sebastian Janikowski amongst AFC kickers in every honor, missed two field goals in the first half. To start the second half, New York started out with possession. Moving down the field, the Jets finally reached the scoreboard thanks to a 46-yard field goal by Jay Feely. The end of the third quarter was where the action was. After Sanchez tossed a pick to Quentin Jammer, Darrelle Revis made a great interception of his own. Following a great punt by Steve Weatherford, Rivers was intercepted by Jim Leonhard giving the Jets amazing field position in the red zone. Four plays later, Sanchez rolls right and hits Dustin Keller in the back of the end zone for a two-yard touchdown pass. With over 13 minutes to play in regulation, New York had taken a 10-7 lead over San Diego. Just over six minutes later, Shonn Greene went 53 yards to the house to give the Jets the 17-7 lead. A late touchdown by the Chagers proeved too little and it was too late. The Jets had hung on for a 17-14 win. Next week, they'll take on the top-seeded Colts for the AFC title.