Share All sharing options for: Report: Tom Cable Is Returning Next Season 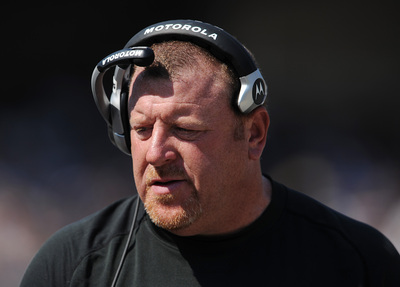 Tom Cable is 9-18 in one-plus seasons as a head coach. [via extras.mnginteractive.com]

According to ESPN's Adam Schefter via his social networking page, Tom Cable is returning as head coach of the Oakland Raiders next season.

Filed to ESPN: Tom Cable will remain as Oakland's head coach in 2010. Raiders say no decision final. But Cable will be back.
less than a minute ago from UberTwitter

ESPN has now picked up the story on Cable being retained.

Cable will fulfill the final year of his contract with the Raiders, the source said.

When contacted, Raiders spokesman John Herrera did not confirm that Cable would remain coach for the 2010 season, saying only that, despite meetings into the night the past two days, no decision has been reached.

Cable had one year remaining on his contract. But after meeting with Cable again this week, Davis made a decision that will be popular among players by keeping his head coach in place, the source said.

Cable had widespread support throughout the players in the Raiders locker room.

David White of the San Francisco Chronicle has acknowledged the ESPN report.

Cable and Raiders owner Al Davis have been in discussions off and on for three weeks since the season ended, with team officials unwilling to say if Cable indeed would be retained after a 5-11 season rocked with controversy and offensive struggles.