What Hiring Hue Jackson Could Mean

Share All sharing options for: What Hiring Hue Jackson Could Mean 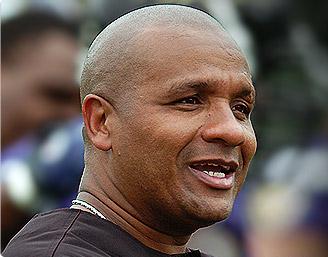 Bald is beautiful! [via citythatreeds.files.wordpress.com]

Our Oakland Raiders made a few headlines today with the hiring of Hue Jackson, the former quarterbacks coach of the Baltimore Ravens from 2008-09. Jackson, who has been coaching in the NFL since 2001, has coached many facets of the offense. With the Washington Redskins from 2001-02, he coached the running backs while performing both that duty and the offensive coordinator job in 2003. Jackson coached Cincinnati Bengals wide receivers Chad Ochocinco and T.J. Houshmandzadeh from 2004-06 prior to becoming the offensive coordinator for the Atlanta Falcons in 2007. As previously stated, Jackson spent the last two years with the Ravens. Now, he's coming to Oakland to coordinate the offense.

Now that we've gotten past the boring stuff, let's see what hiring Hue Jackson could mean for the team. 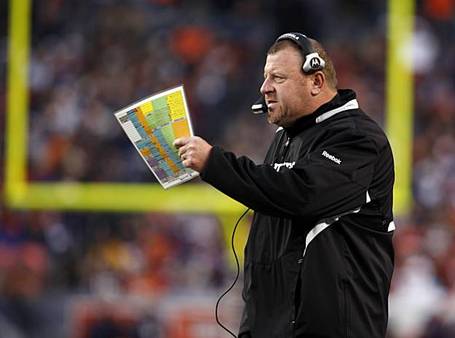 Put away the play sheet for good, Tom. [via imgs.sfgate.com]

First, hiring Hue Jackson means that Tom Cable no longer controls the offense. Could it mean much more than that, though? Cable doesn't run neither the offense nor the defense, so what purpose does he serve? Could he now be fired? Although ESPN reported that Cable was being retained, the Raiders have denied that any decision made has been a final one despite it being widely suspected. With Jackson being hired and Al Davis denying the reported final decision on Cable, one's mind starts to wonder. 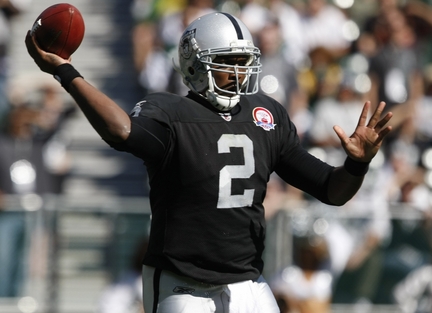 Could this be JaMarcus Russell's last chance? [via media.al.com]

Secondly, moving past the coaching staff, this could be a move made by Al Davis to help his project JaMarcus Russell out. Jackson has had success developing Joe Flacco, a fine quarterback from the University of Delaware that has played for the Ravens for both of Jackson's two seasons in Baltimore. Whether or not Davis still wants Russell as a starter is unclear to me since Davis is supposedly bringing back someone that benched "his guy." The hiring of Jackson, though, reaffirms those people's speculation of Russell being the starter for the upcoming season. 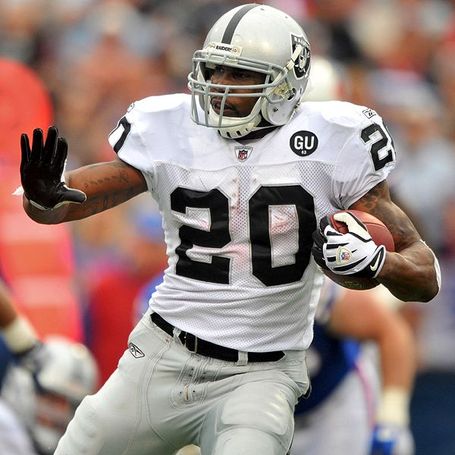 Utilizing Darren McFadden correctly would give the offense a new weapon. [via a.espncdn.com]

Next, will we finally start seeing some personnel being used correctly? Two things are pretty obvious that didn't really get done last year offensively. For one, Darren McFadden needs the ball in space. He needs to be lined up in all sorts of different positions to be successful. Get him in the ball in space and let's see what happens. Jackson's Ravens last year had a lot of success with running back Ray Rice, the man who led the team in receptions. McFadden was lined up as a receiver, yes, but it was too late in the season. Hopefully we build on that moving forward this season. Michael Bush, another young running back, needs to get the ball often between the tackles and more often than Justin Fargas or even McFadden. Bush was clearly our most effective rusher last year and didn't get the ball nearly as much as he should have. Hand him in the rock, Hue!

The leader of the Alabama defense, Rolando McClain, is still my pick. [via www.realclearsports.com]

Lastly, this hiring actually could very well impact the NFL draft in April. This whole offseason could be about Russell. Davis could be thinking, "I'll hire someone to help develop Russell and then I'll draft someone to protect him." There are some pretty damn good offensive tackle prospects available around the Raiders' picking slot at number eight. The name we're all familiar with, Bruce Campbell, and then Anthony Davis are potential targets now more than ever before. Other needs could be pressing like middle linebacker if Kirk Morrison isn't re-signed, but offensive tackle obviously caters toward Russell more. This could spell the end for a potential drafting of Rolando McClain.

Hue Jackson's arrival to Oakland brings about hope for the offense this upcoming season. Jackson, by working with three different positions in his coaching staff, can bring the best out of our talented young players at different positions. If nothing else, he can't be as bad as Tom Cable was at calling plays, right? Overall, I am pretty enthusiastic about this hiring. What do you guys think the hiring of Hue Jackson means?