Share All sharing options for: Hiring Mike Leach Only Makes Sense If... 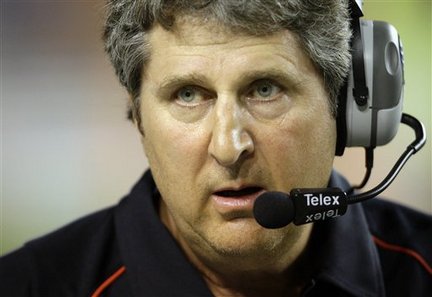 Let's face it: Mike Leach is the most talked about coaching candidate on the market when it comes to our Oakland Raiders. I'm sure you've all heard about the allegations surrounding him and his extermination at the Texas Tech University, a program he turned around from "laughing stack status" to a Big 12 contender. I will not bore you with what went on concerning Adam James and his alleged mistreatment; however, I do believe Leach is innocent but that's something for another day. Another thing I'm sure about is that all of you have thought about hiring Mike Leach at or one spot or another within our, say, anemic coaching staff. I'm here to explore the possibilities.

Hit the jump to read on and then cast a vote on the poll.

Before we go forward with the actual conundrum, let's a take step back really quickly to revisit the dead horse that's still kicking a little: Tom Cable's job. 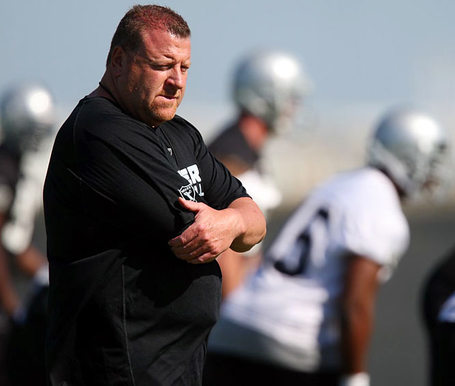 Tom Cable's days could very well be numbered. [via i.cdn.turner.com]

The most obvious position for Mike Leach seems to be head coach. That's easy. Tom Cable is just 9-19 in one-plus season at the helm. His play-calling, quite frankly, sucks. We all agree on that. What we don't agree on, however, is whether or not Cable should stick around. With those arguments against him, why should he come back? The players love to play for Cable. They really do play hard for him and some have gone on record -- including our best player Nnamdi Asomugha -- saying that they want him back next season. There are a few other arguments in favor of Cable such as the whole continuity thing and the fact that it's not all his fault. This team tied their best record since the 2002 season and if Bruce Gradkowski doesn't get hurt or if JaMarcus Russell is benched sooner, we could be something like 7-9 instead of 5-11. Again, it's not really Tom Cable's fault despite the play-calling. His hands were tied due to Al Davis' love affair with that guy that's in Las Vegas right now instead of team meetings. Basically, I'm saying keep Tom Cable. Well, if Cable is the head coach, where does Leach fit into this? I'm sure you already know where I'm going with this.

Earlier in the post before the jump, I talked about Mike Leach's success at Texas Tech University. For the sake of me bragging about his spread offense credentials, here's just a snippet of background information. He coached there for 10 seasons. In seven seasons, Texas Tech finished in the upper echelon. His record in his last seven bowl games was an impressive 5-2. While at Texas Tech, he broke more than 150 NCAA, Big 12 and school records. While being an offensive coordinator the University of Kentucky in the rugged SEC, he toppled 116 school records along with 46 SEC records. 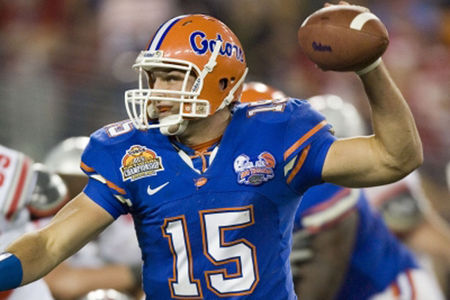 Tim Tebow is arguably the greatest college football player ever. [via ponderingsfrompluto.files.wordpress.com]

I made my case for the spread offense over a month ago. I still stand by that idea. Now, a guy that had tremendous offensive success with that system is available. Interestingly enough, a certain quarterback that used to play for the University of Florida under a spread offense is available in this year's draft. Tim Tebow, another person that had tremendous success in the spread offense, could be added to fit a big part of the puzzle. You all know that he was amazing at the college level and yet, has lukewarm draft status at best. I wouldn't draft him to run a conventional offense, but I'd sure as hell draft him to run a spread offense under the tutelage of Mike Leach. Tebow would then reunite with current Raiders wide receiver Louis Murphy, a person he had success with running the spread offense back at Florida. Mike Leach knows how to utilize talent, so running back Darren McFadden can finally not rot away. Johnnie Lee Higgins, even if he isn't exactly a great one, brings the speed element to the system with his bands being better than Darrius Heyward-Bey. The possession receiver would be Chaz Schilens, quite possibly Tebow's Riley Cooper. Tebow loves throwing to his tight end Aaron Hernandez, something he can do here in Oakland with the reliable Zach Miller.

Sure, maybe I'm dreaming. Maybe I'm too hopeful. I know that this scenario won't play out even though it easily could be transpiring right now. Go for broke, Al, go for broke! What do we have to do lose? At least this time, we can say that we honestly tried to put a winner on the field.