It's Never Too Early to Talk 2010 NFL Oakland Raider Draft!

Share All sharing options for: It's Never Too Early to Talk 2010 NFL Oakland Raider Draft!

Well it's my favorite time of the year, the offseason. The speculation, the analysis, the talent evaluation, simply heaven for me.

While some say it's too early to talk draft, it's never too early for this Oakland team which goes into the offseason as top-10 pickers. Exactly where we need to be.

We can't just ride on luck and miracles to win games like we did this year. Baltimore showed us that when you face a physical, in your face team, you gotta be ready to take them on man-for-man. Baltimore gave us a reality check that yes we beat teams like Philly and Cincy and Pittsburgh, but that we're still not ready to keep up with them on any given Sunday.

With early picks, we can get some great talent for immediate impact and long-term upside. With the skill positions of RB, WR, and DB starting develop very nicely, Davis will have to look to the trenches and the front-seven. So here's some draft options that I know we'd like, and ones Davis would too. 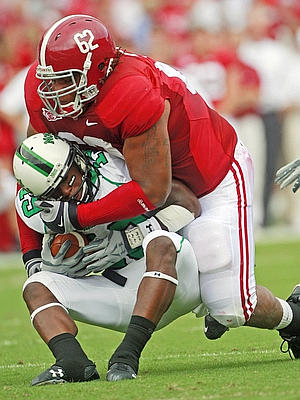 Mt. Cody, the 365 pound giant of a defensive tackle, could be the answer to our run defense woes. While he only posted 20 tackles, that's not really his job. Cody eats up blockers like he does breakfast so that other members of the D-Line or the linebackers can get to the back for a nice tackle near the line of scrimmage. There's no way you can put a single man on Cody and expect him to keep Cody contained.

Now many will argue that he might end up as the next Terdell Sands, someone with the size but not the strength or technique to make an impact. However, Cody actually cares to work at his game unlike Sands. And not all of that 365 pounds is fat. Terrence has some nice muscle to him, especially in his legs which allow him to get good burst off the snap to get under blockers and shove them out of the way.

So why would Al Davis take him? Because he's such a physical, athletic beast. It's not hard to be impressed by Cody when you see him blasting through SEC quality offensive lines on a weekly basis. I think Davis would love to have such a mountain of might on his defensive line. 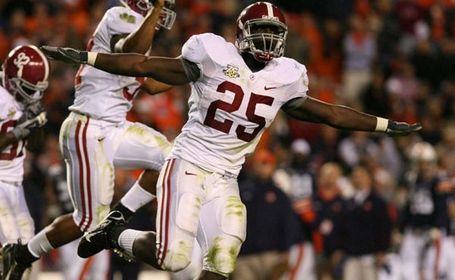 I'm blown away by Rolando McClain. No one who's 258 pounds should be this fast. The 2009 Butkus Award winner, McClain's amazing ability to find the RB is what interests me the most. He always seems to know how a play is developing and how to react within a moment's notice. It also goes without saying McClain knows how to level someone if they run it straight at him.

McClain would play well in Oakland system where you typically see the MLB playing a middle zone. McClain does a great job playing those little middle zones managing to pick off 2 passes doing so for Bama. McClain is also a great blitzer. We saw Marshall send blitzes more than usual this year, and I think McClain would be better than Morrison. McClain is strong, physical, and has an amazing awareness of where a play is going. No one leads a defense like McClain.

Now Davis loves old-school traditions, and I think he'd love to have a hard-hitting backer in the middle of his defense to bring back the days of Villapiano into his head. And even if Davis wants to keep Morrison at MLB, McClain can move outside like Maualuga did for Cincy and still bring that high energy and awareness. 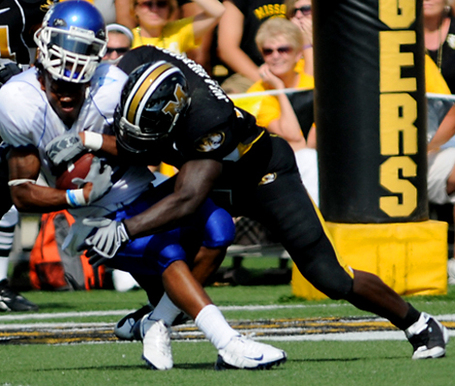 If Davis does as I think he will and keep Morrison at MLB, Sean Weatherspoon of Missouri could really be a great SLB for us.

At 245, he’d be our largest linebacker, and maybe tied for the fastest with Howard. Really, Weatherspoon is like the next thomas howard. Always sniffing out the running back on nearly every play, Weatherspoon would really help round out the linebacking corps since he’s so fast that he can do wonders in pass coverage or on blitzes.

Weatherspoon could also play MLB because of his size and strength if Davis would happen to want Morrison at SLB. And here’s the kicker, Davis could very well draft him. 6-1, 245, should post the fastest combine 40-time for any 4-3 linebacker, Davis is probably salivating to get this guy.

And of course this would please us because of just how much he would help the run D. I can’t state enough how aggressive and how violently vicious he is against the run. It’s like watching a bloodhound chase down and wounded deer. He’s just flat-out faster, stronger, and more violent than anyone I’ve ever seen in college.

Weatherspoon is officially the man I want us to draft. 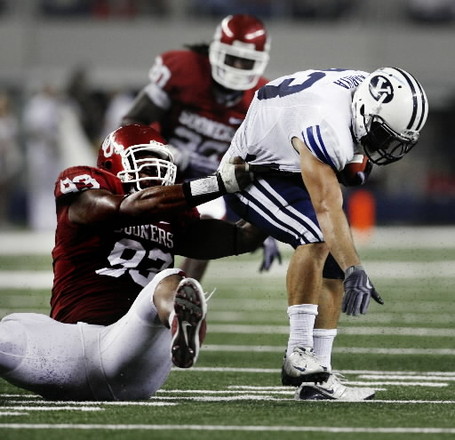 Gerald McCoy is just........wow. Only 298, McCoy is still a good fit for NT. While undersized, not many DT's in this draft are capable of taking up two or three blockers in the run, and still able to be a great pass rusher. 6 sacks in each of the last two years in Oklahoma, McCoy is a game changer.

He can penetrate through the line to make a play in the backfield, whether that be a sack or just stopping the running back on short-yardage. McCoy seems to turn it up a notch in the most important points of a game and really makes an impact.

What McCoy lacks in size, he makes up for in speed and strength, and that's all Davis would like. For 298, he plays like he's 325 and would be a tremendous help to this D-Line. The only thing I can fault with him is that he does over pursue and lose track of the play quite a bit. But he can disrupt that offensive line for everybody else even when he does.

Any of these four outstanding players would be great additions to the Oakland Raiders, and I'd love any of these four. I think Al Davis might just want them as well.