Campbell versus Gradkowski, My Final Verdict

Share All sharing options for: Campbell versus Gradkowski, My Final Verdict

It's been a while since I last wrote, but I gotta put my final statement on this debate. I'll say right off the bat that I love Bruce Gradkowski and Jason Campbell equal, however I'm largely on the Campbell side of the fence here.

I won't do much of an intro here, but read ahead to see why Campbell is clearly the best option as the starter for the Raiders.

5 versus 1. This is the only stat to me that matters. All other stats are insignificant when held up to this stat. This stat is the number of wins for Campbell and the number of wins for Gradkowski respectively. Jason Campbell has 5 wins in 9 games or 5-3 (St. Louis=indecisive). That's a winning record people. Even Gradkowski last year only won 2 games. In 6 games, Bruce has 1 win, and even then I'm tempted say he only has 1/2 of a win.

That one win was against St. Louis back before they found out they could win games. Campbell started half of the game with Gradkowski coming in at the start of the second half. In that game, Campbell had went 8 for 15 for 87 yards and 1 INT. We were only down I believe by one possession. This was a game that Campbell probably could have won in the second half (second half featured better running game, and much better run defense). Nevertheless I will give the win to Gradkowski and keep it 5 to 1. After all, the same thing could be said of Campbell versus San Diego, though I don't believe Bruce would have won that game.

Campbell just flat out wins games. Well maybe our defense and running game are actually what wins games (and Ford's special teams), but Campbell doesn't lose games. Gradkowski, as much as I know I'm gonna take flak for this, loses games. How? He doesn't protect the football.

In 6 games and only 4 starts (one of those starts ended up only being like the first quarter versus San Diego), Gradkowski has 7 INT's. Meaning, he averages a little over 1 INT per game. Interestingly enough, the ONLY game he didn't throw an interception, was in that San Diego game in which he only attempted 7 passes and got pulled very early.

Meanwhile, in 9 games and 8 starts, Jason Campbell has only thrown 6 interceptions. That's 3 more games and 4 more starts with one less interception. Campbell is doing what JaMarcus Russell could never do, manage a game without throwing interceptions. Even Gradkowski can't do that.

In only one of his five wins has Campbell thrown an interception (against KC he threw 1). Now of course, Campbell has been far from perfect. Three losses in ugly performances with quarterback ratings of 69.7 back when Tennessee was amazing, 10.7 in what can be called one of the worst playcalling performances by Hue Jackson in Raiders history, and 26.2 against a very tough Pittsburgh team.

However, every quarterback no matter how good has bad games. Drew Brees against Cleveland and Arizona, Mark Sanchez just this last Monday versus New England, Peyton Manning through a good bit of the year, Jay Cutler versus Washington, etc. Campbell might not have so many if he wasn't constantly thinking that each throw might be his last. Granted you don't want your players getting too comfortable, but that's way too much stress in an already stressful game.

Now while Campbell will take more sacks due to some issues with reading pressure and not getting the ball out quick enough at times, he doesn't throw interceptions nearly as often as Gradkowski who takes less sacks. Jason Campbell gives Raiders fans something they haven't had since Rich Gannon, a quarterback who doesn't throw at least 1 interception per game.

Jason Campbell has played through a lot (poor receiver play, inconsistent O-Line play, slow starting running game versus Seattle and Kansas City notably, pressure of being benched, chemistry issues due to constant depth chart changing and benching, etc), but has produced a winning record and just might get Oakland possibly in the playoffs. Or at the very least, a 7-9 record (can't see us going 6-10).

The debate of Gradkowski versus Campbell was ended later than it ever should have been and only because Bruce was put on IR. Campbell is no doubt Oakland's best QB since Rich Gannon, and has eliminated the weakness of QB in Oakland finally. Raider nation, I present you your QB, Jason Campbell. 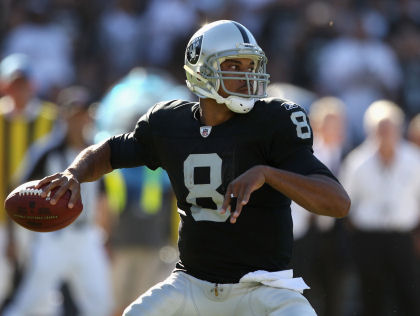