Share All sharing options for: Rumor Mill: Anquan Boldin on the Trade Market 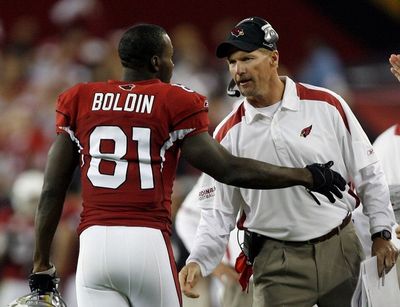 Anquan Boldin's days in Arizona appear to be numbered. [via rodonline.typepad.com]

Yes, I know that most rumors aren't true; however, this one seems pretty legitimate to me. According to Aaron Wilson, an insider for the Baltimore Ravens, Arizona Cardinals general manager Rod Graves is listening to offers for wide receiver Anquan Boldin. Again, not all rumors are true and it's interesting to note that someone covering the Ravens has picked this up. The Ravens, though, are certainly interested in acquiring a big name wide receiver for young stud quarterback Joe Flacco. Also, we've definitely heard Boldin's name before in trade talks.

Hit the jump to see some details and then vote on the poll.

Rotoworld had this to say on their NFL headlines:

Graves' comments seemed to indicate that there's nothing in the works right now, but Boldin is a prime candidate to be moved in a draft-weekend trade. The Ravens and Dolphins are expected to show interest, and there are sure to be a couple of surprise teams intrigued by Boldin as well.

We've explored some of our own trade possibilities around here concerning Nnamdi Asomugha and a report about almost our whole roster being on the market.

I'm sure you can put two and two together here by now. A star receiver in Boldin is available and there have been a few reports out there about us getting involved in trading, so there could be something brewing here down the line. 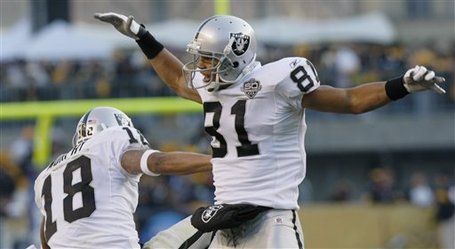 A young stud between Louis Murphy and Chaz Schilens would have to be involved. [via cdn2.sbnation.com]

The Oakland Raiders have some young talent at wide receiver with guys like Chaz Schilens and Louis Murphy. We've also drafted some guy from Maryland with the seventh overall pick recently. But back to the young talent, we have Schilens and Murphy. A guy like Anquan Boldin -- who has the capability of stepping in right away and being the number one target -- can really boost the wide receiver corps, give a quarterback confidence and also give him a legitimate go-to guy at all times.

If there is a knock on Boldin, it's the injuries. Looking back over the years recently, Boldin missed four games due to injury in both 2007 and 2008 and missed just one game in the regular season in 2009. Through it all, with the high-powered Cardinals attack, Boldin has performed very well. In his seven years in the league, Boldin has averaged just under 84 receptions per season. Last season, Raiders wide receivers combined to catch the ball a whopping 99 times although it wasn't entirely their fault.

Through it all, I think this something that we have to at least kick the tires on despite Boldin in the last year of his contract. Of course, he'd have to sign an extension. Boldin is very explosive and gives us a boost where we need one and that's in the passing game. I like Schilens and Murphy, but I don't know if either one of those two guys can reach the level of an Anquan Boldin. Lastly, I reiterate that we need to at least kick the tires on this.