Raiders need OT in the Mold of Bob "the Sledgehammer" Brown

Share All sharing options for: Raiders need OT in the Mold of Bob "the Sledgehammer" Brown

Taking an OT in the 1st round is nothing new for Oakland - it's happened 9-times before and this year the glaring need for an OT upgrade cries up to heaven. This site's most recent draft polls confirm (66% in favor) that an OT is our single most necessary positional upgrade (with DT at 2nd place - 34%).

We must carefully evaluate OTs, and players who may convert from G or C to OT, to make a wise choice. Let's begin by asking ourselves, "what is the ideal OT prototype?"; "What essential qualities does an OT need?"

Oakland had two of the best OTs of all time - both are in the HOF: LOT Art Shell (8 Pro-Bowls / 2 on First Team) and ROT Bob Brown (6 Pro-Bowls / 5 on First Team). I believe the better of the two is Bob Brown based on film, number of 1st Team Pro-Bowls, and statements by men in the HOF who certainly would know:

Art Shell: "I learned a whole lot from him. A lot of little things, like how to formulate a plan to attack a defensive end - going into a game trying to have at least three ways to take this guy on. And he was as quick as anybody I've ever seen. He could come out of his stance on a pass set, leap off the ground like a frog, backwards, as quick as a hiccup, and then he would lash out at the defensive end. He was unbelievable."

If we take Bob Brown for our OL model (he played G in college and converted to T in the NFL  - being the highest Guard selected in NFL draft ) and pick accordingly, we should be able to get this one right. Read on...

Brown was fierce. When he reported to Oakland's training camp as a FA everyone watched as he came onto the field - his first day of practice. Brown jogged past the others without saying a word and paused in front of the goal post, squared off, then suddenly delivered a forearm shiver with such explosiveness and focus that the goal post crashed to the ground. Mr. Brown's actions on the field remain some of the most eloquent statements ever made in football. 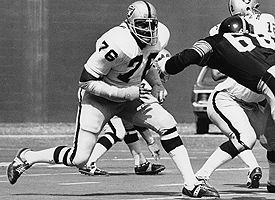 Bob Brown believed that Offensive Linemen should be the aggressors - the ones on attack, "Offensive".

DE Hall of Famer, Karl Eller (6 Time Pro-Bowler / 5 on First Team): "Bob Brown was probably my most feared competitor. He had a demeanor that was different from most offensive linemen. He would strike out at you. His intent was to do bodily harm. He was not satisfied with just doing his job. He wanted to inflict pain."

One last quote, this one from Bob Brown himself when asked to describe his own playing style: "I was very attack oriented. I didn't want to be a shock absorber. I wanted to be the guy who was delivering the shock. I was extremely aggressive for an offensive player. I used to liken it to being a 16-pound sledgehammer." 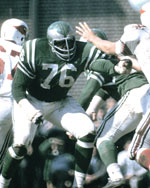 Okay, now that we have the perfect OT paradigm firmly in our minds, our mission is to evaluate the prospect pool and find the one who most closely resembles Bob "the Sledgehammer" Brown in his physicality and warrior spirit.

Footnote: If Al Davis reads this, please offer Mr. Brown, who lives in Oakland, a coaching position with the Raiders. I believe he could work wonders with, at the very least, our Offensive Line. Thank you.