It's all over now. [via cdn2.sbnation.com]

The draft is an exciting time of the year for all football fans and it's no exception here. All the excitement and fun is over, however, as the picks are in and the trades have been made. From Thursday to Saturday, 32 NFL franchises have done just about everything their power to make their respective franchises better and Al Davis and company were among them. Here, I recap the 2010 NFL Draft for our Oakland Raiders.

Hit the jump for the pick-by-pick grades and then take a vote on the poll. 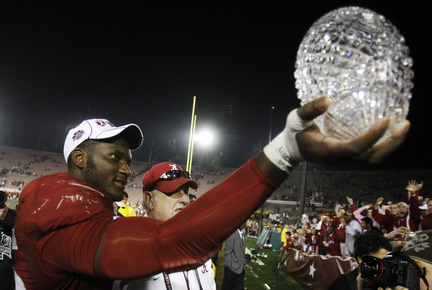 Rolando McClain is bringing his winning ways to Oakland. [via media.al.com]

Inside linebacker or middle linebacker, call him whatever you want. It doesn't matter because the kid is a football player and was a pretty damn good one for the Alabama Crimson Tide. Now, McClain is coming to Oakland and taking over for Kirk Morrison. This was a surprise, but not a bad surprise. Just about everybody had written off McClain coming to Oakland, but Al Davis and company made a sensible decision with the eighth pick. After the aforementioned Morrison was dealt, this pick made a whole lot more sense. A true leader and someone of high character, McClain will be a big step in improving the anemic run defense. Can he alone put an end to our run defense woes? I don't know, but he can help in a big way. I know Rolando will make us proud. 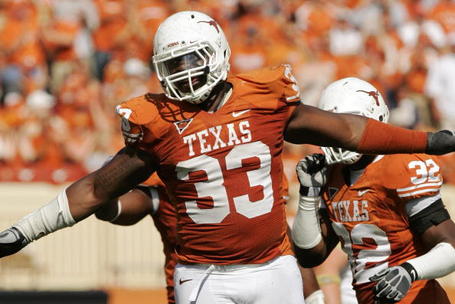 Lamarr Houston recorded 12 sacks from 2007-2009 at Texas playing at end and tackle. [via justblogbaby.com] 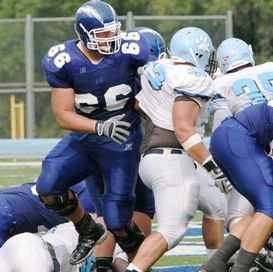 Jared Veldheer is just the second player from Hillsdale to be drafted this high. [via cdn.cloudfiles.mosso.com]

Clearly needing to address the offensive line, offensive tackle seemed like a logical pick. Passing up on Bruce Campbell (which proved to be genius later on) who was considered the best tackle available at this spot by the respected Mike Mayock of NFL Network, Jared Veldheer was selected. A lot of Raiders fans were harping for him before the draft even began. Filled with potential, the fans may have to wait on this guy as he's considered a project by many; however, the value for him at the 69th pick was good and we didn't mess up with this pick. He will help the offensive line and that help is definitely warranted. 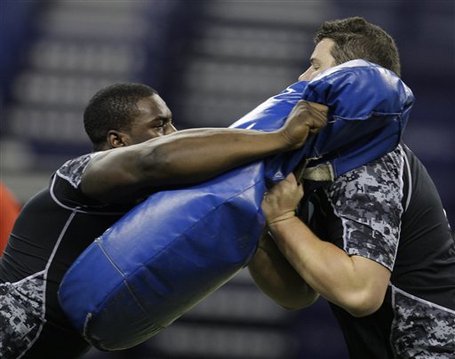 Bruce Campbell really impresses in his workouts. [via cdn1.sbnation.com]

By far the best offensive tackle available on the third day of the draft, you couldn't get better value out of this pick. Bruce Campbell was someone the Raiders clearly had their eye on and suspicion turned into confirmation with the selection of Maryland's combine wonder. Taking an offensive tackle, though, when you just took one in the previous round with other needs is the reason why this is an "A-" instead of something higher. Sometimes, you just can't win 'em all. Still, I have no complaints with this selection. Coming from a zone blocking system in Maryland, I think Tom Cable is most definitely pleased with this pick himself. 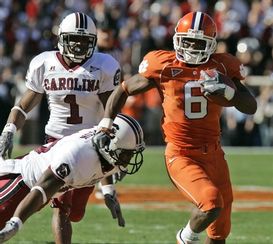 Jacoby Ford was the fastest player in the draft. [via cdn.cloudfiles.mosso.com]

Kirk Morrison was sent to the Jacksonville Jaguars along with a fifth-round pick and the Raiders moved all the way up to this spot. Listed as a wide receiver, the Raiders grabbed return specialist Jacoby Ford. Dubbed "the fastest football player on the East Coast," Ford now heads to Oakland with all of that 4.28 40 speed. I gave this a lower grade than some. I talked myself out of a "C+" and bumped it up since I'm hoping he can do some things on offense as well. Still, a return specialist could have been addressed in the sixth round while we still had needs at defensive tackle, cornerback and offensive guard at this point. 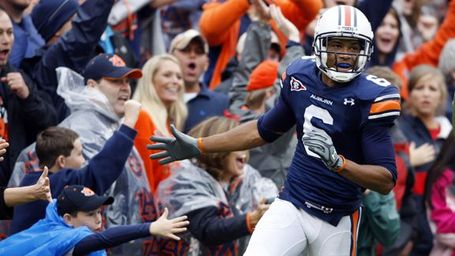 In the 2009 Outback Bowl, McFadden had two interceptions with one returned for a score. [via a.espncdn.com]

Once you put the Cal bias aside (for me, anyway), you come to the realization that Walter McFadden was actually a really nice pick even over Syd'Quan Thompson. (Sorry, Squid.) McFadden, who has returned three of his nine interceptions over the last two seasons for touchdowns, has great speed and that shouldn't surprise us with a cornerback pick. With that 4.4 40 speed, McFadden doesn't get beat deep and that's something we saw a few times too many with Chris Johnson. Most importantly, his high football IQ fits the system since he he played man-to-man at Auburn so much. It wouldn't surprise me if he competed for a starting job in camp and the preseason. 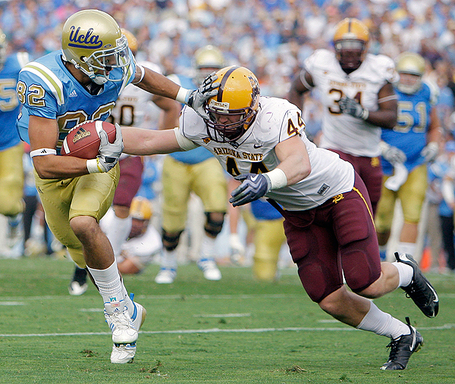 Travis Goethel never gives up on a play. [via nfldotcom.files.wordpress.com]

Perceived as a special teams pick, this selection was a very questionable one considering that a fullback, running back, defensive tackle, offensive guard and center were bigger needs. Goethel, a four-year senior and an honorable mention for his Pac-10 defense, managed to accumulate just under an average of 65 tackles per season for the Sun Devils in his last three years. He does supply us with a little depth at the position. That doesn't explain the pick to me even tough he works hard and is a great competitor. Again, we had bigger needs and should have addressed them with this pick. 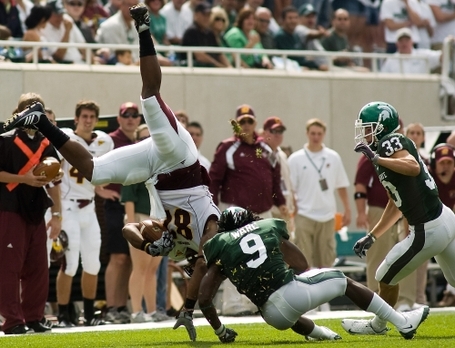 Jeremy Ware can deliver the hit despite weighing at just 184 pounds. [via www.statenews.com]

While a lot of people were hoping for Syd'Quan Thompson of Cal, we instead went with another cornerback with dreads that wears a single digit. Jeremy Ware started just one season at Michigan State while being a four-year senior. His strength is tackling and can hit you hard. He impressed at pro day with his vertical and broad jumps, so the athleticism is there. At this pick, I don't think anyone can disagree with taking a cornerback while it appears that the defensive tackle ship has sailed. 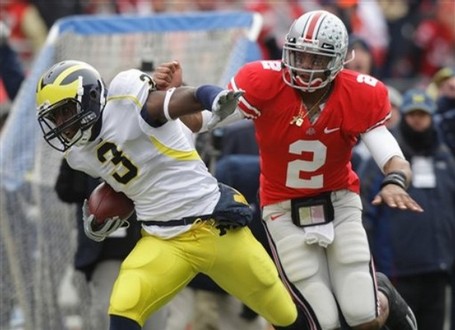 Stevie Brown will likely transition back into a defensive back with the Raiders. [via cdn1.sbnation.com]

Instead of taking an offensive guard, center, defensive tackle, running back, fullback or even a project quarterback, the Raiders went with a safety. Playing out of his position in his senior year, he still led the team in tackles at outside linebacker. Still, this pick is puzzling as other needs existed instead of someone to play the same position as Mike Mitchell, Hiram Eugene, Michael Huff, Jerome Boyd and Tyvon Branch. It's hard to see him make the team as a safety, though. 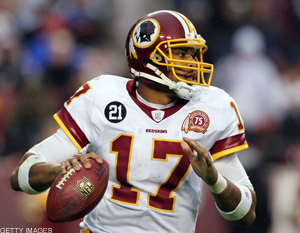 Jason Campbell is looking forward to a new beginning and so are we. [via www.sportsbusinessdaily.com]

Trades: Jason Campbell in, Kirk Morrison out -- Grade: A

In a move that significantly improved the three-day draft, the Washington Redskins shipped Jason Campbell here for a 2012 fourth-round pick. This was absolutely a fantastic move. Campbell is, without a doubt, the best quarterback on the roster with all due respect to Bruce Gradkowski. I expect Campbell to be starting under center in Tennessee on September 12, 2010. Another reason this is a great trade is because Al Davis seems to finally realize that JaMarcus Russell isn't an NFL quarterback. Earlier in the day, while I was asleep, Kirk Morrison was traded to the Jaguars along with the 153rd pick in exchange for the 108th pick. A Morrison trade became pretty likely after the drafting of Rolando McClain on Thursday. Getting the 108th pick wasn't bad value for Morrison and I am fine what we received in return. I wish him all the best in Jacksonville. More importantly, though, acquiring Jason Campbell was the most important thing the Raiders did in the last three days.