Share All sharing options for: Raider Nation is still alive and well

Despite constant out lash from the fans of other teams in the AFC West, the Raider Nation is still loud and proud. Regardless of the reports from "journalists" (I call some of them Jokesters) like Cam Inman, and Monte "fool, stool, tool" Poole, as well as countless ESPN Psycho"anal"ysts and Warren Sapp, Raider Nation Stands united in the face of adversity. You can take the Raiders fan base out of the pride, but you'll never take the pride out of Raider Nation.

The Nation will fight for their team as hard as the fans of any other team in professional sports. Despite seven straight seasons of 11 or more losses, Raider Nation is still as strong as ever. No matter who says what about the team, the central hub of Raider Nation still contends that every year will be the year the Raiders turn it around and rise from the ashes.

But how much is too much? When does it become time to say enough is enough...it's just never going to happen? Seriously, this franchise is a train wreck, right?

There is a guy on bleacherreport.com who (I don't know if he still does) used to wander around that website to the different Raiders articles and pick fights with the Raider Nation. He always used to close his statement by saying, "From the ‘Real Nation', the original ‘Charger Nation'". I don't know why he thought the Chargers have a Nation. Theirs is more like a gaytion. Yeah, Charger Gaytion; I like it, I'm going to trademark, you ready:

Is it too much, I don't think so. Sorry if I 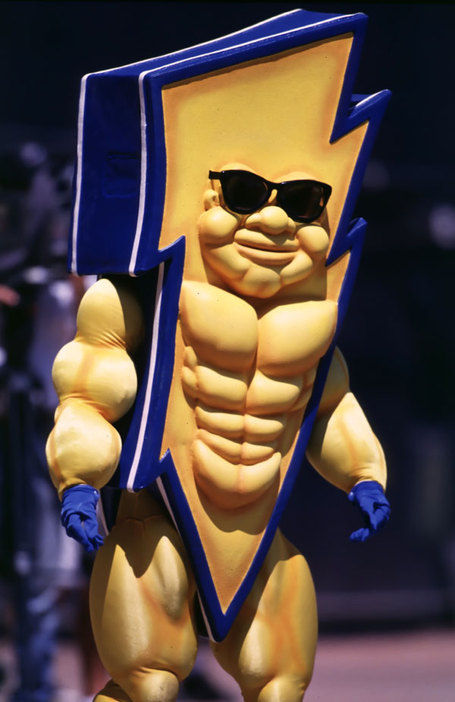 offended anyone. It's just that the Raider Nation eats lightning and craps thunder. I think the Nation could take "Bolt Man".

Anyhow, getting back to my story, every game the Raiders play is entered with hopes and prayers from Raider Nation, no matter how hollow the hope might be. You see, Raider Nation believes in "Any Given Sunday" and it is the opinion of the Nation that you can ask Pittsburgh, Cincinnati, and Philadelphia about that.

I got some good news Raider Nation. This year, the hopes are not false. I know beyond any reasonable doubt that the Raiders will get out of the double digit loss column this year. They will get over the hump of beating the Chargers this year. They were on the brink last year and now they are better. In their two games against the Chargers in 2009, they lost by a combined 12 points. In 2008, the combined deficit was 37 points, 2007 it was 27, 2006 was 34. This twelve point discrepancy was with JaMarcus Russell at quarterback!

I'm confident that in 2010, the Chargers will go back under the doormat to be walked all over and that is right where they belong. There is only one REAL Nation, and that is Raider Nation.

In Chiefs news, check this out: Sporting News Magazine thinks the Chiefs will finish second in the AFC West with a 9-7 record. Notwithstanding the fact that they gave the team the following position grades:

I can't make this stuff up guys. It's really too good for T.V. and that's why they had to put it in a magazine. They say, "While Kansas City is at least another year away from being serious playoff contenders, this should be a season where major progress is made towards that goal." The overall grade given by Kansas City Star reporter and the writer of the Sporting News article, Adam Teicher, was an 85. Now, granted I'm no math whiz, but I don't see how you get an 85 with two D's, three C's, one A, and a B. Taking what I know these grades to be, my average of the sum of all pieces is 76.142857142857142857142857. Also known as, not a 9-7 team.

The Oakland piece in the magazine was written by the Nation's finest, Steve Corkran. (He, He)

Their grades are as follows:

Yes, Raider Nation is strong in the face of adversity. It is very rare that you see credit given to the owner of the Raiders these days. So it was very manly of Clay Travis to say things like, "Al Davis is more responsible for the modern-day NFL than anyone else alive in the country. He is, without a doubt, the single greatest living influence in the NFL.

"I know, I know, it comes as a shock to think that a wrinkled old man who still uses the same kind of overhead projector that your seventh grade pre-algebra teacher did in 1991 could be the man most responsible for the NFL's success today. But Al Davis is."

By the way, this is an article that everyone in Raider Nation should read. (For those who don't know, to read it just click on the "manly of clay" gray area above.) Clay will probably get an earful about it from fellow fan house writer Jay Mariotti, but I've never really cared for Jay...most people don't.

My point is, in the face of adversity, Raider Nation stands united. Weathering the storms of a thousand and one cast away comments looking to take a dig at the fans who have supported the team so prudentially in good times and in bad. When they do turn this thing around, I will know who the real Raider Nation consists of, will you?

Email me your Raiders questions @ bret@tfdssports.com