He-who-shall-not-be-named helped the Raiders by leaving ... can Dick do the same?

Share All sharing options for: He-who-shall-not-be-named helped the Raiders by leaving ... can Dick do the same?

Seymour, who is currently listed as one of our seven DEs, is holding out again, missing OTA's, wanting more money than he's worth, and reminding me of the unmentionable-one (he who is 'dead to me' waived 5/6/10). Richard Seymour, whose local fan-base never fails to defend his lack-luster play by asserting his team influence, that "Richard is a great influence on the Raider's younger players." Well, that positive intangible quality is now in question.

Last year Dick refused to report to the Raiders (after NE traded him) until the the Raiders reminded him of the repercussions available to Oakland through the NFLCBA. Now, after being given the exclusive franchise tag, this declining former Patriot, who only looked like his former self in two games last season, is holding out for the big money.

With the giant OT, Jared Gaither, now signed to a 1-year deal with Baltimore there are still FA options available to Oakland of significant benefit - such as the partially deaf seasoned veteran OT Flozell Adams who is still available AND one of the top 4 DTs in the league (on the field) Albert Haynesworth - whose still at odds with the Redskins with whom we have been making some sweet deals of late (Jason Campbell and Rock Cartwright).

Another, more pervasive and pernicious, argument for keeping Dick at any cost is our draft-debt - the questionable decision to trade our 2011 first-round pick to NE for Seymour. The argument goes, since we have invested so much we are bound to keep him. Such reasoning is unsound, for if it were made into a principle we would still have He-who-shall-not-be-named on the roster at QB. We should make the best choices NOW without looking back. We need a very good OT and we need a very good DT. Certainly Seymour could be traded for Haynesworth who is easily better than any DT we have.

I'm much in favor of getting DT Haynesworth and picking up the Dallas waived Flozell Adams. With the likes of Mario Henderson and the thoughtless blabbermouth Dutchman Veldheer (was it whistle-blowing cheese-eating? was it idiocy? was it the desperate act of a struggling rookie?) and Tommy Kelly as starters at OT and DT respectively - we must do better if we are to flip our season record around (from 5-11 to 11-5). We've made some decent strides this post/pre season and we should continue to do so and correct what is left - the deficiencies at OT and DT which we are too often compelled to defend with dubious affirmations of "he'll do better". Let's get these weak spots filled right away - before training camp - and then we will know that we have done all we can do to prepare for the campaign just over 2-months away. 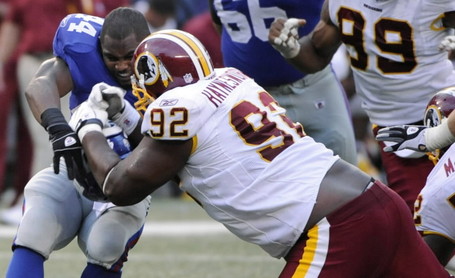 Albert is very consistent - the opposite of Tommy Kelly.