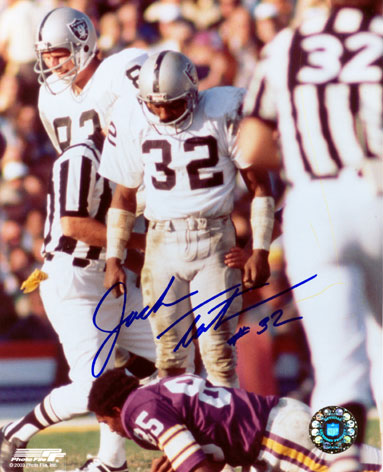 Raider Nation has lost one of its all time greats today with reports that former Raiders safety Jack Tatum died this morning of an apparent hear attack. According to 10TV.com which first reported the sad news, Tatum suffered for years from diabetes:

Tatum suffered from diabetes for years.  He lost all five toes on his left foot, and his right leg was amputated.

The hard-nosed safety's autobiography was titled They Call Me Assassin.  For the youngsters in the crowd, YouTube will get you up to speed regarding Tatum's substance, and his style.  (And please wait to see Tatum's hit on Earl Campbell.  Then stick around to see whether Sammie White's head was in his helmet while it was rolling around on the field.)

A member of the College Football Hall of Fame, Ohio State presents during the season a "Jack Tatum Hit of the Week" award.

Tatum embodied what Raider football was all about coming from a different era when football was really football. He will always be one of my favorite Raiders and my condolences go out to his family and all of the Raider family for our loss. RIP Jack.