The Passing Days of Training Camp

Share All sharing options for: The Passing Days of Training Camp 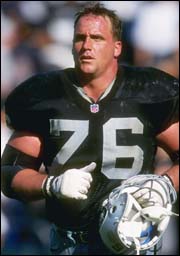 The men in the know: McDonald and Tafur and Dakin

It was a padless Friday in the Napa Valley for our beloved heroes of the gridiron. After the first practice with real tackling Cable elected to have the guys run without pads.

"Tempo of the day was really good," sayeth the Cable Guy. "(We) took them out of pads, wanted to see how they'd react to it. (I was) very pleased with today."

I confidently assume one of the reasons Cable was pleased was due in large part to the play of his new QB. Campbell threw some of his best balls of practice. Highlighted by a 40 yarder to DHB, a couple of beauties to Zach Miller and another 40 yard strike to Chaz Schillens.

Schillens made a great grab on his, while being tightly guarded by Chris Johnson, and then landed awkwardly on his shoulder. The good news is, his foot is fine. The bad, as Spirals pointed out, Chaz has a stinger. It is not supposed to be severe, but this is Chaz we are talking about.

Overall, the offenses seemed to turn it up a notch. Michael Bush had a long run that highlighted a successful day of inside running. But it was the passing game that won and lost the day. Check out the thrilling end to the exciting scrimmage of two-hand touch football.

In the padless scrimmage, the second team was down 28-23 with just over two minutes left when Captain Comeback, Bruce Gradkowski, was picked off by Stevie Brown--who made a great read and nice play on the ball.

Speaking of...the OG Captain Comeback, Jim Harbaugh, was on the sideline--along with some of his assistants. If Cable didn't feel the heat of his coaching seat prior to this, he must now. It has been widely accepted that if the Raiders job were open, Harbaugh would be on a short list of candidates. No sympathy for the Devil mind you; such is the life of an NFL head coach.

Harbaugh came bearing gift, in the form of Steve Wisniewski. The Wis took the opportunity to address the O-line. Langston Walker talked to the press about it after. Walker:

I don’t think anyone requested him to come out here. He came out here on his own, just talked about being a pro and the things that he did to make himself better every day. Just sort of shooting it to you straight. Instead of coaches telling you, you actually get somebody who played 13 years or however long he played, went to however multiples of Pro Bowls. It’s sort of hard to be like, ‘Ah, that guy doesn’t know what he’s talking about.’ It means extra

And it means extra to me that not only are these players getting speeches from former all-pro's, but Raider greats. It has been too long and too forgotten since this franchise has been good. The thought of players who have had success here sharing it with the current group, makes me feel better about being a Raider. I hope it has the same effect on the players and will hasten the return of that Raider mystique.