We know that the Oakland Raiders are moving into the 2010 season with Michael Bush and Darren McFadden as their top running backs, but who will be the man behind them both? In training camp right now, there's a very good battle taking place between Michael Bennett and Rock Cartwright. Both have been performing well in training camp (then again, it is just training camp) despite harboring a different skill set each. So, assuming the team can only carry one, who should be kept and who should be told to look elsewhere? Let's take a closer look at Bennett and Cartwright with their past endeavors and divulge into their skill sets. 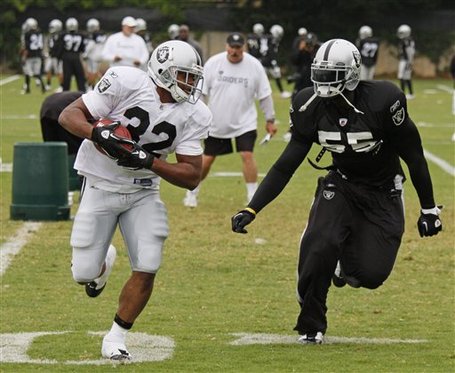 Michael Bennett has shown a great burst in training camp. [via cdn3.sbnation.com]

Starting alphabetically with Michael Bennett, this running back is a speed back who broke into the league in 2001 as a first-round pick out of the University of Wisconsin. In his second year, Bennett posted a career-high in yards (1,296), yards per carry (5.1) and touchdowns (5) with the Minnesota Vikings. Since then, though, Bennett's career has gone downhill. Injuries have played a role for sure. Since his breakout season in 2002, the former Badger has played just more than 11 games once and that was in 2005. In the last four years, Bennett has played for three different teams. Speed is Bennett's thing and he could be useful for a team that's looking for some of it out of the backfield. With McFadden also here, Bennett isn't a "need" since his skill set is in our backfield already. 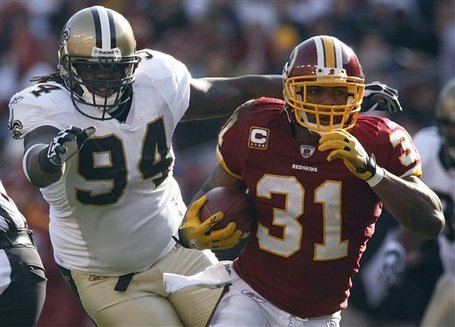 Rock Cartwright was a captain in 2009. [via cdn3.sbnation.com]

Moving on, the well-rounded Rock Cartwright brings other things to the table. While we're on the topic of running backs, that's not the only backfield position the Raiders are having a battle for. Fullback, a position Cartwright is familiar with from his Washington Redskins days, could be somewhere we can utilize Cartwright for different looks or a change of pace. As a running back, Cartwright has carried the ball 60 times in a season just twice and that was in 2003 and 2009. In 2003, Cartwright averaged 3.9 yards per carry in games in which he carried the ball at least 10 times. That's the biggest sample size we have from Rock. Last season was Cartwright's best receiving the ball, though. In the 11 games he did catch a pass, he caught 27 of them and caught at least three in five. All in all, he hasn't performed that badly and could surprise some people with a chance.

When it comes to making a decision like this, any little thing helps to get a leg up on the competition. Special teams is what I think should get Cartwright over the top, particularly his ability to return kicks. Noticeably in training camp, Cartwright has shown impressive bursts on drills when it comes to kick returns. In 2006 and 2007, Cartwright was a fabulous returner which included him breaking a Redskin team record in return yardage. Although that was years ago and we do have Jacoby Ford now, depth can't hurt. I don't want to see guys like Gary Russell with the football in his hands ever again on returns or otherwise.