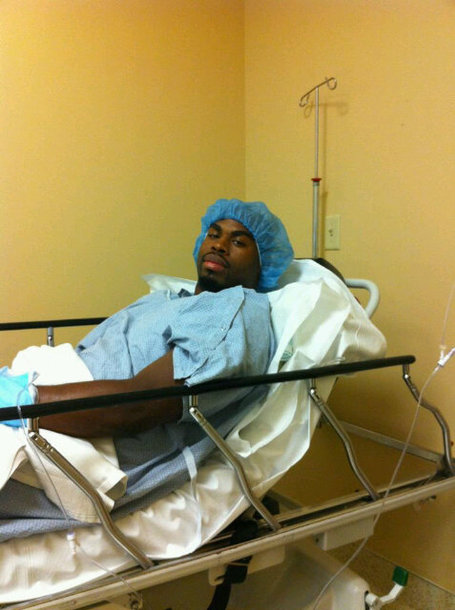 Raiders running back  Michael Bush has reported that he had "successful" surgery on his injured left thumb Monday. Bush reported from his Twitter account that he has what is called a "Bennett Fracture" for which he he needed screws inserted in his left thumb to repair the fracture.

This news is further unsettling by Bush's disjointed report that he could offer no time table for his return to action.

Bush may well suit up for the opener and wear a huge thumb cast, but my quick study of what is involved with a Bennett Fracture and its recovery does not inspire hope.

Bennett Fracture is described as follows:

In 1882, Edward Hallaran Bennett, MD, described the fracture of the base of the first metacarpal that bears his name. Bennett described the anatomic details of the fracture and suggested that early diagnosis and treatment are imperative to prevent loss of function of this highly mobile joint.

Unless properly recognized and treated, this intra-articular fracture subluxation may result in an unstable arthritic joint with secondary loss of motion and pain. Because the thumb carpometacarpal (CMC) joint is critical for pinch and opposition, this injury may severely affect function.

The CMC joint consists of an articulation between the trapezium and the metacarpal base composed of 2 reciprocally interlocking saddles with perpendicular longitudinal axes. Ligamentous stability at the trapeziometacarpal joint is maintained by the anterior (volar) and posterior oblique ligaments, the anterior and posterior intermetacarpal ligaments, and the dorsal radial ligament. The anterior (volar) oblique ligament originates on the trapezium and inserts into the volar ulnar beak of the thumb metacarpal. This is the most important ligament in maintaining CMC stability. The dorsal ligament is not as strong as the volar ligament but is reinforced by the APL.

The therapy following surgery will require Bush to be fitted with what is called a Spica Cast: 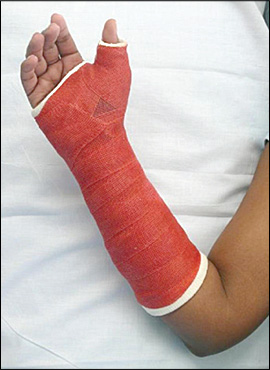 That image is the most minimal of what Bush will have to wear if he were just a pedestrian and with that, the prognosis is as follows:

A well-molded thumb spica cast is utilized for 2-6 weeks depending on the stability obtained at surgery. Once the cast is discontinued, a thermoplastic splint is fabricated and a protected mobilization program is initiated until fracture healing is complete.

Displaced intra-articular fractures predispose the patient to arthritis and loss of motion within the affected joints. Unfortunately, even after restoration of articular congruity, some patients develop posttraumatic arthritis secondary to the osteocartilaginous injury sustained as a result of the initial trauma.

Other potential postoperative complications include loss of reduction with recurrent joint subluxation and instability, infection, and sensory nerve injury.

This is a serious injury folks, effecting Bush as a human regardless of the sport he plays for a profession. But with regards to football and the immediate impact on the Raiders now will be quite unsettling to say the least. Superficial medical reports may read like doom and gloom, but for the moment that is all we can go by now. Maybe there is a way for Bush to play through this and recover at the same time, but it would seem clear that his effectiveness will be severely diminished.

The Raiders under Hue were to be a power running team, that regardless of the lip service be paid to McFadden as the "co-running back", Bush was the key to this team's running game. The Raiders do not have a pounding, between the tackles back on their current roster. Hue will have to change-up the offensive philosophy now and run more screens and swing passes to McFadden and Bennett. The "running game" will not be power, but will be there only to support what will have to be attempted as a passing offense. That would be fine if the Raiders had an offensive line that could pass block well enough to keep the QB's alive.

Let's hope the best for Bush, but the Raiders will have to get really creative now.

What are your thoughts Nation? How do you think the Raiders should modify and re-design their current offense if Bush is to be diminished for a lengthy period of time?