We Have a Real Game to Prepare For

Share All sharing options for: We Have a Real Game to Prepare For 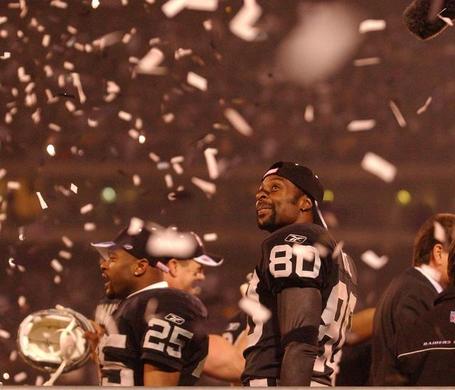 Turns out Jeff Fisher was a spy and now he has the weapons. Al Davis told Tom Cable to not do something, but Tom Cable is doing it anyway and Jason Campbell is getting ready to go into battle despite 5 broken ribs, electrical burns on his testicles from a failed interrogation, a gun shot wound in the head and a hangnail.

As you can see, even if you missed it, the stage is set. The Titans are anxious for atonement and the Raiders are hungry to show their improvements. We have discussed the off the field factors, I think it's time to look into the on the field ones. As I said, the match-ups of this game worry me. I like to end on a good note--so, let's start with:

The Sources of Concern

Chris Johnson vs. The Raiders D

The emphasis of the Raiders off-season was to go from being run defenseless to having a run defense. This means an entirely new LB corp. And the starting LB corp for Sunday's game is going to be the newest in new. Quentin Groves will start and get his first PT with Death Ro and Wimbley.

These guys are not going to be eased into anything. This is a scary rushing attack. After the Titans made the switch from Collins to Young last year, the Titans averaged 176.1 yards a game rushing.

Chris Johnson averaged an obscene 5.6 yards per carry last season and he has a penchant for breaking off big runs. Combine this with the Raiders nasty tendency to give up big runs and...uh-oh.

That's not it. The general consensus with the Raiders new LB's is that while they look better equiped to stop the run, they may suffer in pass defense. We have seen part of this play out already as Trevor Scott got moved in favor of Groves whose pass D is improving. I hope it is improving while he sleeps, eats and breathes.

Johnson is their main weapon catching the ball--leading the Titans last year in receptions with 50 while ranking third in receiving yards with 501.

It has been suggested, by the brain trust on this fine site, that Tyvon Branch should be a CJ spy (that is their Chris Johnson. Let's hope he doesn't have to spy ours, but after last week...). Then leave the Raiders LB's to try and guard the Titans TE Bo Scaife. Or as SOB so eloquently stated Ho or Gro on Bo. While were at it, why not Ho, Ro, or Gro on Bo.

Scaife is a solid TE and one of Young's favorite weapons. Scaife was third on the team in catches last year with 45.

That would leave us with a CJ spy and someone to know Bo, but the problem is Vince Young is worthy of demanding a spy himself. Last season and this pre-season Young averaged roughly 5.5 yards a carry. Still, when playing the Titans, it is best to worry about covering their Johnson.

The Titans D-line vs. The Raiders O-line

The Titans D-line doesn't have the big names many are used to and they may be better off for it. Their fans are jacked on the play of this young and deep line. They have dominated in the pre-season. They are allowing only 3.2 yards per carry and have not given up a rushing TD. I know this is pre-season, but these numbers look legit.

In the 3rd pre-season game against the Panthers--a game in which the Titans only had 5 days to get ready for--they held DeAngelo Williams to 13 yards on 9 carries.

To top all of this off, the D-line hasn't had it's full compliment of players during the pre-season, but are now on all systems go. DT Jason Jones has fans especially excited, which means welcome to the NFL Jared Veldheer.

Somehow, someway the Raiders offensive line has to keep the threat to run the ball legit. Going against the 4-3, Veldheer shouldn't have to worry about the kind of blitzes he whiffed on against San Francisco as he'll be able to focus more on the man in front of him.

This is a huge test for what is largely perceived as the team's biggest weakness.

What Helps Me Sleep

The Raiders Secondary vs. The Titans WR's

While the Raiders have to contend with the dual threat nature of Vince Young and Chris Johnson, this task should not be completely unmanageable. They won't have to worry about lending the DB's any extra help on the WR's. The Titans passing offense does not revolve around it's WR's.

Nate Washington led the Titans WR's with 47 catches and Kenny Britt led the team with 701 receiving yards last year. With Nnam reportedly sticking to the teams best WR, I think it is safe to cross Washington off of the threat list. And with Kenny Britt getting a little funny in the head and having a horrific pre-season, he doesn't look to be much of a concern either. It was speculated he might not even play in the opener, but it now sounds as if he will be the starting slot guy.

The other starter is the unspectacular Justin Gage, who caught a total of 28 balls last year. A nice soft landing for Stanford Routt as he emerges from the dog house.

This should help free up the safeties for support on Johnson and Scaife. Also, it should help make the Raiders deadly in passing situations as they'll be free to blitz or have extra guys in coverage.

The Raiders Passing Attack vs. The Titans Pass Defense

The Titans pass Defense killed them last year. They were 30th in passing yards allowed and 30th in passing TD's allowed. Granted these numbers can be skewed as teams pass more when they are behind, but the Titans were an even 8-8 and they finished 23rd in net yards allowed per pass attempt. However you slice it their pass D struggled.

And they didn't do much to upgrade it. The teams best corner ,Cortland Finnegan, missed most of the pre-season with a groin injury, but is expected to play on Sunday. As we saw with our own Chris Johnson, the first game back for a DB can be a doozy.

The #2 DB spot was up for grabs and they still haven't named a starter. It'll likely be Jason McCourty. He has been pushed by rookie Alterraun Verner who had an impressive camp, but it is seldom a good sign when a rookie DB, not named Woodson or Sanders, is pushing for a starting spot.

The safeties remained unchanged for the Titans and that's a good thing for the Raiders. Chris Hope and Michael Griffin followed up '08 pro bowl seasons with '09 anti-pro bowl seasons.

If the Raiders can keep Jason Campbell upright, he should be able to exploit some things in the pass game. With Finnegan likely shadowing Louis Murphy, this may be an excellent opportunity for DHB to get off to a fast start.

Another big factor here could be the fact that the Titans are playing without OLB Gerald McRath. He is serving a 4 game suspension for cheating. He is replaced by the lackluster Collin Allred.

The lone veteran upgrade the Titans made in the off-season was acquiring OLB Will Witherspoon. Witherspoon is solid in coverage, but not good enough that he can keep track of Zach Miller, Darren McFadden and Marcel Reece at the same time.

The Titans are going to have to pick: Let the safeties help with the backs and TE's or keep them back to help the DB's. Bottom line is someone should be open.

Vince has looked good in the pre-season. His stats are mostly in-line with last year, while raising his completion percentage. He still has a tendency to fumble the ball though. This pre-season has fumbled 3 times. He fumbled 8 times in his 10 games last year.

Key Match-up of the Game

The Titans O-line vs. the Raiders D-line

The Titans line play last year was stellar and on paper, they look to be even better this year. The only loss was the aging and still unemployed Kevin Mawae. They replaced him with their LG from last year and have inserted the up and coming Leroy Harris at LG this year. The Titans lineman are all in their prime as their ages range from 26-29.

Still, this looks to be strength against strength. The Raiders D-line looked good in the pre-season despite never being at full strength. This D-line now has Richard Seymour and John Henderson ready to go at full speed.

Something To Think About

Chris Johnson gained more yards from scrimmage last year than anyone in the history of the NFL. This means he gets a lot of press for his many quotes and also that he took on a lot of wear and tear.

He led the league by carrying the ball 358 times. This is a hard thing for a back to recover from. Here is a great article outlining the effects on a RB the season after a huge workload.

Here is an excerpt to give you an idea:

Through the 2009 season and out of the 23 running backs in the history of the league with 370 or more carries in season, in the very next season of play, (17) experienced a significant decline in fantasy production, (3) tore their ACL, and (6) effectively had their career ended. Only Eric Dickerson, Walter Payton, and LaDainian Tomlinson did not show any real effect or drop-off in fantasy point production in the season following their 370+ carry season

While Johnson didn't break the 370 carry mark, his 50 catches are enough to include him into this category. Seriously, check out the article. It is fascinating. Not only does it chart every RB that had more than 370 carries it also charts RB's whose carries rose 33 percent from the previous season and they suffered similar declines. Chris Johnson is right on the borderline of that threshold as well.

After all this breakdown, I think we all know that you never know what you are going to get on Sundays. Especially when it is Week One and especially, especially when you are talking about the Raiders.

This article is a great example. It is centered on survivor pools and details how the Raiders can exceed expectations. Since 2000 the Raiders have won a game where they were 9 point or greater underdogs 8 times. This includes 6 in the previous two seasons.

This appears to be the only outlier in the upset equation. Division games, home teams and Monday night games all are in line with the averages, but not our Oakland Raiders!

In short, who the hell knows what is going to happen on Sunday. So, I'll say this much:

I don't believe in moral victories, except when I do and this is one of the rare times where I could.

The Titans have strengths where the Raiders have weaknesses. Also, Jeff Fisher is throwing his coaching wild card here (I believe an effective coach and/or circumstance can raise team play above their ability level roughly twice a year). Given these factors, I think my reactions will be as follows:

If the Raiders keep it close and lose, I'll be happy and looking forward to a solid season.

If they get blown out, I'll be disappointed, but still be willing to wipe the slate clean for Week Two. This is a young team and I expect them to improve as the season goes.

If they win, I'll be thinking playoffs.