I'm ready to call the Aaron Curry trade a success. It has only been on game, and Curry really didn't play all that many snaps as the Raiders opted to run a nickel or dime package with a safety playing a hybrid LB spot on many occasions.

However, I saw enough to know that this team is better because of this trade. Let me highlight the moment this became apparent. It happened on back-to-back plays.

The kickoff after Jacoby Ford's kickoff return Quentin Groves blows up a blocker like he wasn't even there and makes a fantastic tackle on Cribbs to stuff the Brown on the 12-yard line. It was a great special teams play, and this is the hidden benefit of the trade. Groves is a special teams prototype.

I never thought Groves would, but it was great to see he wasn't busy sulking over being demoted and is ready to contribute anyway he can. Now onto Curry; after the jump.... 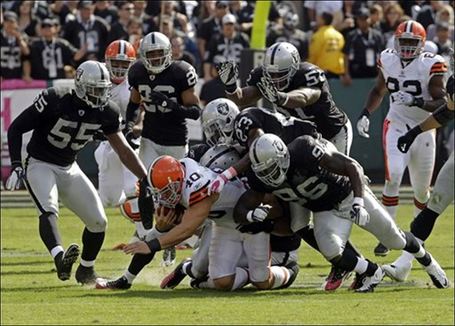 The next play Peyton Hillis ran wide to the offensive left. He had blockers in front of him, including the mighty Joe Thomas who was unengaged. Aaron Curry came barreling in right through Thomas and blows up the play. for a 2-yard gain.

This is the kind of impactful tackle the Raiders have not been getting out of their LBs. The LBs have made to many tackles five yards and further down the field.

Then, with 9:15 to go in the third quarter, Hardesty got a pitch right. Curry came from the opposite side of the field, eluded the blockers and mad a sure tackle to limit it to a 2-yard gain.

This is only two plays, but they were two plays that no other OLB on the roster has been making. It was a great sign.

Curry was lost in coverage on a short pass to Smith with 7:16 to go in the second quarter. It was short in the flat and Curry got pinned behind the DB and receiver running over the middle. We already knew Curry has struggled in pass coverage, and given he only has one practice with this team, I was not shocked about this play.

The benefits of Curry to this defense in pass plays remain to be seen, and if Sunday's game is any indication the Raiders are going to use more DBs and plenty of blitzes to limit the pass coverage liability of their LBs anyway.

There is zero doubt in my mind, however, that this run defense is much better off with Curry.