Raiders vs. Vikings: Much Will be Determined by Veldheer vs. Allen

Share All sharing options for: Raiders vs. Vikings: Much Will be Determined by Veldheer vs. Allen

The matchup of this game is without question Jared Veldheer vs. Jared Allen. That is what you get when a game features a team that is horrible on pass defense, but has a defensive end on a record breaking pace for sacks. If the Vikings stand any chance of stopping the Raiders passing attack it will have to come from Allen. 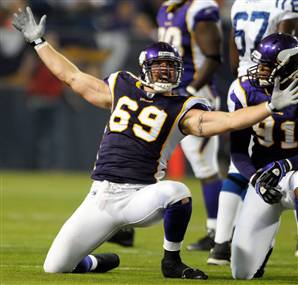 And if the Raiders are going to slow down Allen, It will have to be Mr. Veldheer doing the majority of the slowing. This is something Veldheer has done an excellent job of all season.

Veldheer has only really had one game where he struggled, and that came in the debacle against Kansas City when he allowed four pressures to Tamba Hali. Jump over for more....

One thing worth noting is that Veldheer hadn't allowed a sack until Palmer's first start of the season against Denver. He then allowed another sack San Diego. This may be to Veldheer adjusting to Palmer (drop depth etc) or it may just be coincidence.

All in all, he is having a very solid year. Let's compare his numbers to some other left tackles. I looked at the numbers for Joe Thomas, Jake Long, D'Brickashaw Ferguson and Duane Brown. These men are widely regarded as the four best left tackles in the game.

*Numbers according to Pro Football Focus

A lot of things factor into these numbers. It is important to remember that the Raiders are a run heavy team and they keep as many players in to pass protect as any team. This certainly helps Veldheer, but it is balanced out by the fact that the Raiders run a deep attack pass offense, which requires the lineman to pass protect for longer period of time than most teams.

Veldheer is well equipped to block Allen. He has more success against down lineman than OLBs. That said, Allen has been destroying every lineman he has faced. He has at least a half of sack in every game he has played this year.

The responsibility of limiting Allen will not be Veldheer's alone. When game planning against the Vikings that plan starts with containing Allen. That means that Kevin Boss, Michael Bush and Marcel Reece will have his back on many plays.

Allen will undoubtedly wreak a certain amount of havoc on the Raiders' pass game, but I don't expect this to be the Jared Allen show. The Raiders have done an excellent job protecting the passer all year, and I'd be surprised if Allen got more than four combined sacks/hits/pressures.