This was a great week for this sponsored post to start. The Raiders' defense was making plays all day. There were at least 10 solid candidates for the award, but we are only picking five. Here are the five. 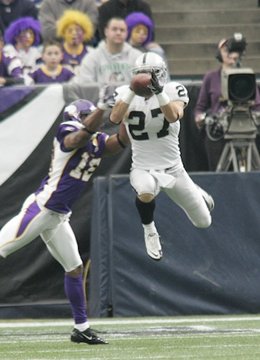 Giordano is really proving to have a knack for making plays. This INT and ensuing return was huge. It ensured all momentum in the second quarter belonged to the Raiders. Giordano was waiting in deep coverage on the play, and it was a poor decision by Ponder. Matt made him pay. 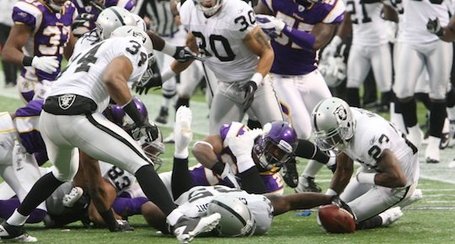 I know. This is a special teams play. But I am putting it on the list because it was bad ass and it deserves to be mentioned. Meyers comes off of a block and lays a picture perfect hit on Booker. The Raiders than began a scrum for the ball amongst himself. DVD came up with it, but as we can see here The Rock had it first. 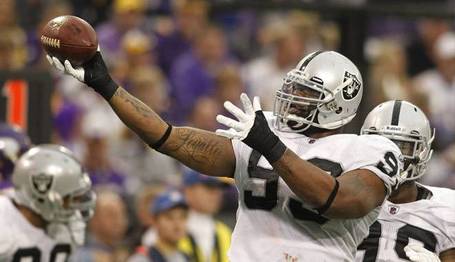 Ponder with a another horrible decision here. He tried to throw across his body with Sheppard just sitting there hoping he would throw his way. Sheppard again displays that he possible has the worst hands of any human being ever, and deflects softly to Tommy Kelly's monstrous mits.

The most impressive thing was that Kelly was there to make the pick. Remember when we all used to have a coronary over Kelly's obese laziness? Those days are long gone. Kelly went above and beyond following this play, and it paid off in a huge way.

Again another horrible decision by Ponder. He thought he could muscle a ball into an area with two Vikings and three Raiders. Routt was sitting and waiting. Ponder winged it in, and Routt showed fine hands pulling it away from his body, and then did a solid job getting his feet in.

Ponder incomplete to Harvin - Broken up by Branch

You can't blame Ponder for this decision. He had Percy Harvin isolated on strong safety. Tyvon Branch just made a hell of a play and essentially ended the game. Branch was outstanding this game, and he is having a solid season.