Rolando McClain is guilty of using horrible judgment. There is no denying that. To what degree, we can't be as certain.

The degree to which McClain was a bonehead, combined with the ability of his legal team, and his attitude going forward, will greatly affect his future with the Raiders. This is not going to be a speedy trial.

McClain was arrested Thursday on misdemeanor assault, menacing, reckless endangerment and firing a gun inside the city limits. According to a statement released by Lt. John Crouch of the Decatur Police Department, it is alleged that Ro held a gun beside a man’s head during an altercation and the man begged him not to shoot.

Not shockingly, McClain's attorney Billy C. Burney II has a different side to the story, "Mr. McClain asserts his innocence. We are confident that Mr. McClain will be cleared of all charges."

A transcript of the 9-1-1 call aligns with the accusation of a shot being fired from close range. The caller was from a neighboring house and too far away to ID a specific person. No weapon has been found.

There does not appear to be any clear cut evidence at this point. Any criminal charges that Ro faces likely won't be until after the season, and given that they are all misdemeanors, and Ro is likely going to receive some excellent legal counsel, I expect his sentence, if any, will be probation, community service etc.. *Disclaimer: I am not a lawyer, nor did I stay at a Holiday Inn last night.

Now, Roger Goodell certainly doesn't need guilty verdicts to suspend players. He can toss down suspension under the umbrella of "violating the league’s personal-conduct policy" for essentially anything he wants, and without any adherence to precedence.

For instance, he suspended Ben Roethlisberger for six games after Ben was accused of sexually assaulting a woman in Georgia. That suspension was later reduced to four games. Big Ben was the first, and I believe only player, to be suspended even though he was not arrested, charged or convicted of a crime.

However, that was the second similar charge against Ben, and Goodell is not keen on repeat offenses. This is the first incident that McClain has been involved in as a pro that could be construed as him violating the personal conduct policy.

There is no way Goodell is going to let this slide without taking some kind of action. This picture sure as hell didn't help his cause with the league. 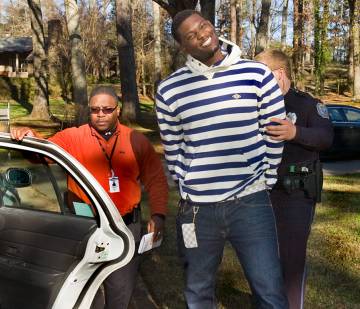 Given that this is Ro's first run in with the conduct policy, my guess is that Goodell will let the legal process run its course, and wait for more information to come to light, which would mean that any suspension likely wouldn't be issued until next year.

It is almost guaranteed that Ro will play against Miami. The Raiders could suspend, but I can't see them doing that in a case where it is he said-he said. You better believe that they will have choice words and stern warnings. They may even decide to cut him in the offseason is they aren't satisfied with his attitude.
But as far as the present goes, don't expect them to hand down any suspensions. Here is Hue Jackson when asked if McClain would. This was before McClain was arrested, but after the incident.

As far as I know. I can tell you we understand and know exactly what's going on, and we feel very comfortable with our information and we don't have any further comment at this time.

I'm not going to believe anything anyone says. After an incident like this, it is very likely that both sides are embellishing the story in a way that suits them.

If a person was assaulted by a group of people that included Rolando McClain then it would be potentially financially beneficial for them to say McClain did something that caused "pain and suffering."

That doesn't mean they are lying, it just means I am not going to blindly believe it.

I will also say that I certainly don't want to believe it. Rolando has earned my respect on the field this year. He has been playing solid football while playing through a high ankle sprain, and this defense is way better when he is on the field.

In the two games he has not started since he arrived the Raiders have given up 299 yards rushing to the Broncos (this season) and 234 to the Jaguars (last season).

Guilty of these charges or not though, Rolando clearly needs to start making some choices in his life. His future in the league depends on it. If he wants to be great, then he needs to fully commit to football. That means practicing hard, and that means staying away from situations like this.

As much as I have admired his toughness on the field and his willingness to play through pain, I have never been sold on his drive to make himself better on non-game days. This incident certainly doesn't help dissuade me from that thought.

I am certainly open to him continuing being a Raider. He can learn from these mistakes, and be the kind of professional we'd all thought and hoped he'd be. Ray Lewis was in a similar situation, that had far more tragic results, and by all appearances he has altered his decision making to avoid similar kinds of problems.

However, I am skeptical that Ro' has learned his lesson. Ray Lewis had the threat of serious jail time to help aide him in the process of maturing into a professional.

My fear is that Ro' is the kind of entitled stubborn athlete that will continue to make poor choices because he believes he is good enough to succeed through them.

Rock Cartwright summed this up when asked at some point during the happenings of the day. Here is Rock, quoted from The Associated Press:

All you can do is tell them things, try to give them help, but if they don’t want to be helped, then they won’t be helped. Once he gets back, I’ll try to put a bug in his ear and see what’s going on.

Rolando strikes me as the kind of guy that doesn't want to be helped because he doesn't feel he needs it. I imagine Rock has a similar sentiment, or he wouldn't have phrased his comment that way.