Root against the Bengals, Jets and Titans. If the Raiders don't win the division, this will be their competition for the last wild card spot in the AFC. Either the Ravens or Steelers are almost locks for the first spot. That leaves the loser of the AFC West in a heated battle with the three aforementioned teams.

So, just for the sake of this, let's say the Broncos win the division and Raiders need the wild card spot to enter the postseason.

Jump over for more number crunching....

So, let's take a look at the remaining schedules of teams involved, as found on NFL.com: 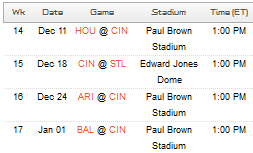 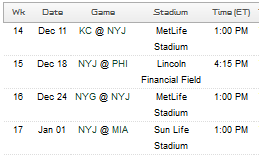 Let's look at this in terms of games the teams will likely be favored to beat.

Jets - 3 (This could be two. The Giants and the Dolphins games will likely be close to pick 'ems.)

Raiders - 3 (This could also be two, but the way the Lions are slipping, I say the Raiders will be favored.)

The Raiders are at a disadvantage for this week, but not at a huge disadvantage for the season. The Bengals would appear to be the biggest competition here. However, they looked awful their last time on the field, and they have only one win against a team with a winning record.

We definitely want the Bengals to lose this week. This will help with the tiebreaker. If the Raiders are tied with the Bengals, either just those two or in a three-way, it will come down to conference record and the Bengals currently sit at 6-4 in the AFC while the Raiders sit at 5-5.

Now, lets say the Bengals win their next three and lose to the Ravens in the finale, and the Raiders win three games—that includes their two remaining games in the division—they will end up tied in conference record.

In that case, it goes to record in common games. The Bengals and Raiders have four games—which is the minimum for this stat to be used—against common opponents. Those teams are the Browns, Broncos and Bills. The Raiders played the Broncos twice and the Bengals played the Browns twice.

The Bengals have a 3-1 record in those games. The Raiders are 2-2. This really isn't fair given that the Browns are awful and the Bengals beat them twice, but that is the way the rule is written. So, root like hell for TJ Yates and the Texans today.

If the Bengals and Raiders end up tied in record and record within the conference, it will come down to strength of victory (more on that below).

The Raiders currently trail the Titans in conference tie breaker by half a game. The Titans are 5-4. They also have the Colts and Jaguars on their schedule, while they play a Texans team in the finale that may have nothing to play for at that point.

If it is a three-way tie, the Jets are currently at 5-5 in the AFC. A three-way tie is where it gets really convoluted as it will likely come down to strength of victory.

Obviously, this number can dramatically change. However, the Bengals are likely screwed if this scenario happens.

The next step is strength of schedule and that is way too close to call at this point. The Titans have the early edge here, as all of the opponents on their schedule have combined for 97 wins.

Essentially, three teams are exactly tied. Teams that the Raiders and Jets have on their schedule have won 93 games. Teams on the Bengals schedule have won 95, but they also have two more losses as the Browns and Steelers have played one more game than every other team.

So basically, we want the AFC West teams to win and the East and North teams to lose. And I officially have a headache.