There was a little debate about who blocked the kick. Some places reported it as Trevor Scott. It was first reported as Seymour. Well, it was definitely Seymour. 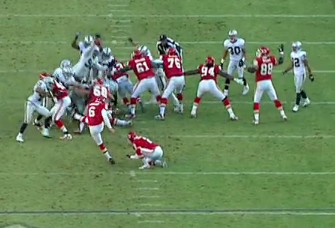 This wasn't just Big Rich jumping up blindly and hoping either. This was Seymour reaching over and swatting the ball down like he was Albert Pujols connecting on a fastball.

This block was truly a thing of beauty because it was not just Seymour. This was a total effort by the defensive front. This block wouldn't have happened had they not got a little penetration, and that is exactly what they got. The defensive line manhandled the offensive line and sent a couple of blockers to the turf.

The defensive line has not been as dominant as they were last year. However, they are fairly healthy now, and have a solid last two games. And they just saved the Raiders on the biggest play of the season to date.