Share All sharing options for: Chargers vs. Raiders Injury Report

One of the biggest reasons to root for the Raiders to make the postseason is this week's injury report. It is as small as I remember it being all season. And, preventing more injuries in this game, it will be even smaller for the first postseason game.

I don't know if Darren McFadden would be able to make it back by next week or not, but either way, this team could be as close to full strength as we have seen this year.

For this game, it looks certain that the Raiders will at least get two huge pieces to the puzzle back in Jacoby Ford and Michael Huff. In their brief period playing together, Ford and Palmer displayed great chemistry. Outside of McFadden, Ford is this team's best playmaker. He is going to make everyone on the offense better.

That said, Huff's return may be even more important. Remember those terrible late defensive meltdowns the last two weeks? There is a good chance those don't happen with a healthy Huff on the field.

RB Taiwan Jones may be back as well. Although, it sounds as if he still has some progress to make before he will be back. The Chargers have a lot of people battling injuries, but my guess is the only one that may not play is Vincent Jackson. This certainly takes away one of the Chargers best weapons. However, he was terrible the last time he played the Raiders, and was actually key in helping the Raiders secure the victory.

Jump over for the full report, from NFL.com, after the jump.... 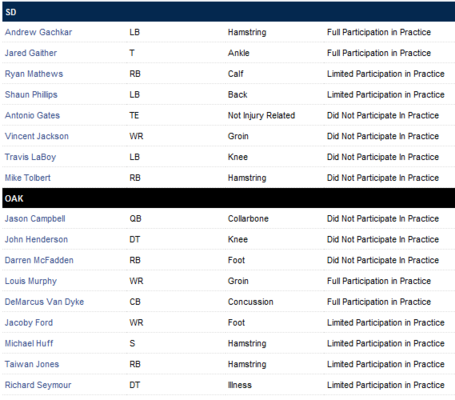