Darren McFadden is officially out of Sunday's game. No surprise there. He joins Jason Campbell and John Henderson as the only Raiders ruled out for this game. Taiwan Jones is questionable, but it seems unlikely that he'll play. Jerry McDonald reported that he has yet to run at a full sprint.

Michael Huff and Jacoby Ford are questionable, but it sounds like they are almost guaranteed to see some action. And that is great news. The defense needs all the help it can get, and Huff offers this defense a lot of flexibility in defensive packages.

Ford's return is exciting to say the least. He'll team up with Denarius Moore and DHB to give the Raiders a receiving corp that will give opposing D-coordinators nightmares.

The biggest surprise on the injury report is that Vincent Jackson is listed as probable. VJ has been suffering through injuries, and it seemed likely with the Chargers out of the race that he'd be shut down. He'll be worth keeping an eye on. I have to wonder how hard he is going to push himself knowing that a Charger victory may help save the job of the GM that has refused to give Jackson the contract he has been looking for for two years.

Check out the full injury report, as found on NFL.com, after the jump.... 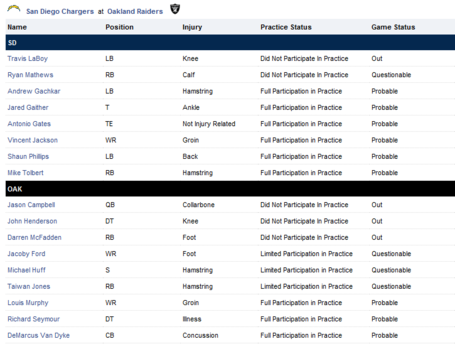