Beyond Al Davis, there is perhaps no other name more synonymous with the Oakland Raiders than John Madden. This 235 page chronicling of the life and career of this brilliant football mind is a literary achievement for Bryan Burwell, and is a must read for any fan of football, but especially fans of silver and black. From his first impressions on Al Davis himself to his induction in the hall of fame by Al and the homage to the many hall of famers who played under Madden in his illustrious ten year career as coach of those great Raider teams and all those great games, and the impressive winning records he held against so many hall of fame coaches that made it in before him. 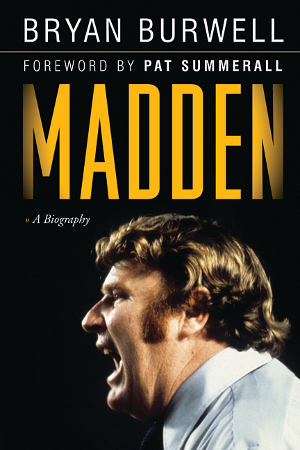 Read about how he was finally inducted and how the committees came to think they had missed the boat many times before, or about how he and Al Davis were pioneers in helping to erase the color lines that bound the league from becoming its best. Read about how he was the lone soul to stay at Darryl Stingley's bedside following the tragic incident that left him paralyzed. Read about how he called coach Tom Coughlin following their battle vs. the New England Patriots in the final game of a season to thank him for upholding the integrity of the game, and how Coughlin's replaying the speech helped spur the New York Giants to a victory over the Patriots in that super bowl. It's filled with too many great stories I'd be spoiling by giving details, and even offer some different insight on Raider incidents with which many of us are familiar. This excerpt from chapter eight, page 88, a quote from John Madden on the notion Al Davis was calling plays down to the field:

"I read that shit he would call plays in games, call down during games... Well, there was no way it could have happened. First of all, I never wore a headset. Look at any of those old NFL Films tapes and tell me when you ever saw me with a headset on. It never happened. The quarterback always called the plays in our offense. And the real truth was, while I gave the quarterback all the power to call the game the way he wanted to, I had done my work training them all week, every week since the start of training camp, to think exactly the way I think. So Kenny [Stabler] or Lamonica or Blanda may have been calling the plays, but it wasn't 'their plays'."

The book is a quick read, rife with details about childhood friend from Daly City, John Robinson and how the two would remain lifelong friends and see each other become two of the most successful football coaches in the history of the game. It reads at times like an exciting anecdotal account of so many significant moments throughout Madden's career, transporting us back to the times and moments where they occurred, and tying together so many memories we've formed from when these events took place. Even for youth who haven't had the fortune of growing up with John, you'll come away feeling as if you know this man who is hugely responsible for helping the game become what it is today.

Check out the link for where to purchase. Once again, this book is a must have for any Raider fan, and I'm certain some of us have already found and bought it. Madden's passion and dedication to the sport have made him one of those quintessential success stories. After reading the book and revisiting the subject, it's pretty clear that any coach aspiring to be great could learn a thing or two from emulating one of the best to have ever graced the sidelines. I look forward to coaching some organized ball one day, and I hope to acquire even a shred of the qualities John exemplified as a coach, and as a human being.

It was my first experience with the author, and I am now a fan for life. John, wherever you are, Raider Nation looks forward to your midas touch on our organization in whatever capacity you should deem appropriate! Thanks from all of us for everything you've given us and football in all your years.