"Trade up for Wisniewski."

"Center is our biggest weakness."

Quotes like these have been flying left and right through Raider Nation about center Samson Satele. The Raiders acquired Satele from Miami in 09. I'm baffled as to why people are bashing Samson. He's a far better center than what people are giving him credit for. After the jump, I state my case for Satele as the starting center whenever football starts again.

Sarele started only twelve games in 09 despite being healthy as Chris Morris was starting over him early on. From there they frequently rotated in and out in what was a tumultuous season for Satele. However, he did get better as the year went on as he became more acclimated to both scheme and linemates.

A rough year for sure as the Raiders stumbled to another 5-11 record. However, I still held faith in Satele. As he improved over the course of the year, so too did the stale running game of the 09 season. Satele went from bad to average, and that difference alone had the Raiders look like they were improving as the year finished. The talks of replacing Satele started intensifying in the offseason, but needs at offensive tackle and linebacker had the movement made a secondary concern.

Obviously, Satele stayed on board to the dismay of many, but the delight of myself. 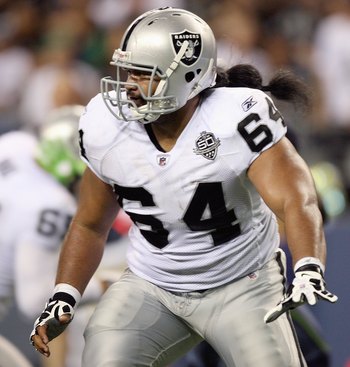 The 2010 season finally came around, as did a change to the line scheme. With Hue Jackson instilled at offensive coordinator, he brought over from Baltimore the visions of tough gritty power blocking. The idea of mixing the zone blocking scheme and the power scheme, along with a healthy Darren McFadden, had visions of 100+ rushing yard performances dancing in the heads of many.

However, questions still remained. Would the line be suited for power blocking? Is this just a gimmick experiment? Can Satele perform in the power blocking scheme?

The Raiders made sure that fans and opponents alike knew what was coming. A tough running team that would drive right in the middle a drive forward, a handful of yards at a time, until you were worn down to be crushed by a quick outside run or big screen or pass play.

Thus, Satele was given two very important duties. To spearhead the rushing attack by powering forward a gap in the middle for the backs and lead blockers to explode through; and to pull out to lead the blocking charge on the Raiders countless screen passes.

The season started slow, as did Satele. But the Raiders quickly established themselves as a dominant running team. Who was at the point of attack where most of the runs were going? Samson Satele. 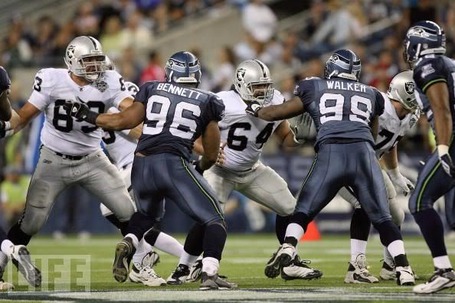 The season went on and the Raiders were looking like a potential playoff team, flourishing on a juggernaut rushing game and those dynamic screens to Darren McFadden and Marcel Reece. Satele again was right there leading the charge on several runs. While these weren't the big outside runs, he was there on the runs that set up the big plays. our yards up the middle, three between the guard and center, a five yard screen with a center lead block, four yards between guard and tackle, the defense is on their heels and breathing hard under the attrition of the Raiders running game. Then, BAM! McFadden stretch outside to the left for twenty yards and the Raiders are in field goal range at the very least.

This was the flow and rhythm of the Raiders offense through the course of a very successful 8-8 season in which the Raiders had the second best ground game in the NFL, tenth in yards per game, and sixth in points per game. Now obviously, Samson Satele is not the only reason for this startling success. Jared Veldheer and Jacoby Ford became two of the team's best players in only their rookie years, Reece became one of the premiere playmakers in the NFL at the FULLBACK position, McFadden finally lived up to his hype, and Campbell gave Oakland a winning quarterback,

However, Satele goes under the radar amidst all of the amazing turnaround of the Raiders offense. Samson Satele more than held his own. He dominated the rushing game, especially as the power blocking plays started to be called more and more. He held his own in pass protection, I mean how many times did you hear a DT get a sack? Sacks mostly came from the defensive ends or blitz backers beating the out of place Langston Walker or still acclimating rookie Jared Veldheer. Satele wasn't Pro Bowl caliber in pass protection, but it's hard to be when you have to work with Cooper Carlisle and the now departed and inconsistent Robert Gallery.

2010 alone is enough reason for Satele to stay the starter, but let's look at why Satele will be even better next year. 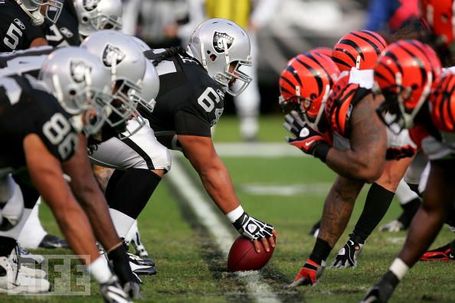 Hue Jackson is the new head coach, and he brings with him a new offensive line regime. The dynamic duo of O-Line wizard Bob Wylie and O-Line legend Steve Wisniewski combined with a predominantly power blocking scheme, and Samson Satele is already in position to excel. Satele did better in the power blocking plays from last year, and now he's getting to run those all game? And now he's getting better coaching in the scheme? In the words of Bart Scott, can't wait.

Satele may also be getting better linemates. The inconsistent Robert Gallery is out, and Bruce Campbell or Langston Walker is expected to move over to RG. Campbell and Walker are both big enough and strong enough, with high enough motors to flourish power blocking from RG, whereas Cooper Carlisle would be hurting more than helping. Plus, thoughts of Marcus Cannon or some large-and-in-charge guard coming on the left side and strengthening the middle of the line gives Satele even better support if he ever needs it.

Samson Satele more than proved himself worthy last year. I'd go as far as to put him in the upper half of centers in the NFL. And now that he's got the momentum of a great 2010 campaign behind him, and new coaches and players around him, with a scheme in place that he flourishes in, Samson Satele is poised to dominate and silence the doubters. 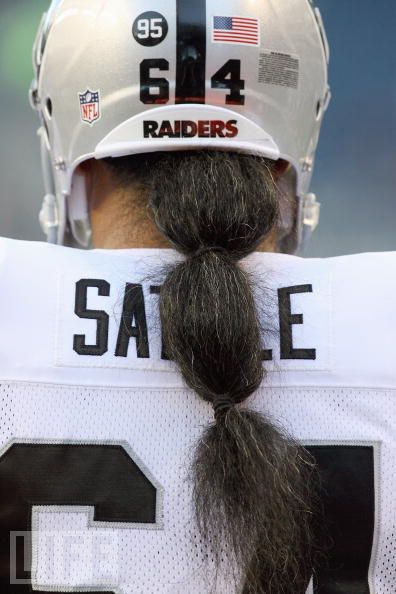 Watch these highlights of Darren McFadden and look at the middle of the O-Line on some of these plays where #64 and his crazy hair are. He's either springing the run, or keeping someone from stopping the run short. And these are mostly big plays, you'll usually see Satele show up more on those tough critical four or five yard runs mentioned earlier.