Blast from the Past: A lot has changed since then, but a lot remains the same...

Share All sharing options for: Blast from the Past: A lot has changed since then, but a lot remains the same...

During the unsure times, I'm trying hard to remain positive. I went back to a post I wrote following the 2009 season, promptly after Jamarcus started another game, much to the chagrin of most of the Nation, but I found many positives in our team then, and it turns out I was correct about much of what was posted. Here's a link to that one:

Positives to take away from this season (2009).

We looked closely at that season, the players that comprised our team, and the bright spots we were able to gleen from a dismal record finish, and the fielding of one of the biggest busts in the history of football at the league's most premier position, in an age where it's absolutely quarterback driven. We were able to see quite a few bright spots in the players, and what makes this post appropriate: the majority of those guys remain Raiders.

Hit the jump to read on about those positives, and some very, very key new ones, that I believe propel this team back to super bowl contention this year.

If I were to begin this post on what positive to take away from 2010, the promotion of Hue Jackson, a brilliant addition that propelled our offense back to top ten and saw the breakout of Darren McFadden, Jacoby Ford, and the emergence of Jason Campbell as our de facto leader. I believe I was appropriately tough on Tom Cable then, and following the less than expected results we got after paying our team highest in the league, in retrospect it seems the questions we had about Tom did manifest themselves in the horrible losses to SF, Miami, Pittsburgh, and Jacksonville to name a few, and I'm more convinced than ever this team is capable of beating the best of the best on any given day. Let's look closer at why. 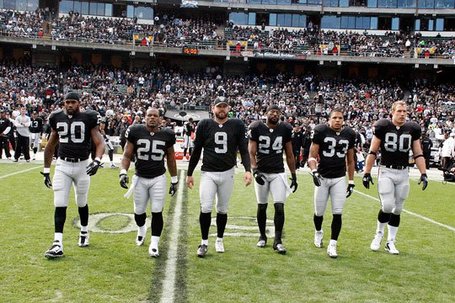 Despite the uncertainty of the CBA and free agency, our team continues to build the bully Hue promised the Nation. When Cable's contract was not extended, we saw mixed reactions to the result. While we had to wait and see if Hue would usurp TC, a faction emerged saying it was a great move, so long as Hue would be promoted to head coach. We did not know, that securing Hue would have a contageous effect on some key former Raiders, and their addition to the staff excited us, and gave hope that those of us who blamed the coaches for several losses could look forward to a new era. We continue to hope the product on the field demonstrates that coaching scared, or not to lose, will be something that left the building with Tom Cable and John Marshall. Also, then coaches avoided Oakland like the plague, and the stories about anyone who does find a career graveyard abounded. We look now at quite the different picture. What a difference a year makes. 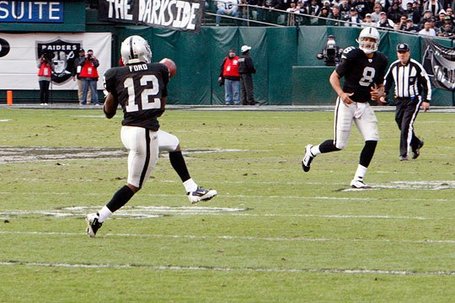 Definitely, the most key personnel addition since that post that seems so long ago now, was that of Jason Campbell. I remember his being available, and many of us saying that we needed to sign him immediately. While we failed to make any moves to bolster our horrid offensive line via free agency, we did see some nice additions in Jared Veldheer later via the draft, who became a very solid starter and should remain so for years to come, and also free agent Khalif Barnes, and the trade of Jake Groves for Samson Satele (the jury is still out on this one, but I'm pulling for Samson). It is absolutely key that we do not stand pat as we did then, and jump on upgrades to our line when the striking is hot. I also believe we will focus heavily on the offensive trenches in this draft, and look forward to seeing the value pick in Bruce Campbell work his way into the starting lineup.

With the starting qb in place, the offseason results on who backs him up will be interesting. Many here are speculating Kyle Boller will be that guy, citing the history with Hue and the apparent nod he's getting there, but I will have to wait and see what happens. I'm afraid the odds are against the fiery Bruce Gradkowskil coming back from a bad shoulder separation and the difficult and painful rehab that accompanies such an injury, especially on a quarterback who has never been mistaken for a deep ball guy. I'm leaning more and more towards adding a young, late round quarterback to the mix, who will get a dynamite staff and couple of veterans to bring him up.

The wideouts, while less than spectacular as a unit, both last year and in 2009, remain a very young and upwardly mobile group. Schilens' durability questions remain, but we know what we can expect from him when he's good to go. Murphy fell off last year from being the bright spot Jacoby was for us this year the year prior, and it's safe to say we can expect a breakout from him still. For DHB, it is a do or die year; he brings great size, strength, speed and work ethic, but still struggles to be a presence in most games, and for all the balls he caught in the offseason, still has questionable hands. As for Jacoby... what can I say? In searching for highlights and photos or our wrs, you get mostly him. Can't wait to see this guy cause nightmares for DCs everywhere again in 2011. 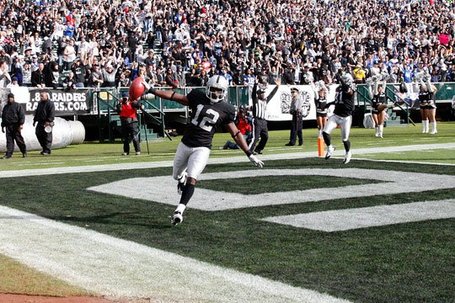 Many of us feel the addition of a veteran guy could propel this unit to legitimacy, but we remain leary of disrupting any positives we have established in this extremely young and green group. I'm confident the right guys will be worked out, and will change the face of the corps we attempted to produce last year. I'll leave the names alone for now, but I'm fairly certain we know who we really like, and for a few guys, it's almost unanimous here on Silverandblackpride.com. It's looking more and more like Patrick Peterson and Champ Bailey will line up opposite our wrs, so that big, strong, sure-handed possession guy we covet will no doubt be in full effect going forward.

2009 ushered in some new leadership too: Tyvon Branch in his hard work and dedication to get better; Richard Seymour for being... Richard Seymour; Nnamdi continued to be the ultimate exemplar for all our youth, and rubbed off on the entire secondary. This year, Jacoby set records and showed how you conduct yourself as a late pick in order to emerge as a leader for the young receivers, the offense, and special teams players by making spectacular clutch catches and showcasing his dangerous blend of speed, agility, and football instinct to earn game balls and the hearts of the collective Raider Nation. I'm excited for the next young receiver to join this group; he's coming into a great situation, and one that promises to offer opportunities to those who earn them. Even Stanford Routt emerged as a premier cornerback in the league. That's right, I said Stanford Routt.

Interestingly enough, we bring back almost all of the guys of whom we spoke highly then, and have jettisoned the Japurple drainkers and cancerous members of the locker room. We replace TC with Hue, and bring in Al Saunders to expand the playbook and continue to build around the building blocks we have. Thunder and Lightning will remain in Oakland and look to pale last year's numbers in comparison. We have our reservations about Chuck Bresnahan, but with Woodson, Biekert, Waufle, and the way Hue engages and challenges them, I'm optimistic we'll see more of the 2002 season than the others. The RB position is as solid as it has been for over a decade, and key components on the line, at TE, and WR will return as well, and even ESPN spoke of this Raider team as one that has few needs if any going into this draft and offseason, and having the luxury of focusing on BPA with many of the picks. It's also fairly deep this year at the key positions we have discussed, and if not for this work stoppage, this would be an extremely exciting draft; it still is, but the implications of the lockout on the momentum we have going into the draft are not. I'm keeping my fingers crossed.

I hoped Doty would be the assigned judge to oversee the litigations, but hold hope that judge Susan R. Nelson finds a fair and prompt outcome to the proceedings, and football gets back to business as usual.

The defense is but a few missing links away from having the identity of great Raiders' teams past that stifled the run and begged qbs to throw at us. Some say it's in the linebackers, and others the defensive backs, but we can expect the additions of HOFer Rod Woodson and super bowl teammate Greg Biekert to have some very high standards for these two units, and add that to the amazing line development under Waufle that will only continue, and you're looking at a team that, with exactly the same players from last year, could win four or five of those games we relinquished lead after lead in just by limiting opponents to fewer scores, and possibly even getting some points off turnovers, and it's highly unlikely the lb corps and defensive backfield will look the same at all. I've said in previous posts Woodson's ability to get the d backs to work more in unison with the pass rush, and to get them "facing the ball more," will help both in the run game and in the causing of turnovers to opposing offenses.

So, there are a great many reasons to be excited, despite all the very recent ones that put in question the validity of a season this year, and of our team's continuing to build on this very solid foundation we have established. The coaches, above all, excite me more than anything now, as I have felt the staff was one of the areas that needed improvement the most: especially at the head position. I also feel that Hue will have the ability to capture both the locker room and a synergy with Al that pales that which TC found in comparison. What say you, Nation? Do you agree? Forgetting about the negatives a possible lockout might have on 2011, what excites you about this year?