Raiders' beat reporter, Bill Williamson, doesn't think Bruce Gradkowski will be Jason's back-up. Not that Bruce is necessarily being cut but unlike last season when Grad was tendered for 2nd round draft pick, Raider Org hasn't made an offer. The beating Grad's throwing shoulder took last season was horrific and his trying to play with the separation caused many (ignorant fans) to doubt his ability as a QB. At any rate, it's clear that Grad's stock has fallen and may or may not recover, at least, in Oakland.

Now, the Raiders, have only drafted one QB in 50 years that amounted to anything for them - Stabler (and Kenny took 3-years before he was ready to start); the rest were mediocre at best and mainly marginal or busts. On the other hand, the Raiders have been quite successful at acquiring veteran QBs who had either lost their confidence or their starting position on an NFL team for some (explainable) reason.

Given that Grad's status is dubious and Boller and Frye are unacceptable as Oakland's #2 on the QB depth chart, there is only one viable option - bring in a veteran QB. Now, the most talented and available QB out there is none other than Vince Young. According to The Tennessean, the [Titan organization] "made it clear -- reiterating ... at last month's NFL Scouting Combine -- that Young won't be back". Young said, "I would love to stay in Nashville ...If it doesn’t happen, wherever God blesses me to be at I’ll give 100 percent." 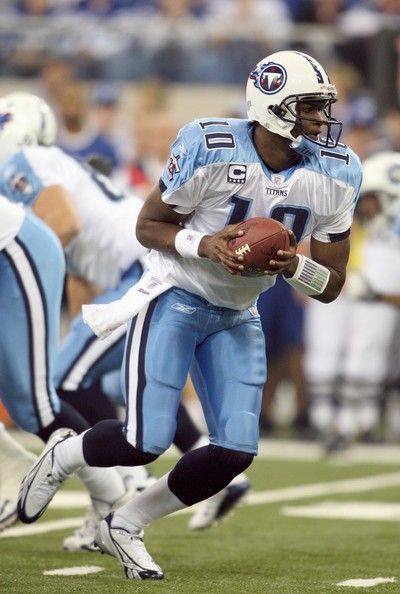 Imagine Ndamukong Suh twisting Jason's head like a water-valve. Who would you like to trot onto the field as his back-up?