The second day of the Oakland Raiders NFL lockout player only practices has come and gone. I believe this was the final day of the workouts with media availability. The information below was made available by Steve Wyche of NFL.com and Ben Beitzel's notes as passed onto Jerry McDonald of the Bay Area News Group. 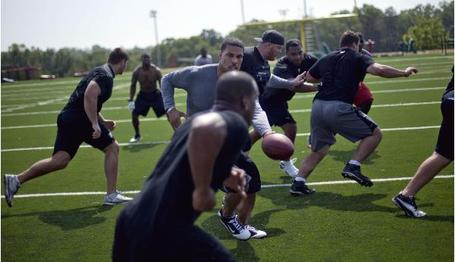 For the 7-on-7 portion of the practice the Raiders were joined by about 20 other competitive edge NFL clients including free agents Ike Taylor and Santonio Holmes. Beitzel reported that the Raiders were sharper in drills than the non-Raiders. If the lockout cuts into the season I am petitioning that this is counted as a victory.

Jump over for more notes and thoughts....

Attendance was strong for a second day. Beitzel's hand count had the number at 32. LaMarr Houston finally made it from the airport and to the workout field—news that can only be considered good for everyone involved. Desmond Bryant and Quentin Groves were the other two players signaled out for being in attendance on Wednesday, but not on Tuesday.

If the numbers and information is correct that leaves five players who must have been there on Tuesday but not on Wednesday. Rolando McClain and Bruce Campbell were not present on Wednesday, and that is disappointing on both counts. Hopefully they did not miss with injury concerns, and even more hopefully they didn't miss while faking injury concerns caused by laziness.

Stanford Routt, Joe Barksdale, Trevor Scott and Chaz Schilens were mentioned as not being in attendance and may not have been on Tuesday either. Hopefully Chaz is in his hyperbaric bubble somewhere; Scott is recovering from a knee surgery, Barksdale is a broke rookie, but what about Routt? Was his $10 million not enough to get him to Atlanta. I am sure one of the teams highest paid players has a good reason for missing these workouts.

Other players I saw mentioned as being in attendance that were not noted on Tuesday are Chimdi Chekwa and Kamerion Wimbley.

Jason Campbell gave us all a glimpse into the intentions of the offense at these practices:

The main thing for us is just installing. You are trying to get the guys to hear it as much as possible before we leave this week so when the lockout ends it won’t take guys so long to catch on. We are running pretty much all our plays, trying to install them. For the guys hearing it for the first time, it’s a different language. They’re just trying to get used to it.