I hope y'all got some great plans for the weekend preceding Memorial Day because your entertainment is not going to come from football. Not that it ever really does this time of year, but the brutal realities of the lockout are crashing down with full force. The diversion of the draft and the news of the players workouts created a mirage of normalcy, and now that they are gone I am left with uncertainty. It is always easier to wait for something when you are certain how long you have to wait. Football fans do not have that luxury.

Anyway, such is the state of the mind of the guy that just surfed the web looking for football news. There is not a lot to pass on. Unless you want to get silly in lockout news. We do have the belief expressed that Hue Jackson is one of the coaches most effected by the lockout. Jump over....

We'll begin with the end...of the Raiders workouts. They ended it all, like any good Raider should, on their pirate ship.

And from the workouts to the void of the lockout they go. It is evident by the highly organized workouts the team just had, and the highly motivated corp of players on their team that the negative effects on this team are going to be limited. Still that hasn't stopped others from suggesting Hue Jackson is one of the coaches most negatively effected by the lockout. John Clayton is the latest to put him in that category:

NFL: 10 coaches hit hard by the lockout - ESPN
8. Oakland Raiders head coach Hue Jackson: Thanks to Jackson's play calling and the work he did with Jason Campbell, the Raiders went 8-8 and Jackson went from interim coach to head coach. Owner Al Davis won't accept a drop-off or excuses, even though everyone sees the potholes in the road ahead. Jackson has to revamp the offensive line completely. He probably will lose Nnamdi Asomugha and Michael Huff in the secondary. Defensive end Richard Seymour held a Raiders workout for players this week but he did it in Georgia, where he lives, not Oakland.

So, Clayton's criticism rests more in personnel more than in a lack of time to get his system in place. That is a far more acceptable answer. Although that has little to do with the lockout. I also have no idea what the point of saying the players workout was in Georgia and Oakland has to do with anything. Hue was locked out from attending in Oakland, too.

If you like offense and Raiders history, you'll love this:

Top 12 Highest Scoring Regular Season Games - Raiders.com
The 2010 Raiders set a franchise record for points scored in a game when they defeated the Denver Broncos 59-14 at INVESCO Field at Mile High. Here are the Top 12 highest scoring games in team history.

Taiwan Jones may not be able to sign a contract yet, but that hasn't stopped him from getting his first trading card and putting on the silver and black. This pic is from his Taiwan's Twitter (Taiwan Twitter: it sounds like a band name, or a really bad STD). 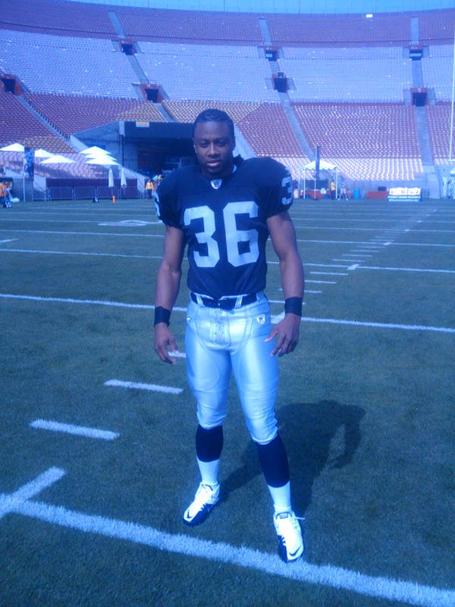 I still say 36 just does not work for him. He looks like a corner! I say change the 3 to a 2. He'd be the second coming of Napoleon Kaufman.

Taiwan talks about being a Raider and his photo shoot for the card below:

Former EWU Eagle Taiwan Jones Joins NFL Rookies At Photo Shoot - SWX Right Now-Sports News for Washington and Idaho
"It's like a home game for me, I was born and raised in the Bay Area. So being part of the Raiders, it's only right, it feels good."

In case you missed it, and you don't want to scroll the front page to see it, kick the tires on free agent, Sean Locklear.

Around the AFC West

It is the Chargers turn for Matt Williamson of Scouts Inc. to identify a rising star:

Rising Stars - ESPN
This wasn’t an easy decision. Antoine Cason came to mind, but he had a bit of a breakout campaign in 2010. Meanwhile, the running back whom San Diego traded up to land in the 2010 draft, Mathews, disappointed in Year 1. I am not excusing his play last season, but I do think that Mathews will rebound in a big way in Year 2.

I'll believe the Mathews hype when he actually produces. In the meantime, I'll expect a fumble every time he carries the ball.

Chiefs Continue Saying It's All About Competition - Arrowhead Pride
The Kansas City Chiefs are very, very big on creating competition within the organization and head coach Todd Haley usually says at some point during the year that it doesn't matter how a particular player arrived in Kansas City but what they do when they're here.

There is lots of lockout stuff from the past couple of days, but I won't ruin your weekends by tainting the Raider news with lockout poison. I'll give it its separate post today.