Share All sharing options for: 2011 NFL Lockout: Oakland Raiders Are Working Out

Just last week I posted that the Oakland Raiders were falling behind other teams during the 2011 NFL Lockout, because they were not working out. I wasn't going to let myself get down on the Raiders about it as it was early in the lockout process etc., but it was hard not to be worried. Also, it was hard not to be slightly offended. Football is these guys' profession, and I go out and throw the ball with my bros in patches of grass where we can find them, and we are only practicing for lame flag football leagues. We do it for free and we do it because we love football.

Well, then NFLanalyzer then posted a link to Jason Campbell's twitter, and helped point out my negligent reporting in the process.

So, I decided to check out the Twitter-verse myself. I probably should have checked there before posting in the first place. I started with Campbell, and lo and behold someone had linked and put the title my blog "The Raiders are Falling Behind" on Jason Campbell's page. To which Campbell had an answer...

raiders aren't behind, I was throwing with some my wry weeks ago, and no tv or paper had to know. We know, all that matters.

Now the thing I wanted to see most was Campbell working with his receivers—except for Chaz who I think we can all agree just needs to stay as far away from injuries as possible. And lo and behold there was Jason Campbell throwing with DHB and Little Blue Pills Murphy. Someone asked Campbell where 81 (Schilens) was and Campbell answered:

Translation: We don't want Dr. Glass anywhere near this field: 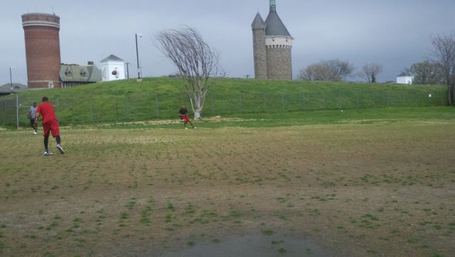 I love this pic! This is what I do with my bros (and I'm sure many of you do to) on fields that look like this! Well not exactly like this. Where the hell does Jason Campbell live? Look in the background. They had to hurry this workout along, because Harry Potter had this field scheduled for a quidditch match at 3.

Anyway, I was beginning to feel better about things. But what's up with the rest of the dudes, and why wasn't Jacoby Ford out there? So, I went to Jacoby Ford's page. Jacoby tweets enough about working out, and he and Campbell exchanged a couple of tweets, but so far it appears he is working with other players like Pierre Garcon.

Campbell also seems to be staying in touch with Darren McFadden and Michael Bush, and it sounds like if the lockout finds a more permanent label this week then there will be more of a team wide workout. Campbell:

me and sey [Seymour] already organizing workout schedule as a team.

So Raiders, you are off the hook! For now. But if this lockout persists I am going to be crawling around Twitter to make sure y'all get something more organized together. All of these guys need to start working with each other—especially the offensive line!