More on the L.A. Stadium: Some Team(s) is Going to Move There

Share All sharing options for: More on the L.A. Stadium: Some Team(s) is Going to Move There

Last week the group that is knee deep in efforts to build a new stadium in downtown L.A., AEG, had been in contact with five teams: Minnesota, Jacksonville, St. Louis, San Diego and...Oakland. The speculation was inevitable. The move makes sense for plenty of reasons—especially the Raiders cannot get a stadium built in Oakland. In a poll, 48 percent thought the Raiders would stay in Oakland, 30 percent thought they would move to L.A. and 20 percent felt it was 50-50.

While the Raiders may or may not move, one thing is for certain: If they get it built, some team is going to move into this... 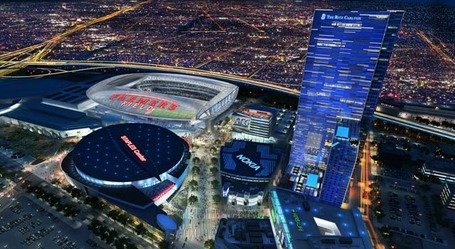 That is just way too enticing a package for some team not to make the jump. There is too much money in it from the luxury suite revenues, sponsorships, parking fees and local broadcast revenues. I know fans weren't flocking to the coliseum to see the Raiders, and that the perception is L.A. will only support a winner, but that is not the whole picture. L.A. loves an event, and that Stadium will create an event.

And the Chances are pretty good that they will be able to get a stadium built. AEG is going to put down $1 billion and they are asking the city for $350 million in bonds from the city that would be repaid through new revenue created by the stadium, including the grounds lease and self-imposed seat and parking taxes. A pretty fair deal—especially if they are able to get two teams playing there. There is enough mutual interest and need for this new revenue stream that a deal is all but inevitable. It is simply a matter of negotiating the best deal for both sides at this point.

As for who's going to play there—that is anyone's guess. An AEG source also told NFL.com that AEG has been in contact with more than five teams and that "those clubs are getting monthly briefings from AEG on the progress of the downtown project."

The stadium will seat 72,000, take 30 months to build and they have targeted a 2016 opening. None of the five teams that AEG has mentioned they have been in contact with are slam dunks. NFL.com listed reasons for each of the five teams as why the move made sense and why it didn't. For instance, the Jaguars lease runs through 2030! That's insane. Oh, and their owner came out and said he wasn't interested in moving the team to L.A.. I didn't see him say he wouldn't sell to someone who would though.

Here is what they said about the Raiders:

Why it makes sense: First, and most obvious, is the fact that the Raiders spent over a decade in the Los Angeles Memorial Coliseum and have a built-in fan base. Some crazies still make the trip up the coast for games, 16 years after the Raiders left. Also, the Raiders are in a deplorable stadium situation, with the lease expiring following the 2013 season, and rank clearly as the second team in a large, but not overwhelmingly big market (behind the 49ers). Also, seven of the team's eight 2010 home games were blacked out.

Why it doesn't: Al Davis' succession plan has been kept under lock-and-key (Son Mark Davis? CEO Amy Trask?), so that complicates matters, as does the team's previous departure for Los Angeles and subsequent return to Oakland. There are, no doubt, some in the league who don't want the NFL's future in L.A. handed to Davis. And then, there's the fact that having a second Bay Area team as part of the deal could help the 49ers finally get their new stadium built.

Chances: Like many things with the Raiders, this one is foggy. Do they make some sense? Sure. But because of the club's past, this is a sticky one.

What they failed to mention with the Raiders, but do later with the Chargers is the fact that California would prefer to add teams to the state, and not relocate existing ones.